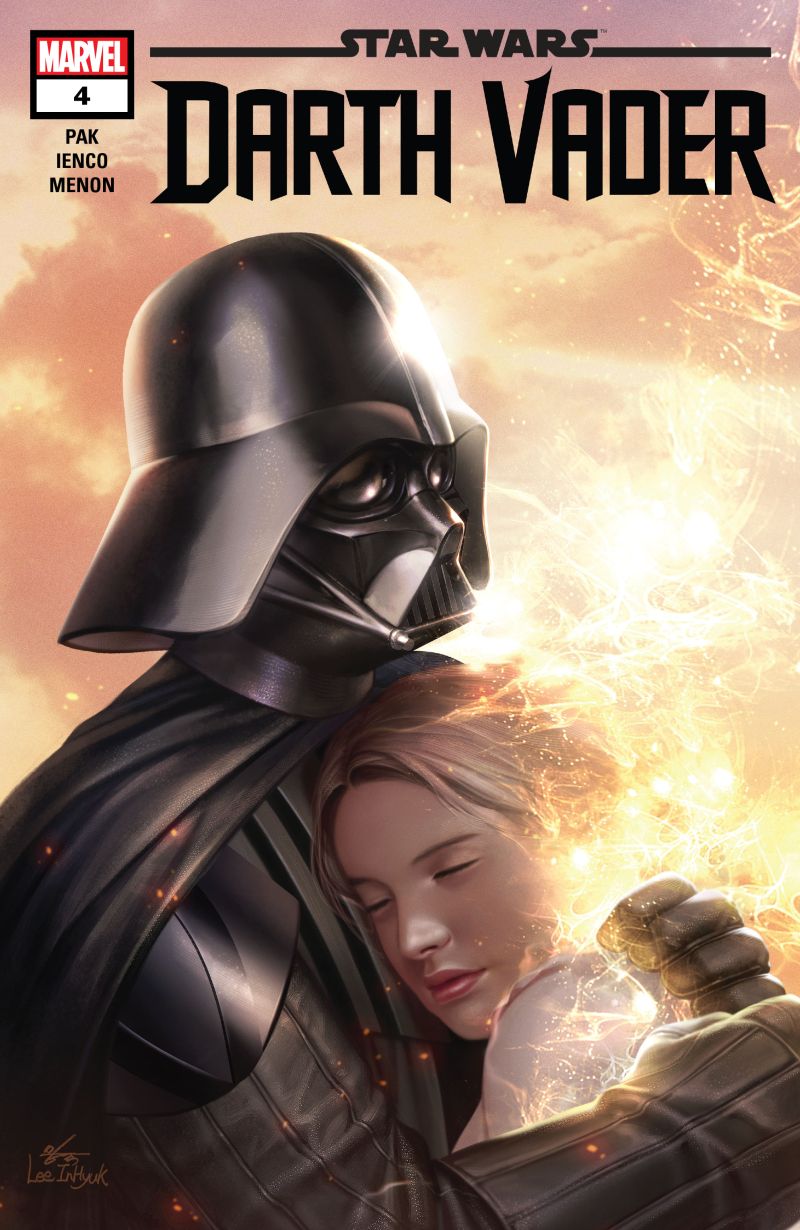 What is it ? : The Sando Aqua Beast attacks, and Vader defends himself against it, slashing it with his lightsaber, which is tiny in comparison to the massive creature. Zed-67 questions Sabe about summoning that creature to kill Vader, to which she responds, what else could?
As Vader fights the creature, Sabe, Typho and Tonra fire at the environment around Vader, to cause the ground to collapse, and for Vader and Zed to fall into the creatures mouth. Then using the Beast Caller to lure the creature away.
As it moves near the surface of the sea, the Death Troopers aboard Vaders Lambda transport strafe the creature, but Vader cuts his way out of the creature, killing it.
Zed comments that Vader is the only person on record to have killed a Sando Aqua Beast, and that the death of this 932 year old specimen increases the chance that the species will go extinct within a century to 83%.
They board the shuttle, and head into Theed city, where they are captured in Gungan energy bubbles as they emerge from the ship. A large group confronts them, with the leader introducing himself as Ric Olie, and Vader remembers getting flight lessons aboard the Queens Starship from Ric when he was young. The group is the Amidalan's, and they sentence Vader to death for the murder of Padme Amidala, Queen and Senator of Naboo, and Anakin Skywalker, her Jedi protector.
Vader asks Ric if he saw Padme die? To which responds, no, he only buried her, to which Vader declares him useless to him, and bursts out of the energy ball. He quick slaughters all of those present and strides off with Zed and the Death Troopers following.
They arrive at the tomb of Padme Amidala, where Vader is confronted once more, this time by Sabe and four other of the Queens Handmaidens, DormÃƒÂ©, EirtaÃƒÂ©, RabÃƒÂ© and SachÃƒÂ©, who swear they will not allow him to desecrate the grave of Padme. As Zed scans and identifies each of the Handmaidens, Vader remembers them, walking with EirtaÃƒÂ© and RabÃƒÂ© to meet the Gungans before the battle of Naboo, standing with SachÃƒÂ© as Qui-Gon Jinn was cremated, and Padme sharing a moment with DormÃƒÂ© when he re-encountered Padme on Coruscant when he was older.
He tells them that if they want to live, they should leave, but they attack none-the-less, and as he fights them he memories of Padme come flooding back, until he catches them all with the force, holding the entire group in the air as he chokes them as he once did to Padme. He catches a glimpse of the statue of Padme on the tomb, and he drops them, pushing them away with the force as he enters the tomb.
Inside he spots a display case showing the amulet he once gave Padme on pride of place display, remembering when he gave her it, and he remembers all the opponents he has just defeated, from the Sando Aqua Beast, to the Amidalan's led by Ric Olie, to the slowly recovering Handmaidens outside.
Sabe crawls into the chamber, asking if he is done, and Vader pushes the doors to the crypt open using the Force, responds No. . .

High Points : So the writers wanted to have some action, and they've really gone for it, with not only Vader fighting the Sando Aqua Beast, but also a horde of characters from Episode 1 and 2, and all of the various Handmaidens seen throughout the movies. And it all happens much as you'd expect, he carves his way through them all, the unstoppable force we saw him as in Rogue One.

Low Points : While it remains interesting to have Vader revisiting the places from Anakins life, and encountering those he once knew, the flashbacks in this issue are less about showing how he has changed, and more just about identifying those he meets. The Handmaidens especially, since there are a group of them, from appearances scattered across the prequel movies, it feels very much like, here's Sache, from this scene in Episode 1, and here's Dorme from this scene in Episode 2, and so on. It's really starting to feel like an episode of This is your life, "Do you remember this character from the background of Attack of the Clones, because they're here tonight!".

And while the action is interesting enough, there's definitely no threat to Vader here, when he cuts himself out of the Sando Aqua Beast after being swallowed, it really sets the tone that he is completely unbeatable.

So what do you really think ? : While it's a fun enough read, it doesn't really have the same tone as the previous issues. The series has mainly been so far about Vader reconsidering his life, being very introspective about his choices that have led to him being here, as the encounter with Luke on Cloud City has made him realise that there was a part of Padme alive which he could have spent his life with, and lies from Palpatine and Vader's own choices have robbed him of this.
But this issue is just really about showing us how bad-ass Vader is, something we're already aware of.

Final Words : To a degree there's only one other place that Padme went that Vader is yet to follow, so unless we've got more to see on Naboo, I guess the contents of the Crypt are going to lead Vader to Polis Massa, and the birthplace of Luke and Leia.
Unless of course there's going to be any kind of tie in with The Clone Wars series, which given it's all supposed to be Canon, does seem to have been completely ignored by these comics. Although keeping it focused on the movies, to which the readers will all be aware makes sense, i thought the omission worthy of at least a passing mention.