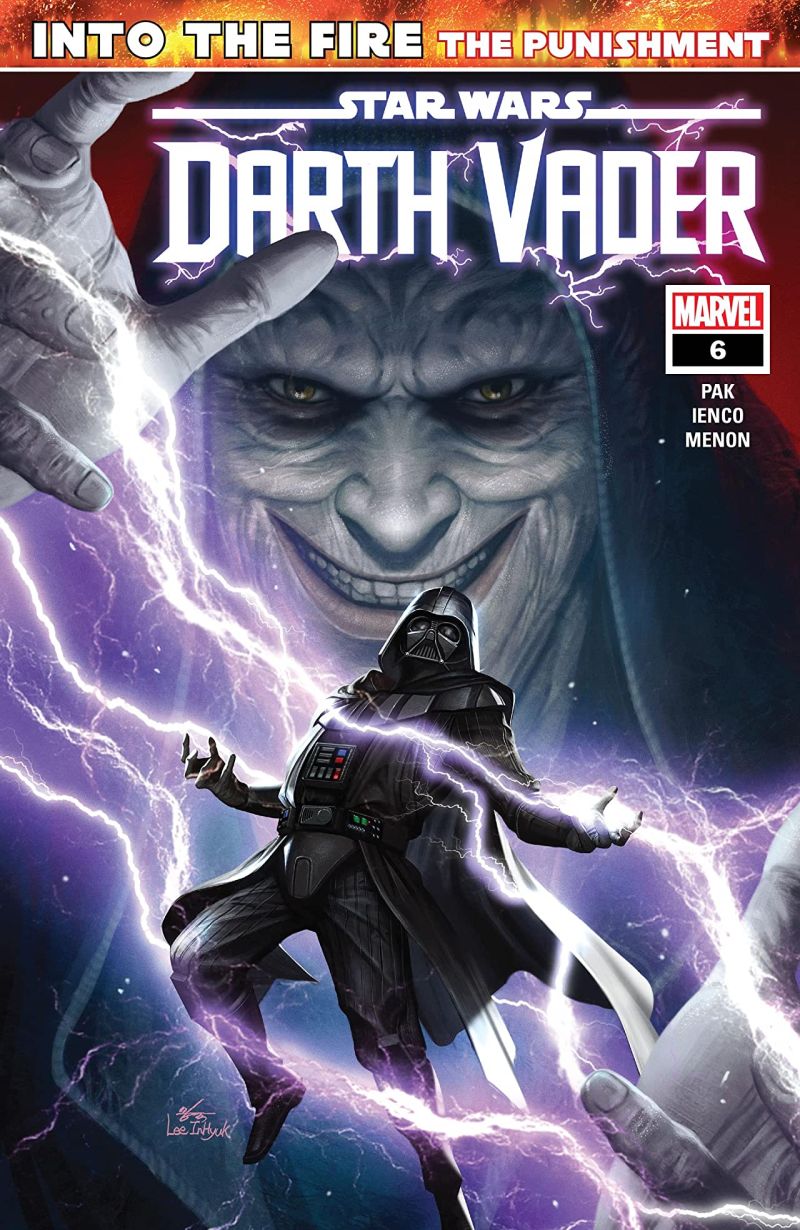 Darth Vader: Issue 6: Into the Fire Part I: The Punishment

What is it ? : Imperial officers and stormtroopers on the streets of Coruscant see lightning arcing from the tower of the Emperors Palace, the former Jedi Temple. Inside, Vader is trying to hold back the lightning with his lightsaber, as the Emperor is pleased that Vader hasn't slipped so much he can't defend himself, but Vader is confused as to why his master is attacking him.
Mas Almeda lists Vader's failure to bring back Luke, failure to return when summoned, and failure to eliminate the Handmaiden Sabe, which together could be seen not just as failure, but as treason. Summoning the Imperial Guardsmen to kill Vader, but he easily defends himself, until Palpatine snatches his lightsaber from his hands, forcing Vader to take one of the Guardsman's pikes from them, and defeat the pair.
Almeda pulls a blaster on Vader, but Vader force chokes him and the two defeated guardsmen, until Palpatine does the same to him, and Vader remembers those he has used this power on, Padme, Krennic Motti,, Piett & Ozzel.
Palpatine asks Vader how he could have become so weak and filled with fear, and Vader responds that Palpatine had lied to him, that Padme had died.
And Palpatine tells him it was that fear that he twisted to make Vader so powerful, the fear of losing Padme gave him unimaginable power, and that he must make Vader fear again to bring him back to power.
Palpatine reaches out with the force, crushing Vaders arm and legs reducing the cybernetic replacements to scrap, and telling him to forget the boy, to forget Padme, and to only think of his Emperor.
An Imperial shuttle takes them to Mustafar, where Death Troopers drag the torso of Vader, left only with his right arm, to the edge of the lava flow where Obi-wan severed those limbs. Palpatine tells him that this is where he found him and rebuilt him, dropping his lightsaber beside him, he tells Vader that this time he must rebuild himself, but he is forbidden to use the force, before leaving aboard his shuttle once more.
Vader crawls over to his lightsaber, remembering watching Obi-Wan walk away from him on this same spot, although he later got his revenge on Obi-Wan, cutting him down on the Death Star, considering the possibility of doing the same to Palpatine.
As they fly away, Mas Almeda reports to Palpatine, that Vader is heading towards the Techno Union installation where machinery resources exist, and Palpatine is happy, but decides to send Ochi of Bestoon, Assassin of the Sith to remind Vader of the fear he once felt, and of the power he could have. . . .

High Points : So we begin a new cycle of the Vader story, this time with the Emperor reducing Vader back to the state he found him in on Mustafar, and it's a great piece of imagery, seeing the Emperors power, and how easily he removes Vaders replacement limbs leaving him a cripple once more.
The continuing theme of tying these comics into the movies continues, and Vader connecting his defeat at the hands of Obi-Wan and the ultimate death of his once friend, to what Palpatine is doing to him now and what he now desires to do, is quite powerful.

Low Points : The Emperor's plan here seems a little flawed, he once saved Vader, putting him in his debt, but this time wants Vader to rise by his own power, which surely removes any loyalty that Vader once felt to Palpatine.
And given the power that Palpatine displays, easily defeating Vader, why does he even want him as his servant anymore. Palpatine must already be planning by this point to replace Vader with Luke, which might be made somewhat easier, if Luke turned up later and Palpatine is like, "Yep, I just straight out murdered your dad, hate me yet?".


So what do you really think ? : While some stuff happens in this issue, it's mainly set up for the next arc, with Vader reduced back to a crippled state and being forced to fight a Sith Assassin without the Force while surrounded by reminders of the last part of his former life as Anakin. It's an interesting set up, but not too much happens here, just everything getting put in place so we can get on with the story proper next issue.

Final Words : For those that don't recognise the name, the Sith Assassin at the end of the comic, Ochi of Bestoon is from the Sequel trilogy, and was the one sent after Rey's parents. And it was his wayfinder that Luke and Lando were looking for on Passana, which is where Rey and the others find and take his ship from in Rise of Skywalker. So this is another connection, but forwards this time as we're already aware of this characters fate and future activities.