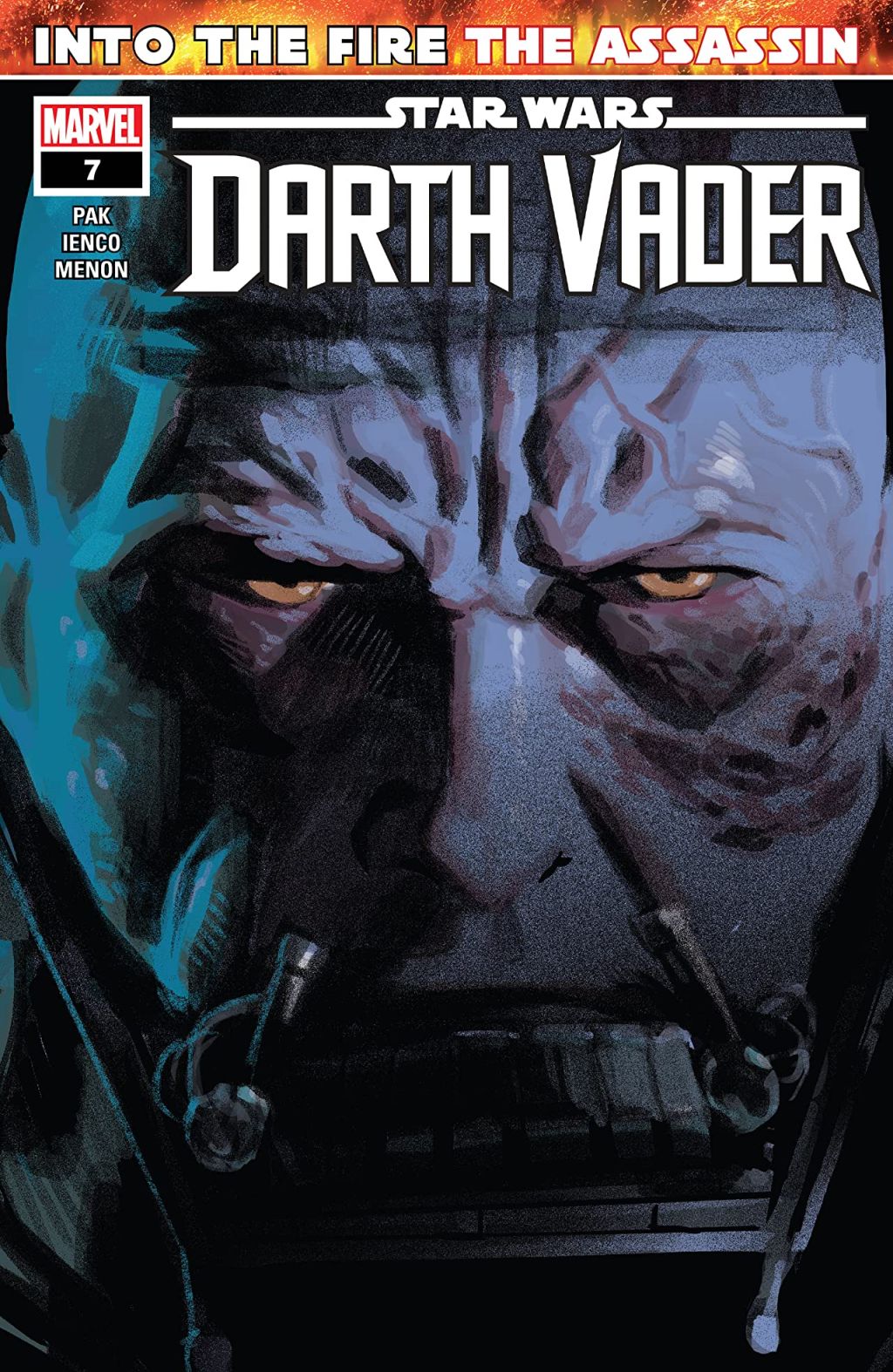 Darth Vader: Issue 7: Into the Fire Part II: The Assassin

What is it ? : Vader remembers meeting with Palpatine after his slaughter of the Jedi Younglings and other Jedi in the Temple, and Palpatine telling him to go bring peace to the Empire. Vader swears that Palpatine will know no peace, as he drags himself over the surface of Mustafar.
He reaches the installation where he once killed the leaders of the Confederacy seeing the body of Nute Gunray and remembering killing him when he is approached by a mouse droid which he grabs and reprograms. The droid heads off and brings Vader back the leg of a Battle Droid, which he and it begins attaching to one of his stumps.
Skipping forwards a short time, and witness him surrounded by several mouse droids, finishing attaching the mismatched limbs of various droids to his limbs, but just as he's finishing, Ochi of Bestoon the Assassin of the Sith arrives.
Ochi speaks as he searches the installation for Vader, saying that he saw Vader crawling across the surface to this place, and he prefers to fight opponents who can walk on their own two feet, so he hopes that Vader has made good use of the time he has given him.
And Vader leaps out of the shadows wielding his lightsaber, and the two fight, Vader questioning who Ochi is, and once he finds out, he realises that Ochi is disposable to Palpatine, not worthy of being a Sith.
Vader grabs Ochi by the throat, asking what Palpatine wants, to which Ochi only responds that he wants Vader dead, but Vader wants to know what Palpatine wants beyond that. Ochi tells him that Palpatine has more power than Vader can imagine, power that only the Emperor could build. To which Vader questions where he is building it?
But Vader hears a voice through the Force, and wades through the lava to investigate, but Ochi tries to block him as using the Force isn't allowed by Palpatines test, so Vader hurls his lightsaber at Ochi, who catches it, collapsing the tunnel that Vader is heading down onto the Sith Lord.
Vader pulls himself out of the rubble, following the voice which mocks him now, telling him that his Fury cannot solve the Riddles of the Eye of Webbish Bog, as he witnesses a spiderlike creature sitting on the head of a large statue barely visible above the lava . . .

High Points : I really like this use of Vader, as it's often forgotten that this is the boy who built C-3PO when he was a child, who built his own podracer, and is extremely technically competent. So seeing him reprogram the mouse droids to help him, and using droid parts to replace the cybernetics that Palpatine destroyed. This makes so much sense and reminds us of the talents that Anakin Skywalker had long before he became a Jedi or a Sith.

Low Points : But this reliance that the Emperor is forcing upon Vader, on the skills that he had before he ever met Palpatine, and the fact that these skills he can rely on and are making him powerful again, seems to undermine what I think Palpatine would be wanting, to make Vader reliant on him and a faithful servant once more.
Although I'll admit, at this point the Emperor might have a more devious plan that I'm not aware of yet, by making Vader rely on these skills and then showing how they are insignificant against his power.

I'm also annoyed at the supposed difference that Vader makes about Ochi being Assassin "of the Sith", but not Sith himself, as Vader himself is Dark Lord "of the Sith", so he's on pretty tenuous ground there.

So what do you really think ? : Although there's a load of interesting ideas in here, I'd like to have seen more flashbacks to the movies to connect the current action to Vaders former life, perhaps scenes with Threepio connecting to the reprogramming of the Mouse Droids, or the loss of hands (either his, Dooku's or Lukes) to the destruction of his cybernetic limbs by Palpatine.
The flashback scenes are getting more rare in this second story, and it was this exploration of Anakin/Vader that I was really enjoying in the first arc.

Final Words : Ochi of Bestoon seems set up to be the replacement for Zed-67 in this arc, but really isn't well suited to it, as although he has lots of knowledge about the Sith and their training, and about Vader himself, the running commentary seems out of character for an Assassin, where it was far more in character for an Analysis droid.