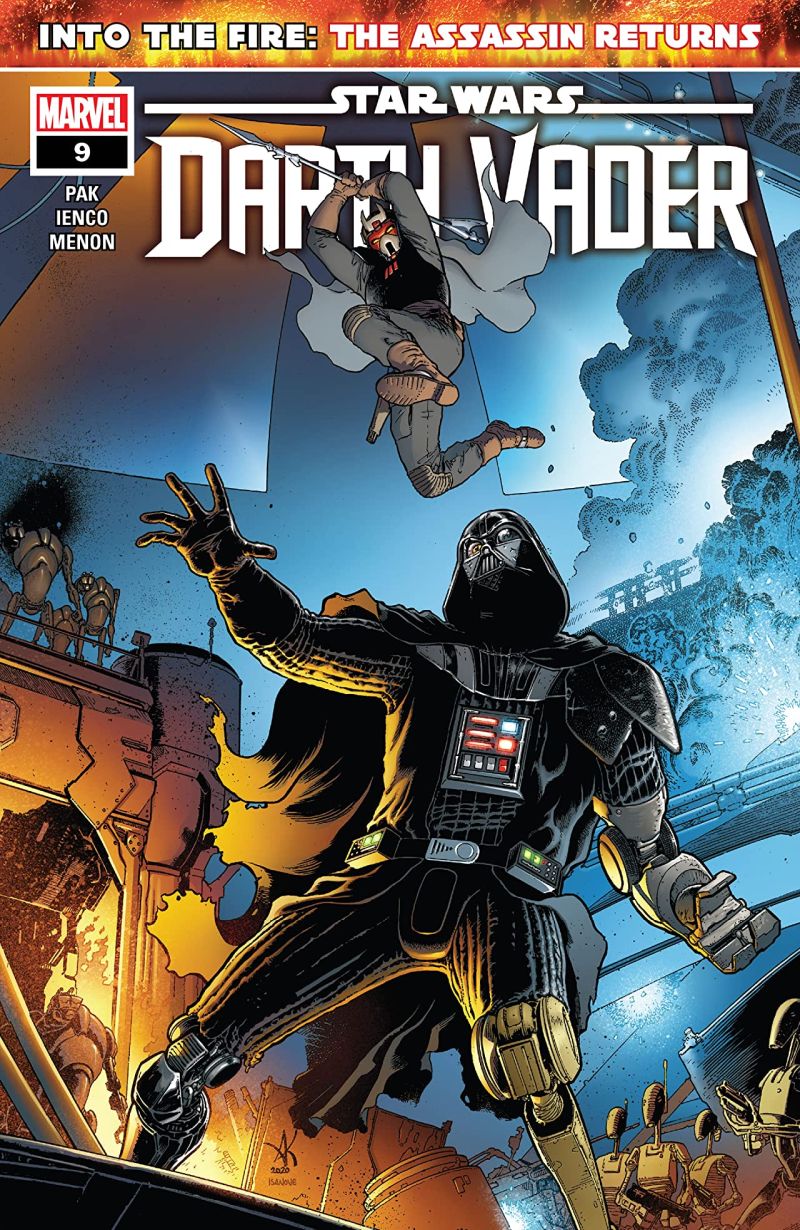 What is it ? : Ochi of Bestoon ambushes Vader while wielding Vader's own Lightsaber and being accompanied by the Droid Crush Pirates of Bestoon, who taunt Ochi that they are doing all of the work. Vader takes out one of the Droids with a piece of scrap and flees into the crumbling buildings nearby.
Due to the volcanic action, the Droids find that their thermal sensors are useless for tracking Vader, and Vader lures the Droids into firing upon each other, before they revise their tactics. They attempt to taunt Vader, telling him that they realise that someone once saw value in Vader, and Vader has a flashback to Palpatine rescuing him from this place and rebuilding him. That he had told them he wanted their parts, but they will take his. However they analyse the droid parts he has replaced his limbs with and discover that he has used out of date parts from the Clone Wars era battle droids left here.
Having scanned Vader, the Droids turn on Ochi, as he had promised them cutting edge Imperial cybernetics technology, but even the parts that Vader has not had to replace are older technology which is widely available.
As Ochi flees the Droids, Vader knocks him unconscious, and retrieves his Lightsaber, and now openly faces the Droids cutting them down although their leader cannot believe that he is capable of this without having any advanced technology.
Having dealt with the Droids, he takes their parts to repair his old Eta-2 Actis starfighter which has been sitting here since the end of the Clone Wars, and he makes an escape pod functional as well, while a bound Ochi complements his work but asks where he's going to attach an Escape Pod to a Starfighter not much larger than it.
Vader demands that Ochi help him with the Wayfinder he retrieved from the Eye of Webbish Bog, and Ochi confirms that as Palpatines favourite assassin he knows how to operate some Sith items, and programs the Navi computer of the Starfighter with runes from the Wayfinder. But Vader realises that he's trying to fool him, putting him into the Escape pod and threatening that he will die before any trap can be sprung, so Ochi shows Vader how to activate the Wayfinder. which shows him the way to Exegol.
Lifting off in his Starfighter, and Ochi calls out from the Escape Pod to not leave him behind or to let him out, but is knocked from his feet as the pod attaches to the bottom of the fighter as it begins to fly away watched by one of Vaders reprogrammed Mouse Droids.
But as he realises what's happening, as Vader docks the Pod and Starfighter with an orbiting Hyperspace ring, and shouts out that these were not designed for the load, so the docking clamps could easily fail, or the aged fighter or pod could crack open.
But neither happens and they emerge at the edge of a gas cloud, and Ochi urges Vader to make another Hyperspace jump as it's too dangerous here, but Vader tells him he will discover Palpatines secrets as a huge creature with tentacles surrounding its massive maw and central eye emerges from the cloud towards them. . . .

High Points : While it's nice to have Vader being kickass, sneaking through the ruins of Mustafar and outsmarting the Droids which are hunting him, until he regains his saber and just slaughters them. There's not a lot more to this issue, while it's got a token flashback, and rebuilding the starfighter is going back to his skills as Anakin rather than those of Vader, these are only superficially touched upon, and the entirety of the value of this issue was that the next step in Vader's journey is to Exegol so we're into Rise of Skywalker territory here as signalled by the use of the Sith Wayfinder from last issue.

Low Points : As I just mentioned, the flashbacks which explore Vader's connections to his old life and the movies is only briefly touched upon here, and this issue is just Vader being Vader, which is enjoyable enough, but not a patch on the strength of storytelling this series has shown in the past.
The idea that the droids just kind of give up hunting Vader because he's made of older technology is kind of stupid, as they don't even attempt to make peace with him, they just stop hunting him, allowing him a chance to hunt and kill them.
And while I realise that part of this series is having someone to narrate what's going on so Vader can remain a mysterious and nearly silent protagonist, Ochi is being forced into this role after the destruction of Zed-67. And I have difficulty believing that Vader would keep him alive, especially after when he's captured he still tries to trick Vader, something that the Sith Lord has shown willingness to kill someone outright for.

So what do you really think ? : This is a particularly weak issue, mopping up events on Mustafar and moving us towards Exegol, where revelations await Vader about Palpatines power that he's built. Which if it's the Xyston Class Star Destroyers, is going to create a massive plothole as to why Palpatine has a fleet of these sitting around before even the Second Death Star is complete, but doesn't use them.

Final Words : So, weird tentacle beast in space hiding in a nebula, somewhat similar to the one in Solo: A Star Wars Story. But is this going to be one of many, as it seems to be somewhat smaller than the one in the movie, or is it alone and Vader defeats it, which is why no one encounters it in Rise of Skywalker. . .