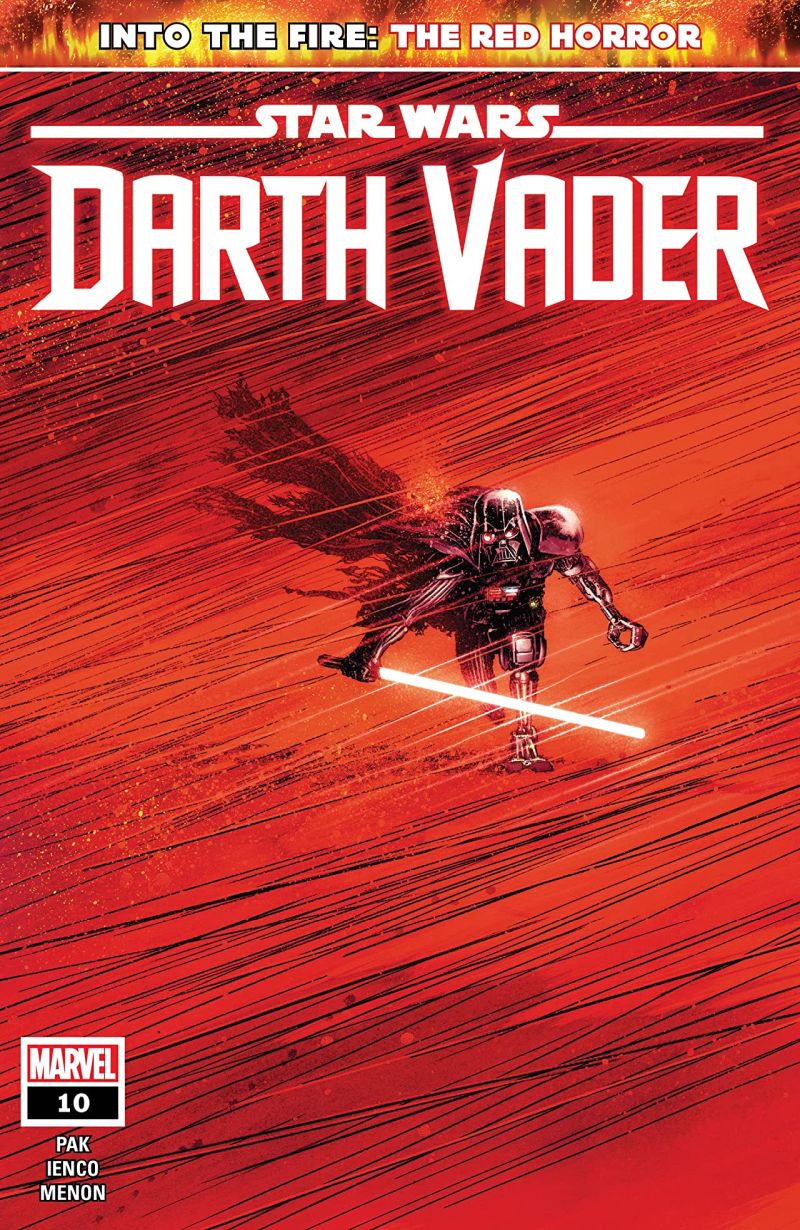 What is it ? : Vader in his reclaimed Jedi starfighter, with Ochi of Bestoon in an escape pod strapped beneath face off against a massive Summa-verminoth as it emerges from the nebula around Exegol. Ochi advises Vader to turn back, but this is also risky as a group of Star Destroyers are behind them under command of Sly Moore which open fire.
Sly tells Vader that she is here to complete Ochi's mission, but Vader tells her that Ochi failed, as will she. He agilely dodges all of their attacks, and opens fire on the lead Star Destroyer, but his weapons are ineffectual against it's shields, so Moore orders the Tie Fighter squadrons the destroyers carry to be scrambled.
Vader takes out Fighter after Fighter, destroying eleven, but Moore remarks that this is of no matter as they carry hundreds which they unleash against him.
So Vader leads the Ties towards the Summa-verminoth, but Moore tells Vader that this is no ordinary example of the species, but this is the galaxy's greatest predator, which even if it doesn't destroy you physically, will destroy you mentally.
As Vader manoeuvres past the giant creature, Moore orders the attack to stop, as she believes that not even Vader can survive the nebula.
As they fly past the Summa-verminoth, Ochi and Vader receive visions, Vader seeing various fights he has had, with the old Obi-Wan, with Luke, with the younger Obi-Wan, Luke losing his hand, and Vader as Anakin losing his limbs, but he sees further, seeing Luke cutting off his hand on the second Death Star, Vader on the ground pleading with Luke to help him destroy the Emperor, but Luke plunges his saber into Vaders chest killing him before walking away with Palpatine to his destiny.
A stunned Vader and Ochi exit the cloud over Exegol and crash to the surface, Vader recovering enough to stop the crash killing them, and the two stagger out onto the surface, with Ochi asking Vader if he also had visions, and did the creature show him how he was going to die?
The creature decends over the pair as they stand on the surface, and Ochi urges Vader to run, or no matter what the creature showed him, this is how he will die. But Vader simply responds that dying is not an option and reaches out with the Force.
Ochi tells him that is breaking the rules, that Palpatine will kill him for it, but Vader tells him that the Emperor has made many such promises, but hoped to fill him with fear. But fear leads to anger, anger leads to hate, and hate leads to power, as he leaps up onto the creature he now has mind controlled and heads towards the Emperors facility on Exegol. . . .


High Points : The format that this series has developed of telling the story through flashbacks is used wonderfully here as the mental attack of the Summa-verminoth, as it tries to distract Vader with stressful events from his past, the fights with his former friend Obi-Wan, the fight with his son. But this comes to a head as it shows him the future, so we get a flash forward to his fight with Luke on the Death Star.
But this is a possible future, as it's not the one we've seen in the movies, as Luke turns to the Dark Side, striking down Vader and taking his place at Palpatine's side.
Leaving us with the question, is this the future Vader would normally have faced, but these events change him and lead to his eventual redemption? Or is this just his fears, that Palpatine will turn his son?
Whichever, it's a nice twist, and one which motivates Vader, as he's not willing to just submit to this being his destiny.

It's also nice to see Vader being used as one of the best pilots in the Galaxy, which is after all how Obi-Wan described Anakin to Luke. He not only avoids being destroyed by a squadron of Star Destroyers, but takes the attack to them, and destroys numerous Tie Fighters which are launched against him. Again doing a good job of bringing out the elements of Anakin we don't usually connect to Vader.

Low Points : While it leads to an interesting scene as it mentally attacks Vader, the Summa-verminoth isn't a particularly interesting opponent, as it just kind of floats there looking menacing without posing any noticeable threat. The forces of Sly Moore are more interesting, but then just abandon their attack as Vader flees past the giant space beast. So this issue doesn't really feel that much of a challenge to Vader, and the space combat isn't handled as well as the lightsaber combat was in earlier issues.

So what do you really think ? : Much of the issue feels like filler, with only the mental attack scene providing much interest, the rest just leading us the next step towards Vader arriving on Exegol and discovering the Emperors secret.

Final Words : So Vader standing astride a Summa-verminoth is about to attack Palpatines secret base on Exegol, although I can't see how this is particularly threatening if Palpatine is present. Although we may be for some interesting scenes of carnage with the massive creature tearing apart Imperial defences.
What is without doubt though, is that Vader knows how to make an entrance.