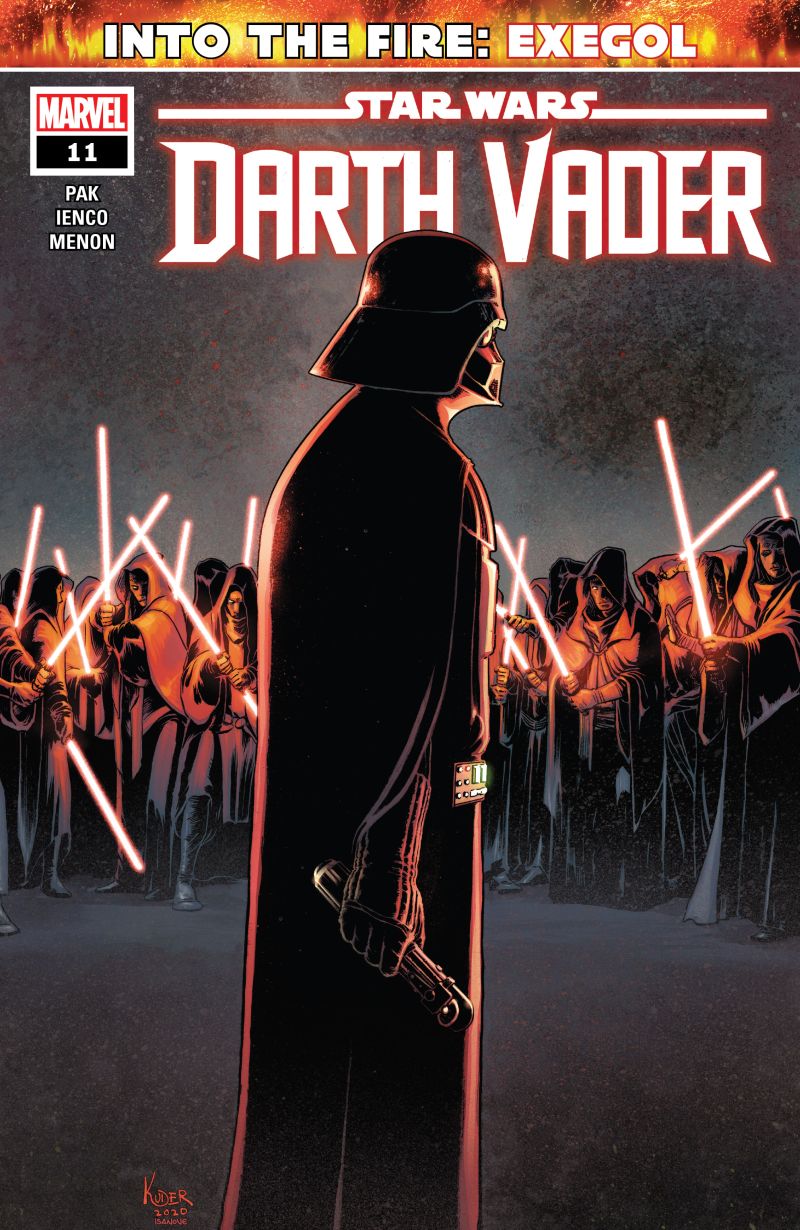 What is it ? : Ochi of Bestoon flees to meet Palpatine, warning him that Vader is here. Palpatine calls out that he left Vader weak and broken on the shores of Mustafar, asking him what that has taught him.
To which Vader responds that he wants to see Palpatine's face as Vader teaches him to fear, as he rides towards the Imperial installation on Exegol standing astride the Summa-verminoth he has mentally dominated.
The Emperor unleased two giant rancor like crustaceans against the Summa-verminoth, but the massive creature crushes them easily in it's tentacles, and Palpatine taunts Vader that there is no threat that he has not prepared for, before reaching out and force choking the immense creature and crushing it in it's own tentacles.
Vader leaps down to the ground igniting his lightsaber, but Palpatine calmly strides inside the installation. Vader follows into the chambers we saw in Rise of Skywalker, where warped and deformed clones grow in tanks, and Luke's hand is held in stasis inside it's own receptacle.
Dark Side warriors leap to attack, and Ochi comments that he thought there were only supposed to be two Sith, and Vader responds that these are not only for Palpatine to comment that they could be if Vader falls.
He battles them, shrugging off the effects of their stun sticks and hacking them down with his saber, only for hordes of more cloaked Dark Siders to attack wielding daggers, as Palpatine tells Vader any one of these could easily take Vaders place.
And Vader switches off his Lightsaber and drops to his knees, as he concentrates. Using the force he grabs the daggers out of the hands of these many dozens of warriors, and then uses these weapons to kill each of the warriors, the crowd dropping to the ground as he releases their weapons.
Palpatine comments that Vader senses it, the pain in this place, and Vader follows the feeling down beneath the installation, where he finds the fleet of Xyston Class Star Destroyers nearing completion. Ochi tells him that each of these vessels is a thousand times more powerful than anything the galaxy has seen, and when Vader comments they are only machines, Ochi tells him each will carry weapons which can destroy a planet.
Vader follows the feeling of pain and arrives at a domed temple like building, where inside he finds a massive Kyber Crystal and Ochi asks him why it screams. Vader tells him that for Kyber to serve a Sith it must suffer and they look on as hooded figures torture the crystal until it lashes out.
Ochi's helmet is dragged off, and the crystal burns his eyes out, and Vader resists as Palpatine approaches him. Palpatine tells him that this is his power, that Vader can feel it burning him, and cannot fight it, but could claim it by giving into the Dark Side and sharing Palpatines power.
As he stands there, the energy burning all around him, Vader has a vision of Luke telling him that he can destroy the Emperor, that the Emperor has foreseen it, and as Palpatine asks him once more to choose, Vader seemingly gives in and responds, "Yes, my Master!" . . .

High Points : Wow this starts so over the top, with Vader riding a massive Summa-verminoth into battle against Palpatine who sends Rancor sized monsters to fight it, before just choking it out with the Force. It's ridiculous, but very cool, and takes Palpatine and Vaders powers to silly levels (why does either of them use a Lightsaber, when they could just ride Star Destroyer sized monsters into combat.
And maybe I'm missing something, but nothing that Palpatine shows Vader really is that impressive, the fleet of Xyston's should be considered insignificant compared to the power of the Force, and I'm probably missing something about the Kyber crystal.

Low Points : The big problem for me is the Xyston class Star Destroyers, here, almost completed before the events of Return of the Jedi. Now that would make an interesting twist in RotJ, as the Rebels realise that the Death Star II is operational, and that Palpatine has hundreds of Star Destroyers which are equally powerful.
People have asked for years why it took 20 years to build the first Death Star, but only a couple to build the second larger one, but now we've also got to ask as to how they also built this massive fleet of Star Destroyers at the same time as well.

So what do you really think ? : It's totally over the top, and just a little bit silly, but it carries it off. I really enjoyed this issue, despite all of the problems in the overall universe it creates. I've always understood that Star Wars is different from normal SF because everything is supposed to be bigger, you don't have a battlestation, you have a moon sized battlestation which blows up planets, and that's what this issue kind of gets right, it really turns Star Wars up to 11.

Final Words : So that's supposedly "Into the Fire" finished and we enter the "War of the Bounty Hunters", but it seems as if we've still got some elements to wrap up here, with Ochi following Vader with bandages over his burnt out eyes, and Vader himself still using old Battledroid parts for his arm and legs. But these seem minor as we head into the next part of the story.