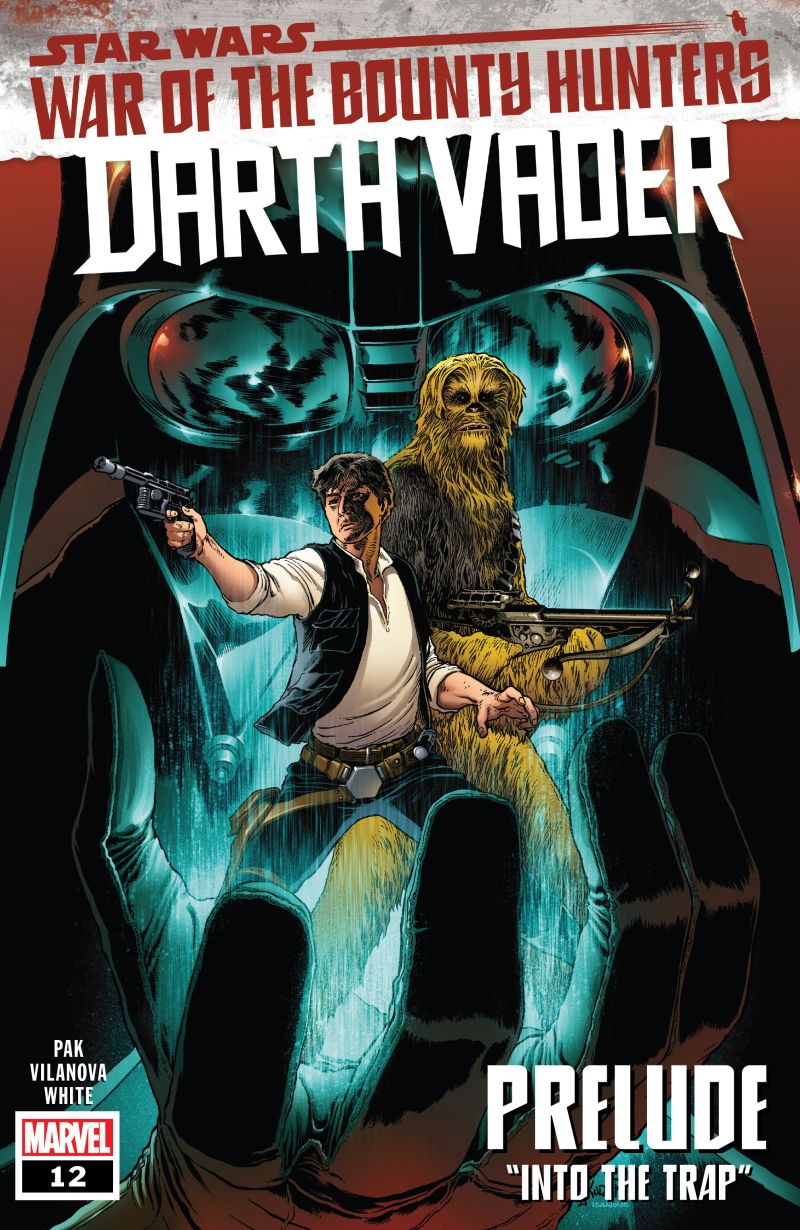 Darth Vader: Issue 12: War of the Bounty Hunters: Prelude: Into the Trap

What is it ? : The Emperor and his retinue arrive at the medical centre on Coruscant where Anakin Skywalker originally became Darth Vader and Palpatine calls for people to make way for the Return of Lord Vader, or at least what is left of him. Vader lurches in, his stolen Droid arms and legs sparking and malfunctioning, as Stormtroopers carry in the blinded Ochi of Bestoon behind him. Mas Almeda asks Sly Moore how Vader has even survived, and she tells him that he is a Sith and his Hatred gives him power.
As Palpatine orders the medical droids to restore Vader completely, Almeda asks if this is wise, as Vader wanted to kill Palpatine, but the Emperor responds that nearly everyone he has ever met has wanted to kill him and he will redirect Vaders hate to another target. Telling Moore and Almeda to not worry, he is out of Vaders reach and they are beneath his notice.
The Medical Droid offers to put Vader out, but he refuses, so is conscious as they saw his replacements and remaining arm off. And as they do, he remembers cutting Lukes hand off, wondering if that action led Luke to hate, to power, before coming to the conclusion that no, Luke is weak, and has never done anything without his friends.
Vader remember the Battle of Yavin, that he was on the edge of taking Luke out, but Han Solo's surprise appearance saved Luke. He also remembers catching up with a familiar looking YT-1300 on Corellia, and killing the Rodian captain only to be witnessed by Han Solo and Chewbacca who fled. He gave chase in his Tie Advanced, but Han hid the Millenium Falcon in a YT depot among other similar ship and Vader lost him.
As the agony continues as they cut away the broken technology and install replacements, he remembers torturing Han on Cloud City, and comes to the opinion that Luke thinks he has been saved time after time by his friends. Rather than by Vaders plans to keep his son alive, as he remembers stopping Boba Fett from firing on C-3PO and Chewbacca in the carbon freezing chamber.
As the restored Darth Vader stands free of the operating table, Ochi of Bestoon receives Cybernetic eyes, and is called upon by Vader as Palpatine tells his apprentice to choose his will, scurrying after the Sith Lord when given permission by Palpatine.
They board an Imperial Shuttle, and Vader remembers having Luke in his sights over the Death Star, and decides that this time his son must die as they depart Coruscant.
Later a heavily muscled Hutt addresses Ochi, telling him that Jabba has lost Han, and in return is told that he must retrieve him for the Empire. Bokku comments that he has not heard of any such plan to retrieve Han through his other Imperial contacts, and asks Ochi if he serves the Emperor. But is told, that no, he serves power, so they both now serve Vader. . . .

High Points : We're back into some brilliant storytelling through flashback here, as the pain Vader feels is connected with Luke's pain on losing his hand, to Han's torture on Cloud City, and follows a path laid out to Vader by the Summa Verminoth over Exegol. That Luke is being primed to replace him, so to retain his power he must kill Luke. It appears that this vision he received from the Summa Verminoth was his fears, that the son he always wanted would take everything from him and head down the same dark path he took. Thoughts obviously manipulated into Vader by Palpatine, making a wonderful deception to keep Vader until The Emperors control.

Although I'll probably comment on it again in the next issue, I love Bokku the Hutt, he's the beefcake version of a Hutt, absolutely ripped with bulging muscles. It's kind of ridiculous, but works pretty well with his six pack and broad shoulders leading down towards his tail, he's the classic inverted triangle of an athletic physique. But every time I see him I find that it's strangely funny to see this exaggeratedly male physique of a weightlifter on a Hutt.

Low Points : While this is a triumphant return to the flashback form of storytelling that has been so successful in showing Vaders thoughts throughout this series, and it works wonderfully when showing us things we've witnessed in the movies and connecting these to his current situation. I have to admit that I'm not a fan of the new content we see, Vader walks up to the wrong YT-1300, which just happens to be captained by a Rodian which wears the same clothes as Han Solo (white vest, black waistcoat and bloodstripe trousers), and when he kills this Rodian, it just happens to be right next to where Han and Chewbacca are standing.
They manage to get away on the Millennium Falcon and Vader gives chase, but they somehow manage to land in a shipyard full of other YT-1300's, and Vader somehow loses them. Then he destroys the droid which runs the shipyard when it shows him footage of Han and offers to help.
It's not a great scene, making Vader seem incompetent in not even being able to follow a freighter into a shipyard, and throwing a tantrum when someone offers to help him.

So what do you really think ? : A strong return to form for the comic which has been a little disappointing lately, as it's been too busy giving us revelations which we already knew (the Xyston class Star Destroyers and Exegol), rather than the more interesting exploration of Vaders thoughts as he discovers that much of his past is lies fed to him by Palpatine.

Final Words : We're heading into The War of the Bounty Hunters storyline, which seems to be a bit of a crossover with other Star Wars comics, so I'm not sure how relevant these will be to the Vader comic. I'd be far more interested in seeing Vader explore his own origins and Shmi Skywalkers virgin pregnancy, rather that adding in a story where Boba Fett has somehow managed to lose Han Solo's carbonite frozen body between Bespin and Tatooine.