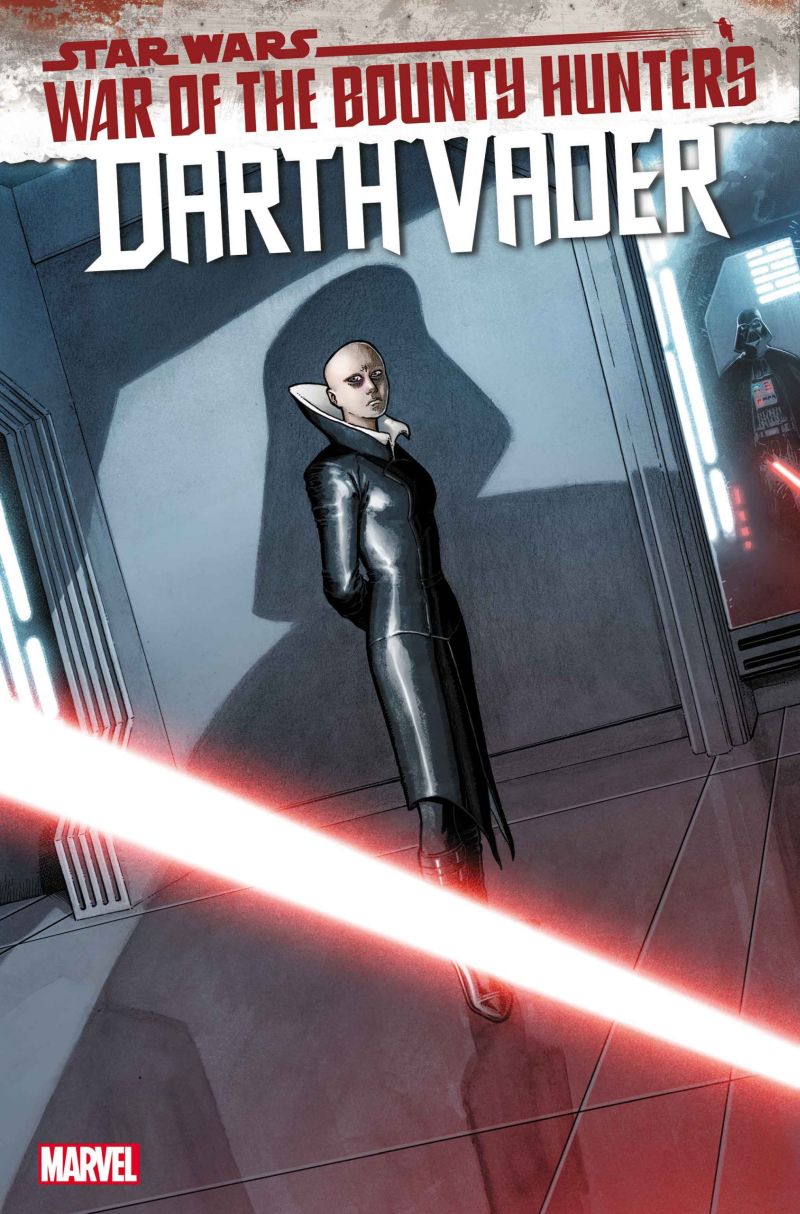 Darth Vader: Issue 14: War of the Bounty Hunters: The Blade Behind the Curtain

What is it ? : The story jumps backwards slightly to Coruscant before Vader departs, two Imperial officers are pushing a cart carrying the Cybernetic parts from Battle Droids which have just been removed from Vader. They discuss who even with these parts he still defeated a Summa-Verminoth, and how he is now undefeatable.
Sly Moore listens to them talk as she watches the restored Vader stride out of the Medical centre, and then approaches Palpatine, her head bowed and admits she failed in her mission to kill Vader. Palpatine agrees she failed, and walks away laughing.
As she turns to return to her duties, Mas Almeda stops her and asks where she is going, and when she tells him, he instead gives her different duties and she realises she has been demoted.
She attends to her new duties, which involves administering minor details from across the Empire, such as production quantities coming from the newly captured Cloud City. But one of these details is intelligence that Jabba the Hutt has put out a bounty on Boba Fett to reacquire Han Solo, and Moore recognises this as information of some value. She also discovers that Crimson Dawn is organising an auction for Solo's Carbonite frozen body.
She leaves the meeting and heads to a maintenance facility where droids are stored during their downtime, and accesses the memories of the Medical droid that worked on Vader, seeing a breakdown of his Armour and it's functions. While she is studying these, Mas Almeda enters asking why a Sub-Administrator needs the details of Lord Vaders armour, but Moore uses her abilities to convince him that it is okay, and he should forget about it and leave.
Wanders through Imperial City, seemingly accidentally brushing against various individuals as they also walk around, but passing them data cards. One of these moves to a communications terminal and hires IG-88, and later they all gather in the gardens we saw last issues where IG-88 returned to them to abandon his mission.
They are concerned that Moore has summoned them all together, but she presses that while individually they are weak, in numbers they have power, and they see IG-88's ship landing nearby.
IG-88 tells them he is abandoning his mission as Vader cannot be defeated, but Moore tells him he made a mistake in attacking alone, that true power comes from a million hands working together.
From offscreen we see a voice saying "Maybe, but he needs only two", and Vader cuts down IG-88 with his lightsaber, as Ochi of Bestoon finishes speaking.
The group begins to flee, but Vader chases them, and Moore pulls out a remote to disable Vaders armour once again, and they turn to attack the supposedly weakened Sith Lord.
However he isn't stopped this time, and easily kills all of the group except Moore, and Ochi explains that Vader already fixed that Vulnerability. Moore attempts to use her mind powers against Vader, but he slashes at her raised hands, burning one of them and telling her he is a Sith Lord, and she cannot bend his will.
Moore instead attempts psychological attacks at Vader, commenting that while he can easily defeat her, that would do nothing to save him from Skywalker, and she reveals the information about the auction of Solo's frozen body.
When pressed as to why Vader should trust her, after she sent the Phlutdroid to kill him, she replies that she cannot kill Vader, but Skywalker can, and she is only too happy to bring them together. So she is sent by Vader to buy Solo at the auction and bring him back to Vader to see if she gets what she wants.
On the planet of Jekara, the auction is being held aboard The Vermillion, the flagship of The Crimson Dawn. Moore along with Tarkins former adjutant Hurst Romodi is bidding for Solo. Jabba the Hutt is there, and bids 200 thousand credits, only to be outbid by Bokku the Hutt. The bidding keeps on increasing, with Romodi complaining that the price is now over a million credits.
Moore questions Ochi as to why Bokku who is also working for Vader is competing and driving up the price, to which Ochi tells her that they are both there just to humiliate themselves. Her failure to win this auction will show her weakness to the Emperor, and Bokku is revealing his treachery to Jabba.
She asks why, since Vader needs them, only for Ochu to explain that she almost had it right back on Coruscant, if only they could unite they'd be powerful, but Vader would never let that happen. And Vader enters the chamber, Crimson Dawn security flying out of his way as he strides into the room. . . .

High Points : While it totally changes the format of the comic, it's an interesting enough side trip as we see into the machinations of Sly Moore, and how all her planning and subtle manipulations are nothing compared to the brutality and brute power of Vader.

Low Points : So we're given the impression that Vader follows IG-88 to the meeting on Coruscant, but of course this isn't the IG-88 that Vader faced at the Hutt data centre. Which means, how did Vader know about this meeting? The only way I can think, is that back at the Hutt world, he returns to the body of the IG-88 he destroyed, accesses it's head, discovers that the droid was supposed to report back here, and turned up. But even if that's true, then Moore would have had to know when IG-88 would catch up with Vader and stand a chance of defeating him, with time to return and report! But even that makes little sense given the steps that Vader went through with Bokku to get to IG-88.

I'm also not that keen on the auction at the end of the issue, as it makes little sense, that losing a bid on Solo would humiliate Moore in the eyes of the Emperor. The idea that Vader is getting Bokku to out his treachery to Jabba is quite good, but why loosing an auction would humiliate her. Surely she can just keep bidding more and more, as the Empire has limitless pockets, or until she reaches the limits of what she's allowed to bid, and therefore it's whoever set those limits fault. It's an auction, not a test of wits, just a test of who has the deepest pockets.

So what do you really think ? : Interesting enough, but there's so much going on elsewhere in this multi comic storyline that it doesn't seem to make a lot of sense. Why has Jabba put out a bounty on Boba Fett, why is Solo being sold off by The Crimson Dawn. While I could totally be into a story where the Crimson Dawn are interested in Han Solo for his actions against them in the movie Solo, and take advantage of his Carbon Frozen form. I have no idea if that's what's going on here, there's just not enough information to go on, and I've no real interest in getting the other comics in this storyline.

Final Words : So that's me currently up to date with the Vader comic, and I'll keep reviewing them as new issues come out (the next is in around 3 months), but on a month by month basis we'll see if the story keeps my interest for long, or I give up on it, as it really does seem to me leaving behind the views into the mind of Vader that made the first few issues so interesting.