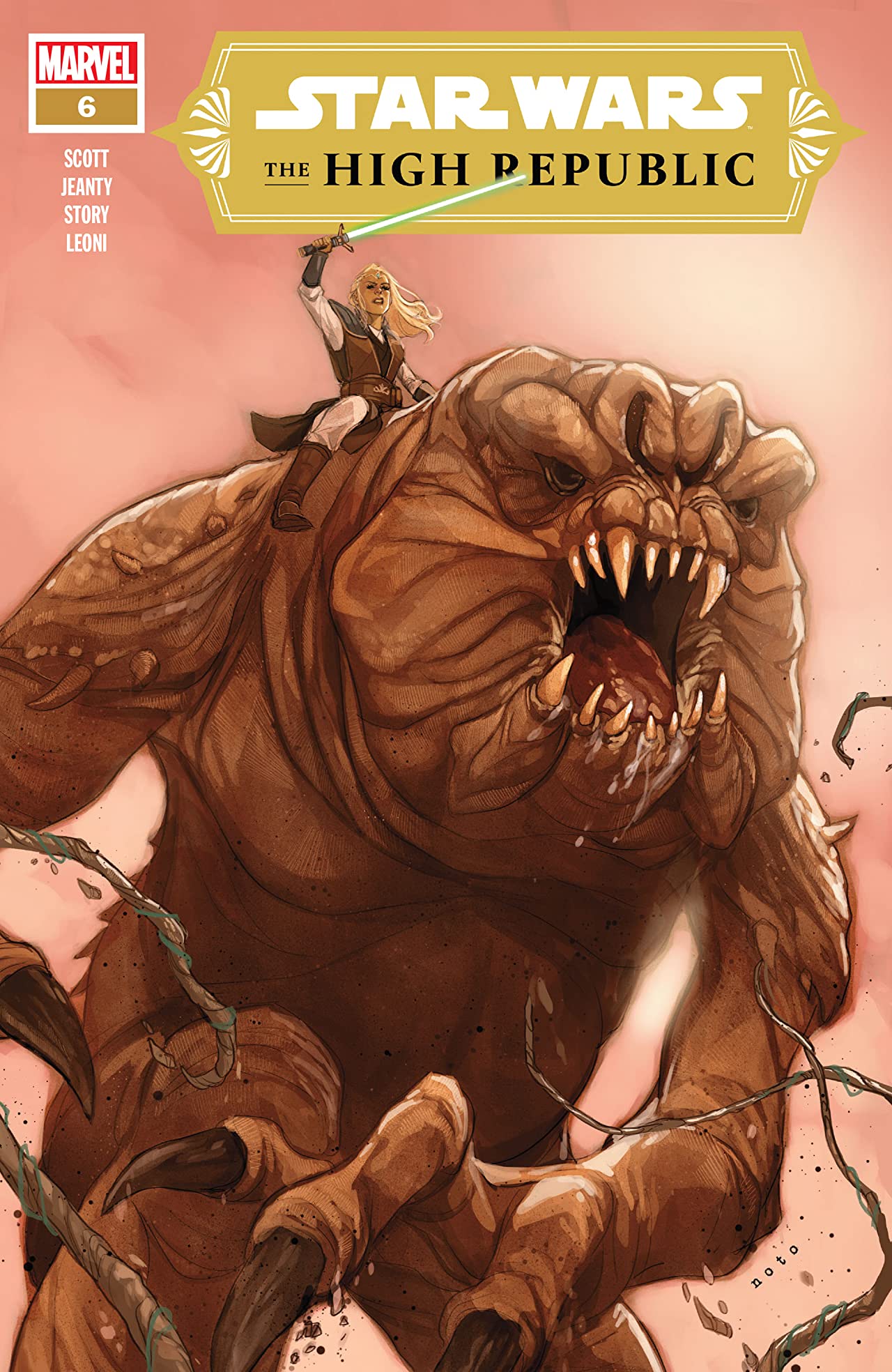 What is it ? : On the world of Daivak on the Outer Rim, the war against the Drengir has been going on for some months, the Jedi and their Hutt allies are riding Rancors into combat. Avar Kriss and Myarga the Hutt are deep in combat with the plant creatures, with Myarga telling Kriss that it would have been easier if she had allowed him to bombard the world from orbit, but she tells him that would have killed those that they are trying to save as well. Myarga seems unconvinced as to whether that is really important.
Meanwhile on the Starlight Beacon, Estala Maru reports back to Stellan Gios the progress of the war, who reports that the Jedi council is uneasy about their alliance with the Hutts, to which Maru points out the successes that it brings in the War. But Gios is remarks that the war should never have begun before asking about the condition of Master Sskeer.
In the medical bay, Keeve Trennis looks over her Trandoshan Master Sskeer, still locked in battle with the Drengir which infest his body, the medics have frozen his in stasis to hold his condition in check. She regrets their decision which ended the battle on Sedri Minor but led to the infestation and current condition of Sskeer, and asks the doctors to perform another scan, although they have run many.
Back on Daivak Jedi Ceret discovers the settlers they have been trying to save, already infected by Drengir and drained of life and nutrients., and as the battle continues Avar Kriss orders all Jedi on the Starlight Beacon to join the battle, including Keeve. But she decides that while Kriss needs all the Jedi she can get, Sskeer is fighting a battle alone so needs her help more, so she drops the stasis field and enters the chamber where the Trandoshan is, instantly getting grabbed by Drengir tendrils that erupt from her Masters body.
She finds her consciousness inside the Drengir hivemind, alongside Sskeer who she embraces. He comments that it isn't a very Jedi action, but she says she doesn't care, and he agrees, neither does he. They discuss what he has been trying to do, as he is trying to track down the progenitor of the Drengir, a weak point the Jedi could strike at and defeat the entire hive mind, and he jokes he is trying to get to the root of the problem, a joke which Keeve says indicates they're in real trouble.
Kriss and Myarga continue battling the Drengir, and Myarga begins to admit defeat, saying that the creatures respawn as fast as they can kill them, making the battle impossible, and the Jedi tells him at least he cannot hear the song of their hive mind, when they realise within that song they can hear Keeve. On the Beacon, the doctors have re-established the stasis field, and frozen Keeve inside along with Sskeer, but they can hear Keeve's thoughts as she tells them they are trying to locate the progenitor of the Drengir, but the creatures are strong and are resisting even the two of them, so the Jedi doctors lend their power to the pair as well, helping them follow the mind tendrils to a massive Drengir which continues to try to resist them. As it threatens Keeve, Sskeer rips the Drengir from within his own body, and the Drengir everywhere scream in pain as he does while linked so deeply with their hive mind.
While the pair are freed from the Drengir hive mind, and the tendrils which once infested Sskeer and Keeve wither and die, Sskeer remarks that they have failed and have no idea where the progenitor was, but Keeve has scratched some details onto her bracelet while they were deep in the hive mind, telling them that the system they are looking for is Mulito. Checking for it, it isn't listed in Republic records, however ancient records dating back to the Nightmare Conjunction tell of it existing deep in Wild Space, and the Jedi realise that the progenitor is within their grasp.

High Points : While the story is telling exactly the key moments, and showing us a massive battle as the Jedi fight at the shoulders of their Hutt allies. I do feel as if we've kind of skipped some of the interesting stuff, as I'd have liked to have seen some more of this war rather than just being told it happened (the old show don't tell rule of storytelling). But I did very much enjoy seeing the Hutts and Jedi actually fighting as allies, they've got different tactics and priorities, but there isn't any undertones of betrayal or distrust. They are fighting for their lives and totally reliant and trusting of each other, as least for now.

Low Points : But for all of the good that's coming of the alliance, the Jedi Council and others remote from the War seem critical of it. The Hutt's and their forces are fighting and dying at the shoulders of Jedi, but those not involved are sceptical about the Hutts. And for a reason which feels close to racism, the Hutts are bad because of their race, and cannot be mind read or controlled, so cannot be trusted.
But perhaps this is a moment where we're seeing how the Jedi are already falling from their lofty ideals, the Drengir are interested in only consuming animal kind, and have been plaguing the outer parts of the galaxy killing and eating the people there. But the Jedi Council are so removed from what's actually going on that they doubt the necessity of the war at all. Seemingly believing that it would be better to have no war and just let the Drengir be Drengir and eat a few settlers and hopefully be sated.

I'm getting a bit sick of them killing Sskeer off, which has happened several times now. Keeve even comments that Sskeer was losing his powers even before the Drengir infestation, but that's just brushed aside and is unimportant as he seemingly deals with the Drengir easily in comparison to every other Jedi, just tearing it from his body after many months of infestation. Stop crying wolf about a character dying and expecting me to believe or care on the third or fourth times in only 6 issues.

So what do you really think ? : While the time jump annoys me, as it feels as if the writers have been cut short and are skipping to the end of the story, the story is interesting enough putting Keeve at the core of the fight against the Drengir, although abandoning the things which make the character different and interesting.
But I really do get the feeling that we're skipping over a lot of story here, as months of fighting is just skipped over with a "The last few months have been tough on all of us." caption, if they've been tough, perhaps that would be interesting enough to show us?

Final Words : I've got a feeling that the stuff I consider above, about the Jedi council, about them falling from their lofty ideals, considering ignoring a galaxy threatening enemy just to avoid a war, and judging the Hutts just based on their race aren't going to be plot points. I think they're probably just lazy writing, so when the Hutts turn round and betray Avar Kriss, then the Jedi Council is in a place where they can say "told you so" to Kriss.

When The High Republic was planned, I remember seeing an image of a white board where they listed all of their ideas. Many of these were standard for Star Wars, such as Authentically lived in, Space & Lightsaber Battles, Mythic, Scope, Droids, etc. But many of these seemed a little "woke" to my now middle aged mind, they mentioned Diversity twice for example, and include feelings, not pro-war, & representation, not that I'm against being inclusive and accepting of everybody. And feel that Star Wars should be generally among the best at this, as not only can we be inclusive of the various skin tones, ethnicities and "races" of humans, but there are actually other races we can look at the human condition through.

But I do think that when telling a story, the story should come first, and making sure you're not being phobic or racist should just kind of generally be a thing that you just do, not something on a checklist to check off, as that just feels like corporate "wokeness", where they don't actually care about it, just know that they must do it or be penalised monetarily.
But with the way that the Jedi are treating the Hutts, unless this is a teaching point (to point out how judging someone based on their race is wrong), I feel that the writers themselves have fallen from their lofty ideals, and have just decided that a particular "race" is evil and that by mere birth you are untrustworthy.
But I could be wrong, I often am (it's becoming kind of my thing), we shall see. . . .