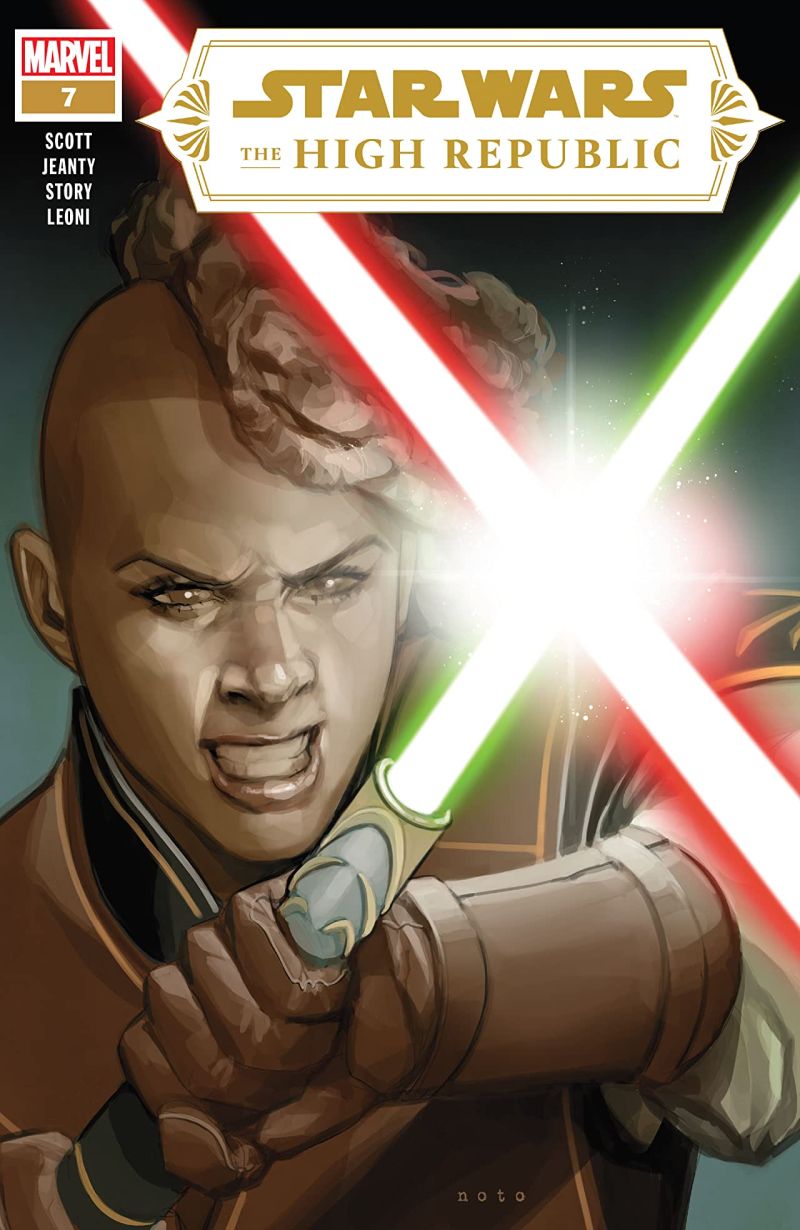 What is it ? : Keeve Trennis finds herself in a strange place, running through a forest she encounters Kanrii, the Xinpi she met in the first issue who asks why he is here. But he doesn't know, neither does Bartol one of the children she met on Sedri Minor, but he suggests that Julus might know.
But Keeve realises something is wrong, as Julus is the Rodian child who died at the hands of the Drengir, but Julus flashes a memory of Amaxine space station, which Keeve recognises but cannot remember where, when a white robed figure tells her it is on the tip of her tongue. She doesn't recognise this person and everyone disappears, and she calls out for Kanrii, Bartol Julus and the spooky ghost lady.
She is attacked by a scarred alien figure wielding a red lightsaber, and as tey fight she finds she repeats words of the Drengir hive mind, that she will protect the harvest. As they fight she moves into a circle of figures and is frozen in place, crying out in terror . . .
She awakens in the meditation chamber on the Starlight Beacon, being contacted by Doctor Gino'le who has detected her racing heart on the medical monitor she is still wearing. Keeve tells him that she is okay, and heads to meet with Estala Maru who is busy arranging Jedi movements for the many battles involved in the War, their strike on the progenitor, and the Republic Fair.
She wants to play her part, but Maru tells her she already has by locating the progenitor, but as they speak a mission comes in and Maru assigns it to Keeve as the force has provided.
Meanwhile on the world of Chortose two small Chortose are hiding in a agricultural hub, when a gas grenade gets thrown in and they are faced with Nihil warriors. As they cower, Keeve steps into the way blocking the blaster fire from the Nihil with her lightsaber and facing down one of the Nihil warriors carrying a staff when she suddenly gets a flash of the lightsaber wielder she faced in her vision.
This distracts her from the fight, but she is saved by the spooky ghost woman she also saw in her vision, who is revealed to be Orla Jareni, a Umbaran Jedi, who wears white and carries a white lightsaber.
After defeating the Nihil they speak and Keeve discovers that Orla is a wayseeker, a Jedi who follows the force, and Keeve finds it strange that the Force has not led Orla to the war. But Orla points out that Keeve has been led by her orders to the same place.
Keeve sadly tells her that is because she is a failure and the Jedi don't want her or her master Sskeer anywhere near the war as they have been corrupted by the Drengir hive mind, so that even hear she was distracted by their darkness.
And Keeve tells Orla that the hive mind told her the war was already over, and that they have lost.

High Points : I've mentioned before that one of my favourite elements about Keeve Trennis is that she connects to minor characters like children that the Jedi heroes tend to ignore, and that helps her in her adventures. That these tiny connections to those that others consider unimportant provides clues and information that otherwise would be missed. So bringing a number of these back is wonderful, getting to see Kanrii and Bartol once more, their memories seemingly helping Keeve as she recieves terrifying images from the darkness inside the Drengir hive mind, which makes so much sense.

I'm also very impressed that the information on the Drengir Progenitor hasn't come free of charge, that Keeve (and we're told Sskeer as well) are tainted by what they needed to do, and that this has made them less than trusted by the Jedi. Star Wars all too often has heroes doing miraculous things which have never been seen before, without any cost, Rey and Kylo linking through the force and passing objects between them, Nomi Sunrider cutting others off from the Force, but this is one of the first times we actually see them have to pay a price for this. I hope they keep this up, as it makes the story feel like there's actual costs.

Low Points : So we get another special Jedi, a wayseeker, introduced. Orla Jareni is a Umbaran, a monochromatic species with pure white skin, she wears white robes and carries a White Lightsaber. It's a cool look, essentially a black and white character in a colour comic, and while this makes a bunch of sense on a design basis, it occurs to me that when she was just a Padawan, or even a normal Jedi, she would have had to wear the standard Brown Jedi Robes, and probably didn't get her special white lightsaber until later, so if we ever get flashbacks of this character she'll be far more colourful.
But this isn't what annoys me about this character, it's the fact that this is yet another Special Jedi, in a Galaxy where being a Jedi is supposed to be pretty darn special, we keep getting Jedi which are unique and different, which is really annoying as Keeve herself, along with Terec and Ceret are pretty much standard Jedi, brown robes, normal coloured lightsabers, playing by the rules, but are interesting and different characters through their personalities and abilities, rather than having a special outfit and being all renegade. I suppose what I'm saying is, more of Keeve being interesting and special, and less of introducing special and interesting looking characters who are otherwise just generic beyond belief.

Im also annoyed that they're getting away from the main plotline here, although I guess that Orla will get Keeve back on track, I'm more interested in the Drengir than the Nihil, although perhaps if we saw more than what just appears to be the Star Wars version of Firefly's Reavers, then I might be more interested.

So what do you really think ? : Really not impressed by this issue at all, the vision is just trying to be confusing to be all mysterious and mystical, without actually communicating anything much. And then Keeve gets sent off on a fairly pointless side quest which is over in a page, just so she can meet another Jedi who'll teach her to be special.

Final Words : Apparently the current arc of stories, "Heart of the Drengir", ends next issue and we start a longer arc, "The Shadow of the Nihil". It really feels as if they're rushing through the Drengir war, having skipped months of fighting, and now heading into the end of it's storyline.
It's almost as if the writers are bored and just finishing it off so they can get onto their new idea about the Nihil, which I'm finding sad as I do think there's something quite interesting which is setting The High Republic era apart from the other eras in having an enemy which isn't a Sith, or even isn't particularly evil, but just kind of wants to grow and survive, but needs to consume animal based life, including intelligent species to do that.
But they seem all too willing to cast that idea aside, in exchange for more conventional ones (I read they're introducing their first Sith into this time period). . . .