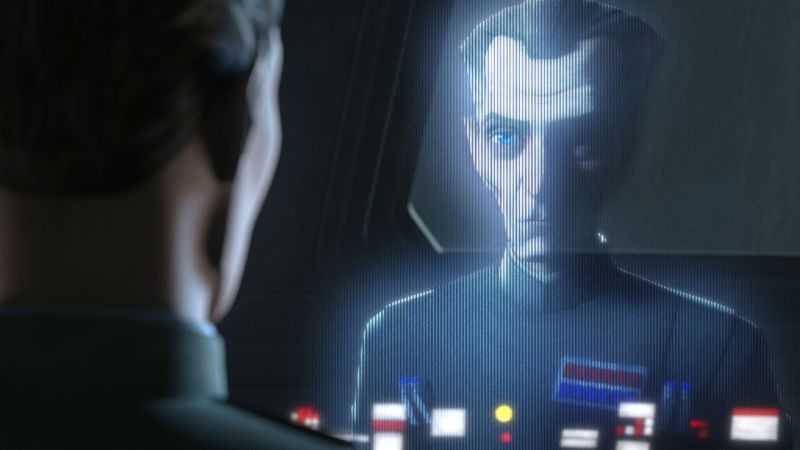 What is it ? : A Rho Class Shuttle travels through Hyperspace, aboard Hunter is being held prisoner and is visited by Crosshair who activates his transmitter. Hunter assures him that his squadmates won't fall for it, but Crosshair tells him that they will come as they don't leave people behind, normally.
On Ord Mantell the Batch are repairing the Havok Marauder from the damage it received last episode, Omega wants them to get on with it so they can rescue Hunter on Daro, but Echo tells them they've just started receiving his signal, on route to Kamino, so as soon as they ship is ready they depart.
Crosshairs shuttle arrives at Kamino and lands at Tipoca city, where Hunter is escorted through the corridors, and realises there are no clones present only TK recruits, and no Kaminoans either. Admiral Rampart meets them and tells Hunter that the destruction on Ryloth got his attention and tells Crosshair to keep to schedule, and afterwards a TK Unit tells him they don't trust clones, and Rampart tells him that some are useful, but to keep an eye on Crosshair.
Arriving in orbit, the Batch see there are only three Venator Class Star Destroyers in orbit, and they wonder where the rest of the fleet is, Wrecker thinks this will make things easier, and Omega tells them she knows of a course which isn't monitored. Taking the Havok Marauder down, Tech complains there is nothing a the coordinates to land on, but Omega tells him to get lower, and lower until they are almost in the water. When Echo detects something emerging from the water beneath them a hidden landing pad, and Omega leads them out to a secret travel pod which takes them into the city itself.
Tech notes that the tube the pod travels through isn't on any schematic, and Echo comments that the Kaminoans are good at keeping secrets, while Omega reveals that Nala-Se told her of this and it leads to her private research laboratory. As they emerge into the lab, Omega tells them they've all been here before, as this was the lab that was used to modify each of them including herself, and as they talk Azi-3 emerges from hiding telling them that all of the clones and Kaminan researchers were moved off world, with those that refused being eliminated, so he hid.
They track Hunters signal through the complex discovering that it is in the training facility, and Tech suggests using the deployment lift instead of the front door to surprise Crosshair, leaving Azi-3 and Omega behind to contact Rex if things go wrong. Entering the training chamber, they discover they are already surrounded as Crosshair predicted their action and was waiting for them to arrive with Hunter.
Instead of opening fire however, he attempts to convince them to join him and the Empire, claiming to offer them the chance they never offered him. He tells them that if they truly want to protect Omega, then dragging her around various high risk missions isn't the thing to do. That she is valuable to the Empire, and will really be safer taken offworld and away from the Bad Batch.
Hunter doesn't believe him, so Crosshair orders his TK troopers to lower their weapons, but this is the betrayal that they've been waiting for the clone to make, so refuse his order, and he fires a single blaster shot which ricochets around the chamber taking most of the TK troopers out. Below Omega realises that the Batch were captured, but refuses to go, instead beginning to activate the training droids to cause chaos above and allow the Batch to escape.
With more TK Troopers entering the room, along with the training droids a battle begins, with Crosshair fighting along with the Batch against both. Most of the TK Troopers are taken out, but one escapes and informs Admiral Rampart, who issues an order for everyone to evacuate the facility and for his Star Destroyers to move into firing position and destroy Tipoca City.
After everyone else has been dealt with, Crosshair and Hunter are left standing face to face, Hunter tells Crosshair to forget the Empire, that it is just the inhibitor chip making him behave this way, but Crosshair reveals he has had the chip removed a long time ago, and this is just him and as he reaches for his weapon Hunter stuns him.
Examining Crosshairs head for signs of the chip removal among the scarring he received when he was burned by the Star Destroyer engines back on Bracca and orders Wrecker to pick him up and bring him. The Batch goes to leave the facility, and we are shown images of places within the city which have been important but are now empty and silent, the Bad Batches barracks, the cloning facilities and the mess halls. But as the Bad Batch prepares to exit, the Star Destroyers open fire, and we see massive explosions shake the city, and we see it sink into the oceans of Kamino . . . .

High Points : It's a skillfully done episode, using many wonderful movie making techniques, but these do feel a little wasted, but Star Wars animation has never looked so good or been so well handled. From the lashing rain as they are on the surface of Kamino, to the artful images of abandonment before this place is wiped out of existence, it's beautifully artistic and a joy to look at.


Low Points : But for all of this beauty, it does feel wasted on a substandard story which seems to be skipping over some important events. We get the revelation that Crosshair has removed his chip, but is still a bad guy. And this being a revelation I can totally understand, but why is the Empire now suddenly mistrusting all Clones, why is there anti-Clone sentiment in the ranks of the Stormtroopers.
I feel as if we've missed some major rebellion by the Clones which has triggered this (which is something I was kind of expecting, as an explanation of where all the Clones go before the time of the original trilogy), but we see nothing to trigger this.
We also skip over the reason as to why Omega knows secret landing coordinates to Kamino, while I can imagine Nala-Se having such things, why would this child clone be told them when it wasn't planned for her leaving the planet. It really seems like the kind of thing that Tech should have figured out in the past, as his super power is intelligence, and he is known for not revealing things until necessary. So him having noticed the Kaminoans having a secret, figuring it out, and then only revealing that when needed makes a lot more sense than Omega deliberately being taught it.

So what do you really think ? : An enjoyable enough episode, but the revelation that Crosshair is evil because he's evil makes little sense, and the attempts to make it sad that they left him behind and abandoned him, making them just as bad as him makes little sense as he was actively trying to kill them at the time.

Final Words : So one more episode to go, and unless it's all just going to be about them escaping a submerged city (which shouldn't be difficult, as diving equipment and vehicles should be pretty standard on an ocean world), then we've got more revelations to come.