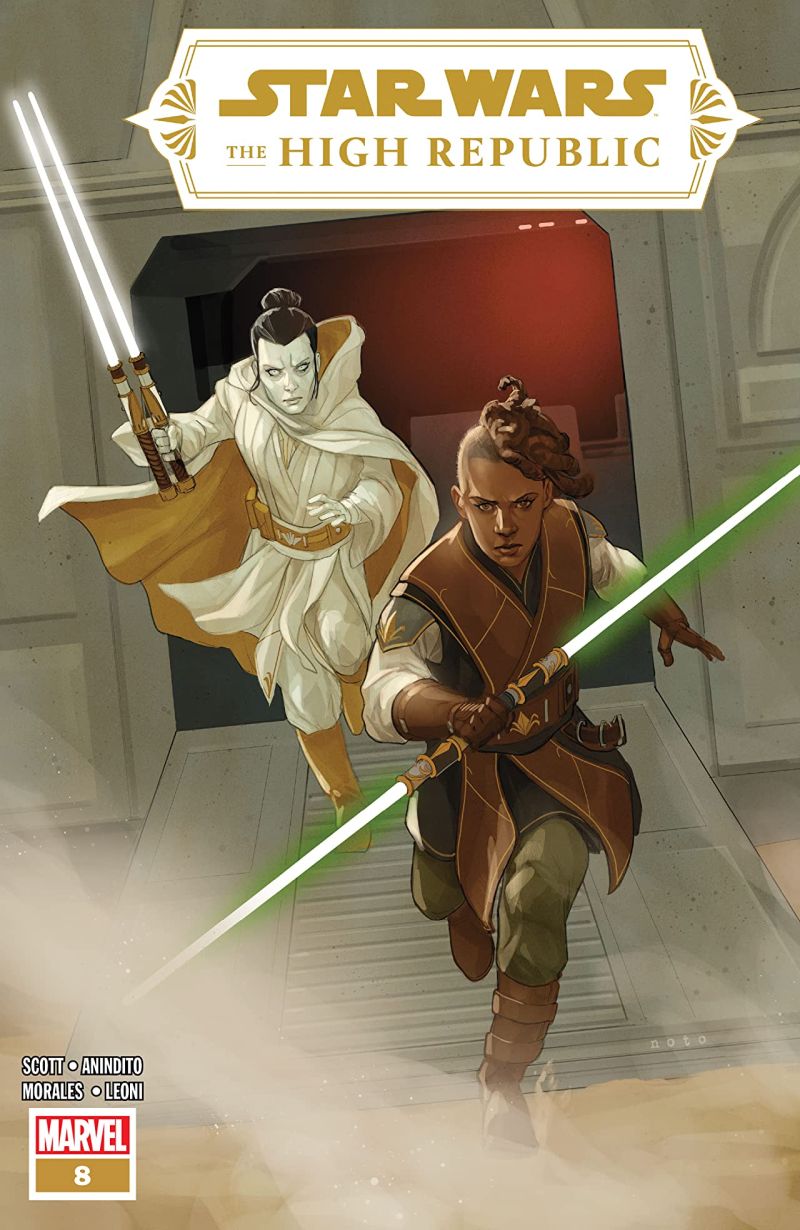 What is it ? : On the Starlight Beacon, Jedi Master Estala Maru is speaking to Sskeer who is Mulita fighting the Drengir, he requests reinforcements but none are available as the Republic Fair is about to start, but their conversation is cut short as all communications are blocked.
On Mulita the Hutts and Jedi are fighting shoulder to shoulder and have developed a repartee over the months of fighting seemingly considering each other comrades in arms. The Drengir have taken control of local arthropods, giant ant-like creatures which they field in battle alongside their own forces.
As they fight them, the head of one explodes and Myarga the Hutt thanks Sskeer for his help, only for him to exclaim that it wasn't him, and they realise that Keeve Trennis and Orla Jareni have joined the battle.
Keeve asks where Avar Kriss is, and Sskeer tells her that the Jedi Marshal is leading the attack on the Pregenitor, so Keeve rushes off to help. Arriving she discovers that the Pregenitor has taken control of Avar Kriss, and uses the Jedi Master to force choke Keeve. However Keeve tells the Pregenitor that the power of the Jedi is working together, much as the Drengir hive mind allows it to control it's forces. And together the Jedi focus through Avar Kriss and using devices that Orla Jareni has brought they manage to put the massive leader of the Drengir into a stasis field, cutting it off from the hive mind and causing the Drengir forces to cease fighting.
Seeing the Progenitor incapacitated, Myarga wants to kill the creature so that the Drengir will never be a threat again and to punish them for all of the losses in the war. However Avar Kriss says no, and as the Hutt attacks the disabled creature, Keeve blocks his attack with her lightsaber. With the Jedi united to defend the Drengir, Myarga takes his forces and leaves, the alliance at an end and the war now over.
With the departure of the Hutts and the Drengir now asleep once again, communications are re-enabled and a message comes in that the Nihil have attacked and wiped out the Republic fair while the Jedi were distracted with the war. . . .

High Points : There's so much in here which could really have made an interesting backdrop for a continuing story on the Drengir war, the way they use other species mind controlled to fight the war, from the Arthropods to Avar Kriss. The idea of weaponizing monsters and mind enslaved Jedi into their forces is incredible and worthy of far more exploration than being introduced and dropped within an issue allows.

I was also quite impressed with the tactics used by Keeve and Orla, as it's pretty much the same as I use in Strategy games, target the most powerful enemies first, as they tend to do the most damage, then you can mop up the rest later (especially as by taking out the Pregenitor they disable all of the other Drengir at the same time, so there's little point in attacking any of the other Drengir).

Low Points : I'm massively disappointed in the way they've rushed through this war in two issues, last issue we skipped over months of fighting, and then this issue not only did we miss most of the attack on Mulita and the Pregenitor, but the war just ends all of a sudden. It's not that they didn't have ideas, they had those aplenty, but instead just seemed to be done with the war and want it finished as they want to deal with the Nihil instead, who have a lot of work to do to be interesting in comparison to the Drengir who have been fantastic.

I'm also annoyed at the Jedi double standards, they happily slaughter enemies with their Lightsabers, popping the heads of the Arthropods to defeat them, but when it comes to the creature who has been behind a slaughter across the outer rim, who was responsible for the deaths of children back on Sedri Minor, the Jedi spare it's life. Despite the fact that if it escapes it will just start the slaughter all over again.
Basically they need to keep it in Stasis forever, stopping it's life by stopping it's existence in time, but they're not willing to end it's life, and end it's threat to the galaxy, by just killing it, or even by just standing aside and letting the Hutts kill it. This is a creature modified by the Sith to be a threat to the galaxy, a kind of bioweapon, but nope they must preserve it's life because that's what Jedi do.
But again, the Jedi are so opposed to killing that they each carry a sword (although that's something I've been struggling with since Return of the Jedi).

So what do you really think ? : It's a disappointing yet enjoyable read, so many great ideas, all cast aside to rush to the end of the story. I really wanted to see more of the Drengir war, some more interesting uses of their powers, and I thought the alliance between the Hutts and Jedi was a really solid foundation for conflict between the two groups as they try to work together for the common good. With the Hutts and Jedi both having their own philosophies and overcoming the differences would have made some interesting situations with the Jedi and Hutts both having to yield to preserve the alliance which they both needed.

Final Words : So next issue we're onto the conflict with the Nihil, who so far just seem to be Reavers from Firefly/Serenity, so perhaps have some interesting story possibilities to reveal why they are the way they are.