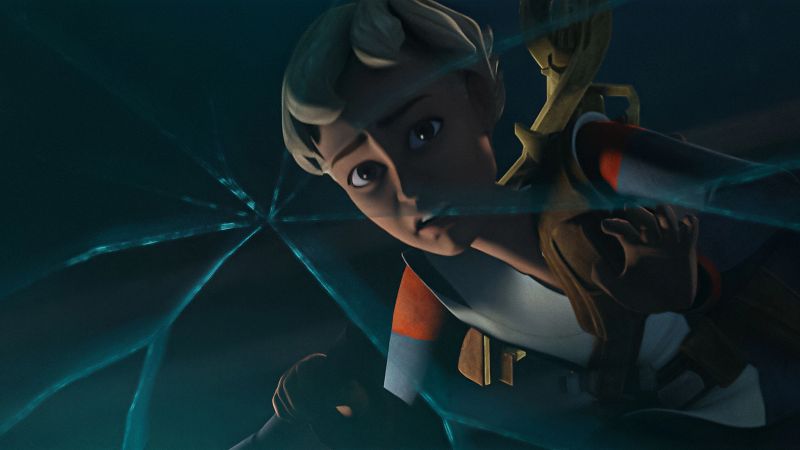 What is it ? : Admiral Rampart stands aboard a Venator Star Destroyer as it leads a squadron firing at the Kaminoan Installation below, as the city crumbles under the sustained fire, he orders his ships to leave and rendezvous with the fleet as the rain runs down the windows of the massive ship.
As the Empire bombards Tipoca City, the Bad Batch flee through the corridors, however as the platforms give and plunge into the oceans, the floors tilt and they lose their footing. As water floods into the installation, Crosshair, Azi-3 and Omega find themselves on one side of a bulkhead that slams shut to stop the water, while the rest are on the other side.
Omega recovers first, and finds that Crosshair is trapped under wreckage and the compartment is flooding, as Wrecker attempts to prise the doors open with his knife, she uses her bow to blast the wreckage free and allow Crosshair to escape just as the doors open and the water pushes them all through.
Seeking shelter from the incoming water, they discover their old quarters are one of the only few safe places, and Omega spots that they have settled onto the transit tube to Nala Se's laboratory and from there to the Havok Marauder and escape from the planet. Crosshair asks if she is now in charge, mocking Hunter and telling him he has led his squadmates to their deaths, to which Hunter tells him she has at least got an idea, which is more than anyone else has.
The cut their way into the tunnel and start making their way to the laboratory, with Hunter and Crosshair criticising each other, and Wrecker tells Crosshair that he had plenty of chances to return to them, and that they would have always have accepted him back, display obvious hurt at the betrayal especially when Crosshair mocks his intelligence. Tech reassures him, telling him that it's not worth the effort as Crosshair has always been severe and unyielding, that's just how he is, and Crosshair asks why Tech is defending him.
Tech replies that he is not, just because he understands him, doesn't mean that he agrees with him, when they realise something is moving outside the tunnel in the water. Azi-3 warns them that without power the tunnel isn't protected from the ocean life and they should move on, and as they scale finally towards the Laboratory the creature attacks drawn by their torches, but Azi-3 diverts power from the Lab and electrifies the tunnel forcing the creature away, but burns out the Labs power systems.
Inside they rest for a few moments, and Hunter asks what this place is, and Omega and Tech tell him that it is the place where they were modified. Crosshair asks how Omega knew about it, and Tech points out that she is an unaltered clone, and was there when it was done, being the oldest of them all.
They notice that the tunnel onwards to the landing platform has been smashed by falling wreckage and that they are now trapped in the lab, with Crosshair telling Hunter that's what he gets for following a child. Hunter points out that she saved his life, which is more than The Empire did, but Crosshair defends the Empire, saying that they did what needed to be done, and that the Reg's, Kamino and the Republic are all being wiped away, and The Empire will rule the galaxy.
He moves away to be by himself, but Omega sits with him for a moment, telling him that she remembered all of them being created, which is why she sought them out as she wanted them all to be together again. Crosshair tells her that just because she is a Clone, she isn't one of them and she replies that she wanted to believe it was the chip that made him like this, but she was wrong.
Echo suggests using medical chambers to escape from the Lab, as they should survive the pressure and will float to the surface, but the falling wreckage might damage them, but Crosshair mentions that Azi-3 could guide them around it, however his power is running low.
They load themselves into the glass chambers before blowing out a window and the chambers begin to rise, Azi-3 guides them around wreckage, but as his power begins to fail a piece catches onto Omega's chamber and she sinks, he uses the last of his power to cut her chamber free, but them himself begins to sink.
Omega exits the chamber and swims down to grab him. On the surface they are loading onto boats, and as they look for Omega under the water, Hunter realises that Crosshair is pointing his Sniper Rifle at him, but when he fires it, it is to fire a grapple down into the water to retrieve Omega and Azi-3.
They return to the Havok Marauder, offering Crosshair a chance to join them, but he refuses, telling them that this changes nothing. Omega thanks him for saving her and Azi-3, but he tells her they are now quits. After pausing to look at the smoking remains of their birthplace, the Bad Batch board their ship and leave, with Crosshair alone on the landing pad.
On an unnamed world, a Rho class transport escorted by several V Wing Starfighter arrives at an Imperial installation built into a mountain. Nala Se is escorted off by several Clone Commandos, and is met by an Imperial Scientist who tells her they have big things planned for her . . . .

High Points : While they travel through the wreckage of their birthplace attempting to escape the episode gives Crosshair a good chance to interact with the rest of the squad and there are a few great moments, as their conflicting points of view clash. And rather wonderfully, neither side yields, both leaving the encounter believing they are in the right.

I have to say that Tech remains my favourite character, and in my opinion gets the best line in the episode, as he recognises that Crosshair has always been like this, and that this was inevitable. But makes clear while he understands this, he definitely doesn't agree with it. Wonderfully insightful, and he of all of the squad attempts least to sway Crosshairs point of view, as he realises it would be completely pointless.

Low Points : I felt as if the monster attacking the tunnel was totally pointless, there's already enough tension with the wreckage falling from above and the glass tunnel taking damage and cracking without introducing a deep sea monster which is more reminiscent of Naboo than Kamino as apart from the Aiwha we've not seen any sea life on the planet before, especially no hostile sea life.

I also really didn't see this as a finale to the season, usually in finales we see some of the storylines of the season wrapped up, and possibly new ones introduced to bring us back next season. However, Crosshair remains almost exactly where he was at the start of the season, with the Empire and hunting for the Bad Batch. I suppose we now know he's unlikely to re-join his squadmates as it's not just the chip that's directing his loyalty to the Empire. I suppose also that the Bounty hunters seeking Omega aren't likely to return, as Nala Se is now a prisoner of the Empire and in no place to seek out Omega.
But those are really stretching to say that we've reached any place of resolution of any story arc.

So what do you really think ? : It's an enjoyable enough episode with a bunch of fairly decent action, and actually really excellent dialogue and characterisation. But it does kind of just come to an end, rather than go out with any major revelations or epic triumphs.
Which seems fairly odd, as even Resistance managed to end its first season with the Colossus revealing that it was a starship and going on the run, which is far more of a dramatic point to bring us back that The Bad Batch has managed.

Final Words : Summing up the first season, it's possibly the best first season of one of the Animated series (possibly, but I think I rate Rebels higher), but it's definitely not up to the standard that Clone wars managed in it's later seasons.
We varied between some excellent episodes, and some pretty weak ones, but it kept my interest and I never wanted to give up on it the way I did with Resistance.
They're really not taking advantage of the time period they've set it in, as many episodes (especially those on Ryloth) could have been any time during the reign of the Empire, and we only really had very occasional mentions of the changes as the Republic becomes the Empire. The Chain Codes which were so heavily featured early on, seem to have been mainly forgotten about, which seems odd as they really seemed to be something that was going to be important, although I suppose that could just be ground work for later seasons.

I'll definitely watch the next season when it comes out, but unless it improves, it's behind Rebels and The Clone Wars for me, although it does manage to easily beat Resistance.