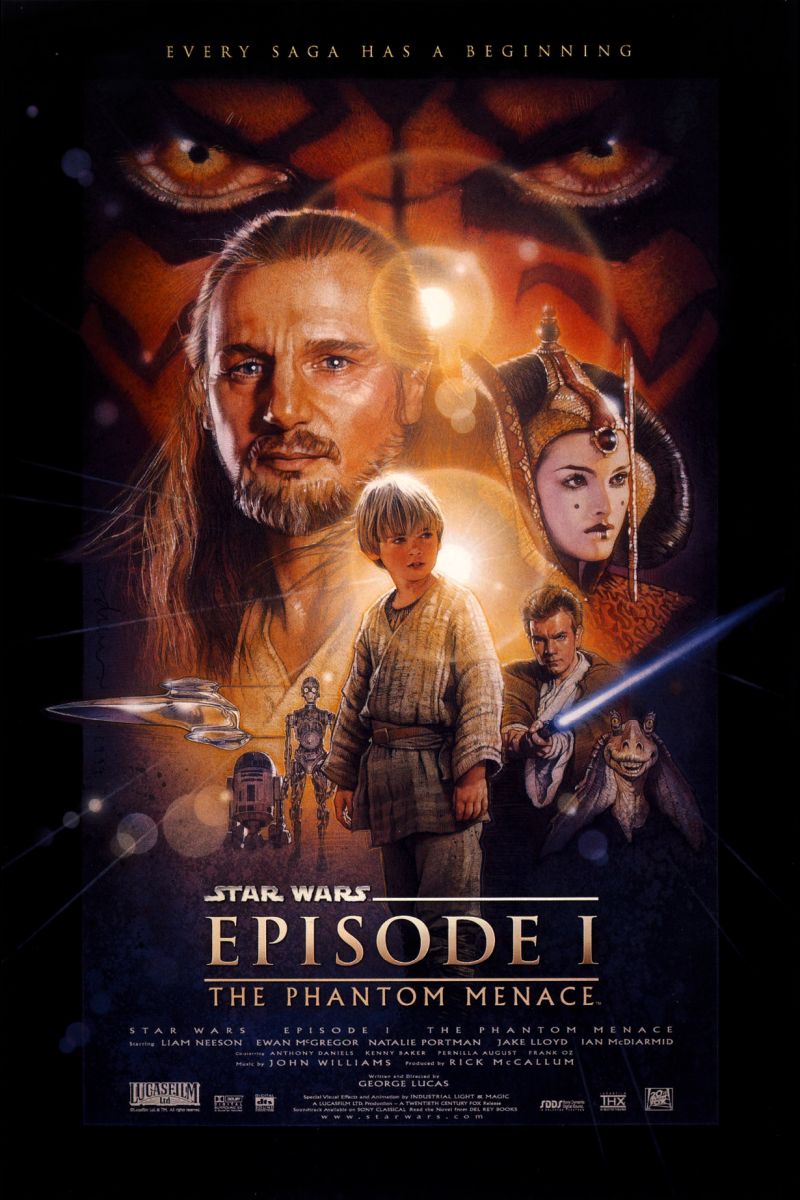 What is it ? : The Trade Federation has blockaded the world of Naboo, attempting to protest new taxation on trade routes, so the High Chancellor of the Galactic Senate sends a pair of Jedi to negotiate.
The two Jedi, Qui-Gon Jinn (Liam Neeson) and Obi-Wan Kenobi (Ewan McGregor) however are ambushed and fight their way off the Trade Federation ship the arrived on. They head down to Naboo meeting a native of the world, a Gungan called Jar Jar Binks, who helps them acquire a submarine to travel to the Capital. Arriving in the capital they discover a full invasion has been triggered, so they rescue the leader of the world, Queen Amidala (Natalie Portman) and escape from the planet aboard her royal transport.
As they escape from the planet the transport is damaged, and they are forced to stop at the desert world of Tatooine for parts, but Tatooine isn't part of the Republic so they don't have any local currency.
They meet a young slave, Anakin Skywalker (Jake Lloyd) who they team up with to gamble their small amount of resources into the parts they need by him winning a Pod race. Qui-Gon discovers that Anakin has latent Jedi powers, with ratings higher than Jedi Master Yoda.
Anakin wins the race, and Qui-Gon negotiates to free Anakin, although Anakins mother Shmi remains a slave. As they prepare to leave, they are tracked down by a Sith Warrior sent by the person behind the Trade Federation Invasion, Darth Sidious.
Qui-Gon fights the Sith warrior, Darth Maul, but they escape and head to the capital world of the Republic, Coruscant. Arriving they are met by the Chancellor, Valorum, who is described to Queen Amidala as a good man, but one controlled by others so incapable of action. And when she witnesses this in the Senate, she calls for a vote of no confidence in Valorum, unseating him and starting an election process which she hopes will lead to the Republic electing someone who can act to save her homeworld.
At the same time, Qui-Gon takes Anakin before the Jedi High Council to have him accepted into the Jedi order for training, believing that Anakin meets the criteria for a prophecy where he will bring Balance to the Force. But the Jedi decide that Anakin is too old, and too full of fear to be trained, and send Qui-Gon and Obi-Wan back with Queen Amidala who has decided to return to Naboo to fight the Trade Federation while the political machinery turns on Coruscant.
Returning, they go to the Gungans, and Amidala pleads with them to help free their world, to which the leader of the Gungans agrees. While the Gungans engage in open battle with the Trade Federation army, Amidala and the crew of her starship along with the two Jedi and Anakin attack the Royal palace with the aim of capturing the leader of the Trade Federation and forcing a surrender.
They breach the palace, and the pilots take a number of Starfighters to attack the ship which controls all of the Trade Federation battle droids which make up their armies. But they once again encounter the Sith Warrior, Darth Maul, who Qui-Gon and Obi-Wan battle, as Anakin takes refuge in the cockpit of one of the Starfighters which autopilots to the rest of the squadron in combat above the world.
Anakin crashes into the hangar of the Trade Federation ship, launching torpedoes which destroy the ships reactor, ending the Gungan battle below in their favour, just as Amidala captures the leader of the Trade Federation and forces a surrender.
As they fight, Qui-Gon and Obi-Wan get seperated by a force field, allowing Darth Maul to stab Qui-Gon through the chest. Obi-Wan joins the fight when the shield drops, and manages to beat Maul, cutting him in half with his lightsaber.
After the battle, Palpatine, Naboo's senator on Coruscant arrives. And announces that due to sympathy with Naboo he has managed to win the election and is now High Chancellor of the Republic. The people of Naboo celebrate, and the Jedi hold a funeral for Qui-Gon, with the Jedi Council accepting his wishes that Anakin be accepted into the order as a Jedi, putting him under the tutelage of Obi-Wan.

High Points : The excellent parts of The Phantom Menace are the action scenes, with the Lightsaber battle between Obi-Wan and Qui-Gon and Darth Maul being absolutely spectacular, accompanied by a fantastic piece of music by John Williams named Duel of the Fates.
Likewise the Pod Race is amazing to behold, with the chariot like Pod Racers streaking across the desert and through canyons and caves.

And I have to complement Ewan McGregors impersonation of Alec Guiness, which is nearly parody, but makes it extremely clear this is the same character as that we saw in the original movies.

Low Points : Now, many people criticize Jar Jar Binks, who is one of the many near racial stereotypes in the movie who I could understand people finding offensive. However, the actual criticism is about him being clownish, something I personally don't have much of a problem with.
My biggest problem with the movie is that it really doesn't make a huge amount of sense. The Republic sends a couple of warrior monks to negotiate an end to the Trade Federation blockade, surely the role of a politician.
Also the plot behind the scenes is that Palpatine is Darth Sidious, who has arranged the blockade and invasion to promote sympathy for his situation and force a vote of no confidence in Chancellor Valorum so Palpatine can become leader of the entire Galaxy. However, he then dispatches his apprentice, the Sith warrior Darth Maul to chase down the Jedi and Amidala.
But why? The invasion has occurred, and Amidala is coming to Coruscant with the news, forcing the vote of no confidence. This is exactly what he wants, so why send someone to stop them? It only gets worse, as after everything is in place, he then sends Maul once again to Naboo, but as we see, defeating the Trade Federation has no effect on Palpatines plans, as he is already becoming Chancellor.

So what do you really think ? : Episode One came out at an odd time for me, as I went to the cinema and saw it on the big screen (as I have with all of the Star Wars movies), but I was under a lot of stress around that time, and started having panic attacks.
I left the stressful situation and haven't suffered since, but part of the recovery process was a break from the emotions I'd had during those times. I could clearly remember things from that time, and remember whether I'd enjoyed them or not, but couldn't actually remember feeling the emotions from those events.
This allowed me to rewatch movies, and reread books and feel them fresh again. So years afterwards I watched the Phantom Menace and remembered that I'd been a bit hesitant in my praise of it, but this time I really enjoyed it. Perhaps because I thought I was going to be a bit disappointed my expectations were lower.
So my opinion is a bit strange for this movie, as I was critical of it when it was released, but I'm now a reborn fan of it and really enjoy it for what it is, and that includes enjoying Jar Jar as a comedy character put in there for the younger kids.

Final Words : The Phantom Menace isn't one of the best Star Wars movies, but it does have some of the most outstanding scenes in any of the movies, being the first where Lightsaber fights became more like an acrobatic dance than the duels there were in the original trilogy.
This movie set the tone for the Prequel era and the Clone Wars series which followed, and deserves some credit for that. But it can prove difficult to watch if can't just disconnect your brain and enjoy the action.