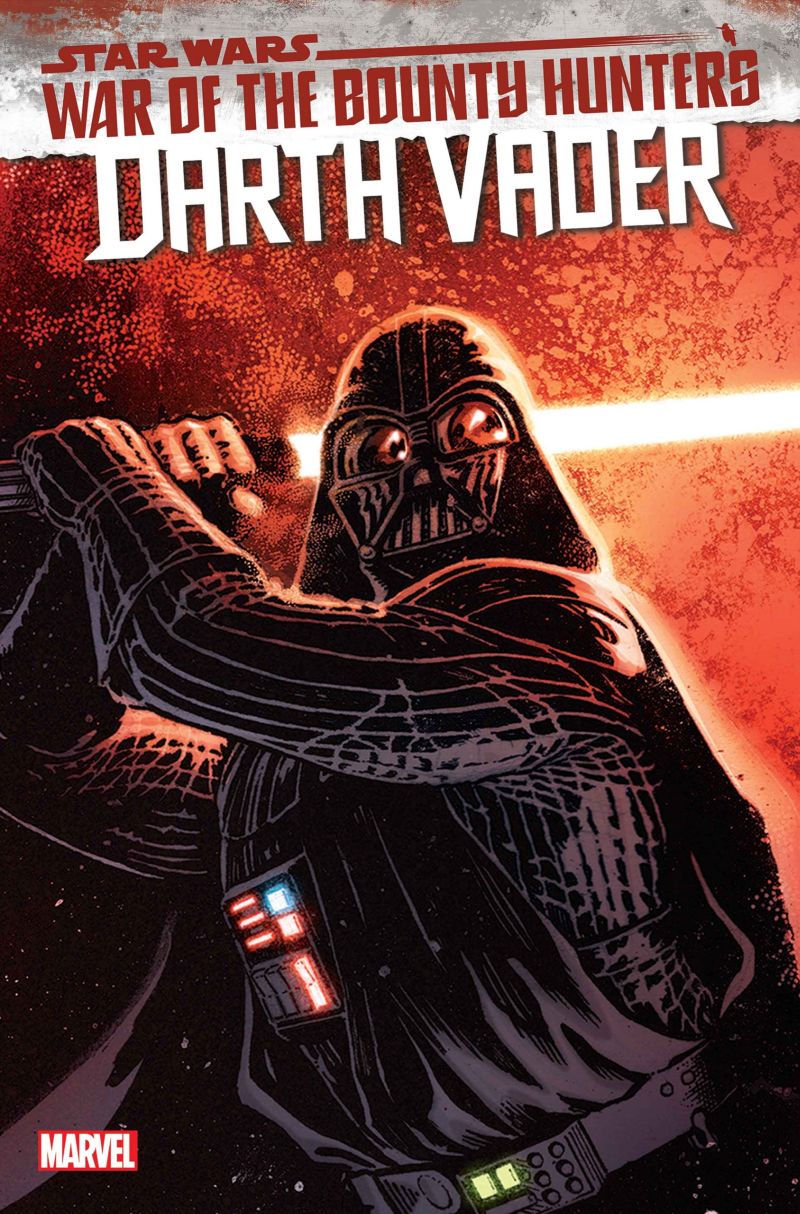 What is it ? : Vader sends a message through the Force to his son, telling him that he yearns for a father figure but without one he clings to his friends, hiding from the Force within him by disappearing into their company. But he tells him, no one can hide from who they really are, and if Luke refuses his offer, he'll cut Han Solo in half as it reveals that Vader is standing next to the carbon frozen body of Han, aboard his Super Star Destroyer while Luke approaches it in his X-Wing.
However Luke turns and flees as Ochi laughs that the boy fears Vader, to which Vader replies, "No, but he will."
As Luke leaves he speaks to Leia over a commlink, telling her that Vader will kill them all if Luke faces Vader, but he can distract him, telling her she's in the clear and to save Han.
He heads past the Crimson Dawn vessel, The Vermillion, aboard which the crew discuss that he's back, and that Ororab wants an X-Wing like that, so they fire grapple hooks to capture his fighter. Luke is ensnared and one of the grapples damages R2-D2, but the grapples are shot off by Darth Vader aboard his Tie Advanced.
Luke attempts to flee once more, but Vader has also damaged the X-Wings stabilisers and the ship plummets towards a planets surface.
Luke manages to land, scrambling out of the damaged ship, only to be followed down by Vader in his Tie Fighter, so he pulls his blaster and opens fire.
Aboard the Vermillion, Bokku is complaining to Ochi that he thought Vader was going to support his bid for Solo, but Ochi tells him that Vader only promised that Bokku would get what he deserved, and he's getting off pretty lightly.
He then turns to Sly Moore, who is speaking to Vader on a commlink.
While Vader is distracted by Moore, Droid Crush pirates attack his Tie Fighter, swarming it and covering its hull.
Ochi attacks Moore calling her a traitor, but as the two fight she tells him she is loyal to the Emperor, as once he was.
Seeing the Droids swarm Vaders Tie Fighter, Luke pulls his lightsaber only to be told by the Droid Crush pirates they've been hired to help him, and he turns round to find a number of them helping R2 repair the X-Wing. They finish and tell him to leave, but when he asks why they're helping him, they tell him they just do what their clients tell them to do, so he should thank the client, The Empire, and Luke flies off.
Ochi and Moore continue to fight, with Moore attempting to break Ochi's faith in Vader, telling him that Vader fears Luke as the Emperor plans to replace him with the boy. That Vader cannot kill her without betraying the Empire, but she has only tested the Empires weakest link and found it lacking. And she plunges her dagger into Ochi's chest, telling him that now he can return to his true master, Palpatine.
Ochi speaks first to Bokku asking him what he's doing as he's spotted his ship in the sky above, but Bokku tells him he doesn't want to spoil the surprise. Then Ochi contacts Vader warning him of Moores betrayal, and is told to kill her, which he tells Vader he's working on, and he warns Vader the Hutts are going after the Imperial transport with Solo aboard.
Vader speaks to Luke through the Force once again, telling him that he sense his anguish, and that he fears for losing his friends and now he's ready to teach him what real fear is. As his Tie Fighter pursues the fleeing Luke. . . .

High Points : I don't even know at this point, the story is jumping around, not even the artists seem to know what's going on. Despite that the art quality is extremely high and it's nice to look at.

I also like that Moore is attempting to break Ochi's faith in Vader, to return him to loyal service of the Emperor, although Palpatine seemed unconcerned with this (and it even seemed to be part of his plan).
We know Ochi's fate (his skeleton is seen in Rise of Skywalker, and his dagger used to locate the Emperors store room where Rey finds a Sith Wayfinder), and he seemingly was loyal to Palpatine at the end, so it's has been on my mind on how he returns to loyal service after his time with Vader.

Low Points : So, lets just start with the obvious, the story is jumping about so much that it loses track of where everybody is. We begin with Luke approaching the Super Star Destroyer where apparently Vader and Solo's carbonite frozen body are. But then we see they're actually aboard the Vermillion, so why was Luke flying around the Destroyer?
Then Ochi is aboard the Vermillion with Solo's frozen body, walks over to Sly Moore and begins fighting, and then later in the the fight is outside on a planet looking up at Bokku's ship flying away?
Vader's ship is swamped by the Droid Crush, as Luke flies away having been repaired by them, then is just behind Luke a page or so later?

I'm also bothered by Moore's faith that Vader cannot kill her because that would be betraying the Empire. Unless this is pure bluff, the relationship between Vader and Palpatine has always been so far beyond Palpatines concerns for anyone else. So I'm personally not convinced that Palpatine would even devote any attention to her death, never mind punish Vader for it. Unless of course he just wanted to.
Especially considering that Palpatine had her demoted to a low ranking administrator only a few issues ago.

So what do you really think ? : While it's possible to wrap yourself in knots to make sense of this issue (Vader was sending from the Vermillion, but Luke thought he was aboard the Destroyer, Ochi and Moore fought while the Vermillion landed on the planets surface, and then off it onto the planet itself (we do see her opening a door which seems to lead outside).). But it doesn't seem worth it, Moore's plan doesn't seem to make a lot of sense, and things are just happening without any particular reason except to keep the reader guessing.

Final Words : I'm going to rate this one the lowest I've rated one of these comics, as it's pretty much trash. The interesting ideas, and massive scope of the early comics is gone, replaced with a vague idea that a bunch of stuff could have happened between Empire Strikes Back and Return of the Jedi as people fought over Hans frozen body.
The entire War of the Bounty Hunters plotline has been so weak in comparison to what went before that it really feels just tacked on, and that this comic series should have ended on Vader's return to Palpatine several issues ago.