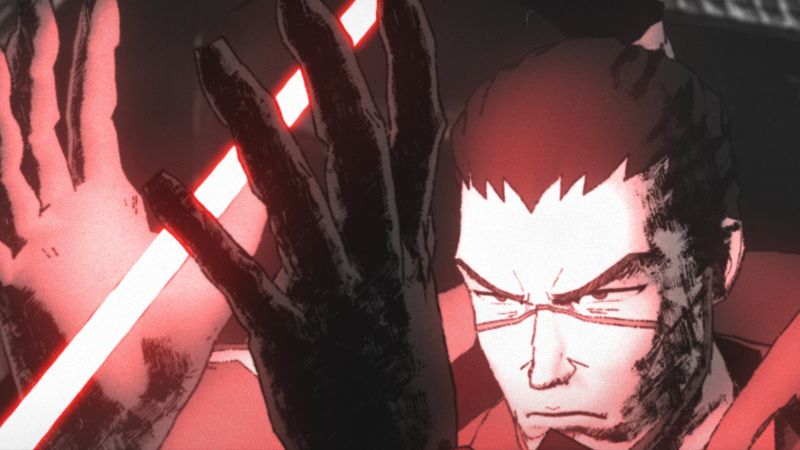 What is it ? : This is the new animated Star Wars series, with all 9 episodes released on the same day. It's Star Wars but independent stories done by Japanese animation studios each in a different style and standing alone.
On a planet with a Japanese style, a Ronin is in town, when an armoured vehicle seemingly pieced together from parts of an AT-AT rumbles into town and a number of raiders dressing in pieces of armour from the Empire and The First Order exit it and begin rounding the townspeople up including their leader who is not much more than a child.
She orders their defenders to act, and a RA-7 droid carrying a gatling laser, and snipers start taking out a number of the raiders. The top of the vehicle opens up and a dark figure elevates out of the inside. She activates a multiple bladed lightsaber staff which rotates allowing her to deflect the hail of incoming laser fire. Using it also to fly like the spinning lightsabers of the Inquisitors, landing next to the droid. The spinning blade cuts through the droids gun, and then through the droid and she makes short work of the defenders.
However some of the deflected laser fire crashes through the wall of where the Ronin is, damaging his Amigasa wearing Astromech droid, which he asks a villager to repair promising to pay when he returns.
He wanders through the carnage of the raid, and confronts the dark woman who asks him who would challenge a Dark Lord, asking him if he is some kind of Jedi, but he pulls a red bladed lightsaber from his scabbard.
The two fight, with the Sith pulling her blade from within the staff, abandoning the umbrella like multiple heads. They end up fighting balanced on a tree trunk floating down a river. As they approach a waterfall, the Ronin activates a button on his wrist and his droid activates, struggling its way out of the house where it was being repair and powered back up by the villager and his Power Droid.
The Astromech makes its way to the raiders, and opens up a mini-missile launcher, with dozens of projectiles striking all of the raiders and taking them out.
The Sith attacks, forcing the Ronin to lose his balance and fall into the water below, but recovering his footing he spots a temple like structure behind the waterfall and conceals himself there.
The Sith follows him down, and spots his lightsaber glowing through the water, so leaps through and attacks, but he has put a lightsaber in the hands of a statue and activates another and strikes her from behind killing her.
As the towns people tidy up from the raid, the Ronin breaks open the Sith's lightsaber and goes to add her Kyber crystal to a collection inside his robe, but instead gives it to the young leader, telling her it will bring them luck, and wanders off with his droid following behind. . .

High Points : It's full of interesting ideas, and for only 13 or so minutes it's action packed and offers a unique look at the Star Wars mythos.

Low Points : However, it's very much an alternate universe version of Star Wars based on feudal Japan, with Jedi and Sith just being Samurai/Ronin, seemingly no Starships, and not existing within the timeline at all.
And this annoys me, as there's nothing in this story which is improved, by not making it canon. With minor changes it could just be on a world after the fall of the First Order, and just be a Japan planet. After all we can get ice planets, forest planets, desert planets, so why not culturally similar to Japan planets. The changes to make it canon would be tiny, it just strikes of laziness to not do that.
I'm also not convinced by the artistic style, and while it grew on me during the 13 minute run time, my initial reaction was to hate it and find it messy.

So what do you really think ? : It's one of the most interesting Star Wars things I've seen in a long time, but it being interesting doesn't make it good.

Final Words : I'm really finding it difficult to say much about this one, maybe because it's only 13 minutes, maybe because it should be seen to make your own mind up about it. I'm giving it a decent mark, because there's a lot of imagination and skill in it, but I'm not raving about it as it does seem a little sloppy on its execution to me. I think that this perhaps wasn't the strongest episode to begin on, but we shall see how the future episodes hold up.