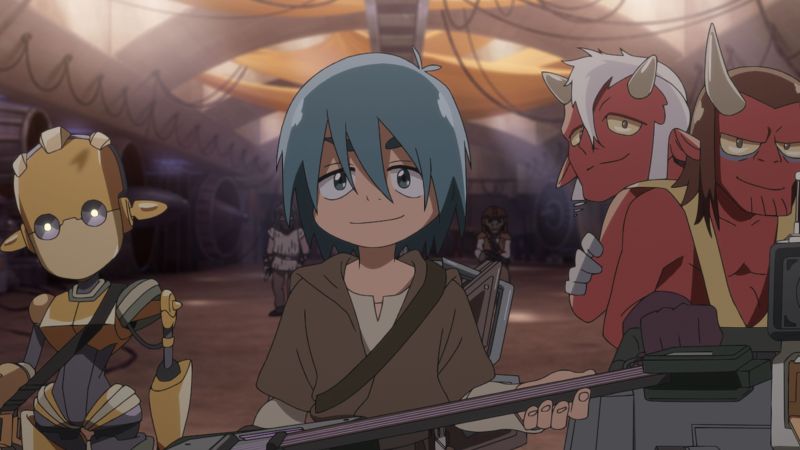 What is it ? : A young Human Jedi Padawan called Jay ends up in a band named "Star Waver" with two Droids called K-344 "Kurti" and V-5, a multi-torsoed alien called Lan and a Hutt called Geezer.
Years later they are playing a concert from the opened cargo bay of their Space Transport, when Boba Fett and some other Bounty Hunters come in looking for Geezer as he has a bounty on his head raised by Jabba the Hutt.
The bandmates fight with Boba and his henchmen, but Boba races towards them using his Jetpack, so they close up the bay doors on their ship and fly off. As they discuss this is the third time this has happened, they notice that Boba is on an intercept course in Slave One.
He shoots them down, and as he boards their ship Jay pulls his lightsaber but it shorts out from lack of maintenance, and Boba takes Geezer away.
Some time later, Geezer is in chains and Jabba's minions come to take him away to execute him, when he sees his bandmates. They have made a deal with Jabba for them all to play one last song before Geezers execution. One of the guards spots Jay's lightsaber, but he reveals he has modified it into a microphone.
They play and the crowds gathered in the Pod Racing stands at Mos Espa love them, so they put to Jabba that they are going to be the best band in the galaxy, and Jabba could be their patron. He agrees, and the band begins to play another song.

High Points : I really like the way they use their ship in this episode, the cargo bay set up with their amplifiers and instruments, so they just open the door which hinges at the bottom becoming their stage and allowing them to perform from the side of the ship.

Low Points : I'm really not one to judge whether they're good or bad, but they really aren't to my taste, and three songs in one 13 minute long episode is way to many.

And the story doesn't really hold together too well either, a band who can slip away from Boba Fett on multiple occasions, and are destined to be the best band in the galaxy, it feels more like Bill & Ted than Star Wars.

Perhaps the worst sin the episode makes though is even for a 13 minute long episode, nothing really happens, because most of the run time is taken up by songs. So Jay just becomes a member of the band, Boba Fett is hunting for them, they somehow reach an agreement with Jabba, but we don't get to see any of these thing actually happen, we're just told about them afterwards.

So what do you really think ? : I knew that Visions was Lucasfilm letting a number of Japanese Anime studios loose to play in their universe in their different styles. And I know that Anime in Japan covers a massive range of subjects and genres, from action to romance to teen music to historical, but I kind of thought that the Anime chosen would be suitable for Star Wars, and a teen music band really doesn't seem to fall into that category for me.

Final Words : I'll give them credit for trying something different with Star Wars. But I'm afraid it's still got to be good, and this really isn't.
But I suppose at least they're trying something new, but I dread to think that if it had been successful we might have ended up with a High School Musical spin of in the Star Wars universe. Death Star Musical anyone?