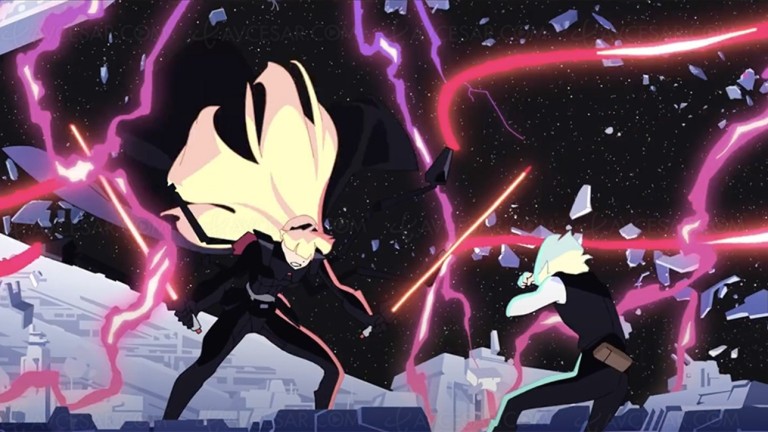 What is it ? : We see a Star Destroyer emerge from the darkness, before realising that it isn't just a normal Imperial Star Destroyer, it's a Gemini Class Star Destroyer consisting of twin hulls conjoined around a super weapon.
A Darth Vader-like figure in black armour walks the corridors, emerging into a bridged area leading to a generator containing a Kyber Crystal.
On the bridge of the vessel, another similar figure, Am, is briefed that the weapon is nearly ready to use by her droid B-2ON, who tells her that he has watch her and her brother Karre grow since they were delivered into their care.
She responds that the journey is only beginning since they were created by the dark side.
B-2ON expresses concern about the prototype armour that she and her brother are wearing, and that it may have harmful effects on their physical bodies, but she is unconcerned and is prepared to sacrifice everything for the Dark Side.
B-2ON reports that the Hyper Cannon is charging, but they realise that one of the Kyber Crystals has been removed and the weapon cannot be used, and only her and her brother have permission to do that. Am looks across from her bridge towards the twin bridge manned by her brother and sees his seat empty.
As Karre moves through the Star Destroyer with the stolen Crystal and his droid R-DUO, he is intercepted by Stormtroopers who attempt to stun him, but he holds the blaster bolts in place and hurls them aside with the Force.
As he reaches a hangar bay, there are more Stormtroopers accompanied by AT-ST's and Am. She demands that he returns the Crystal, but he removes his armour instead and R-DUO boards an X-Wing and opens fire. Am deflects the laser cannon blasts, but they destroy the scout walker and in the chaos Karre boards the X-Wing and flees.
As they fly away from the Star Destroyer they find that the X-Wing is held in place, R-DUO thinks it's by a tractor beam, but Karre realises it's Am using the force. As the X-Wing struggles to leave, Karre realises that Am isn't pulling the X-Wing, but the Kyber Crystal so he grabs it and it and he are dragged out onto the hull of the Star Destroyer.
As the twins struggle using the force to grab the crystal, it cracks and each ends up with a fragment of it. Am places hers into her Armour, powering it up creating multiple arms each with it's own Lightsaber whip which attacks Karre.
As they fight, Karre explains that he is doing all of this because he had a vision of his sister dying and he would do anything to avoid that. Am repeats she is willing to sacrifice anything for the Dark Side as Karre hides behind a Turbolaser turret, and then flees onto the nose of his X-Wing now piloted by R-DUO.
He places his shard of the Kyber Crystal into his lightsaber, and him and R-DUO come up with a plan, that with his now enhanced lightsaber, and the X-Wing's hyperdrive, they could destroy Am's armour, but Karre considers it too dangerous, but has the choice taken away as R-DUO is piloting the fighter.
He therefore ignites his lightsaber, which emits a superlaser enhanced blade, and as the fighter races forwards, his blade cuts the hull of the Star Destroyer before hitting Am and cutting the armour off her.
The X-Wing goes to Hyperspace and the hull of the Star Destroyer is cut completely in half, much as the Supremacy was in The Last Jedi.
Later, Karre is sitting atop his crashed X-Wing on a desert world under Twin Suns, and he tells R-DUO that he will find his sister and save her as the suns set . . . .

High Points : I'm not sure if it's supposed to be funny, but I found elements of this episode to be hilarious, it's so filled with clichÃƒÂ©s and just plain silly moments.
My favourite moment is definitely when Karre comes up with a plan, but then decides that it's too dangerous, only to have his Astromech take the option away by just going ahead and doing it anyway.

Low Points : The episode generally doesn't make any sense, why is there X-Wings and Y-Wings aboard a Star Destroyer? It just seems to be a mashup of Star Wars stuff without any sense or reason.

At the beginning of the episode, we get Exposition bot 9000, with B-2ON just repeated telling Am things she knows, just so we the watchers can find out. He reads out paragraph after paragraph of information about the Twins birth, about the super weapon, etc, etc, really clumsily done way of getting us up to date. A Star Wars scroll would have been a far better way of dumping all of this info at the start.

The superlaser Lightsaber that Karre uses after putting the Kyber Crystal into his saber, is plain silly, where he has a giant long blade capable of cutting a Star Destroyer in half.

So what do you really think ? : There's some great ideas in here, with the Twin's concept repeatedly coming up, with the Gemini Star Destroyer, the twin suns of (presumably) Tatooine at the end, etc. Which could have worked so well if developed a bit more.
And although I liked a bunch of the ideas in this episode, finding them intreguing, I found myself disliking this episode even more than the last (Tatooine Rhapsody), as it seems to be an almost parody of itself, with extremely cliched storytelling and loads of exposition.

Final Words : I found myself wondering if the Twins in the episode were supposed to be clones of Luke and Leia, as Karre does resemble Luke (although Am is blonde so doesn't resemble Leia). Given the time period seems to be after the fall of The First Order, it does seem to be an interesting idea that the cloning technology left behind from Snoke and Palpatine might get used by Dark Side practitioners on Exegol, and for them to clone and turn to the Dark Side the twins which had caused the Empire so many problems.
But even despite the training, Luke's inherent goodness bleeds through and makes him work against them. Seems to be an interesting idea, but an undeveloped one like so many in this episode.
Or maybe it's just my imagination seeing things which aren't there.