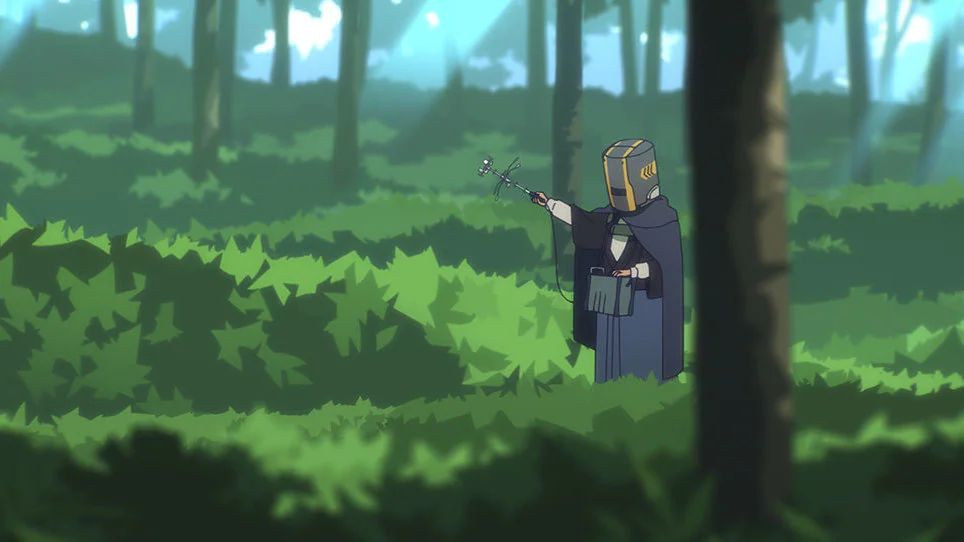 What is it ? : On a forested planet, an helmeted explorer and a masked Jedi, who is hiding from the purges after Order 66 are scanning the area, the Explorer, Valco, explains to the Jedi, F, that the Empire will not find her here.
Valco tells F that he has something to show her, and they watch a couple passing through the forest, the couple are just getting married, and the husband, Asu, is carrying his wife, Haru on his back, telling her that a bride should not get dirty feet. They head up a mountain to a cave, where they stand on a wooden platform and summon "The Magina", a local term for the Force, witnessing scenes from their youth and the harmony of their planet. meanwhile F has a flashback to losing her master during the Clone Wars.
Later, Valco and F are attending the feast for Asu and Haru's wedding, the villagers share with the strangers, and Valco explains to F that here weddings are shared with everyone here and to hold back would bring a curse on their marriage. He also explains to her that the world was stripped by the Separatists during the Clone Wars, and that when they left, raiders claimed the Battle Droids which were abandoned and plague the village even now. F comments that this was all for war, and Valco tells her War is loss.
The villagers have nothing left to give the raiders, so are giving up the bride who sacrifices her life and happiness to keep them safe.
Later that night, F is meditating on the Force, and levitates a stone. She is spotted by Haru who asks if she can feel the Magina as well? And explains that while she could fight the raiders, there would be casualties, whereas this way she can save all of her people.
Haru returns to her husband, and finds Asu fingering a knife, she tells him to put it aside as they are in this together, which he does and she smiles.
The next morning a starship arrives, and a Umbaran raider along with Abyssin and Twi'lek associates, Haru and Asu approach the ship surrendering to the Umbaran, Izuma, but he has Battle Droids search the area to ensure there is no resistance and they find another villager clutching a Thermal Detonator, and Izuma is ready to put her to death. He fires, but the Blaster bolt freezes in the air, and F hurls it back at Izuma.
From a high rock above, Valco opens fire on the Battle droids with a sniper rifle, until he runs out of ammo and throws his helmet down, which then fires rockets shooting up the ramp of their starship where it explodes destroying the vessel and cutting the remaining Battle droids off, shutting them down.
Izuma grabs Haru to use as a shield, asking F is she is a monster, but she responds that she is a Jedi, before igniting her yellow lightsaber and kills him before he can harm Haru.
Later, F leaves in her starfighter, a Z-95 Headhunter, leaving Valco with the villagers in peace as she jumps to Hyperspace. . . .

High Points : This episode is on the verge of brilliance, with F the Jedi being taught a lesson on sacrifice while she is still suffering from losses through Order 66. The idea that a broken Jedi, bitter about her loss, should learn about the beauty of sacrifice and come to terms with that loss is great. But the episode instead turns this into the Jedi has stopped helping people because of her loss, and she learns to care once more, which personally is a weaker story.

I also have to complement the music, which is absolutely beautiful, complementing the scenes of nature wonderfully and making me want to watch hours more of this section of the episode and just relax.

Low Points : Something which is so close to being a beautiful episode about loss and learning to deal with it just ends in an action scene which is done pretty well, but is just so predictable.
I also find myself wondering why Valco's helmet is wired up with rockets and to explode, as it seems to be a trick he can only use once, and wearing an explosive helmet seems a little dangerous.

So what do you really think ? : This episode reminded me somewhat of Crouching Tiger, Hidden Dragon, being about the sacrifices people make for their cultures and people, and about lost love. Perhaps that reminder made me want for this episode to be so much better. With amazing soaring music, grand scenery, young love and a hero who is grieving, it had all the pieces to be something special but took advantage of nearly none of them to just make it about a Jedi saving the day.

Final Words : Although the first episode of Visions was enjoyable by turning things up to 11 and showing us things we've never seen before, this could have been a gorgeous study of loss, a quiet but lovely episode, which sadly just becomes something far more mundane.