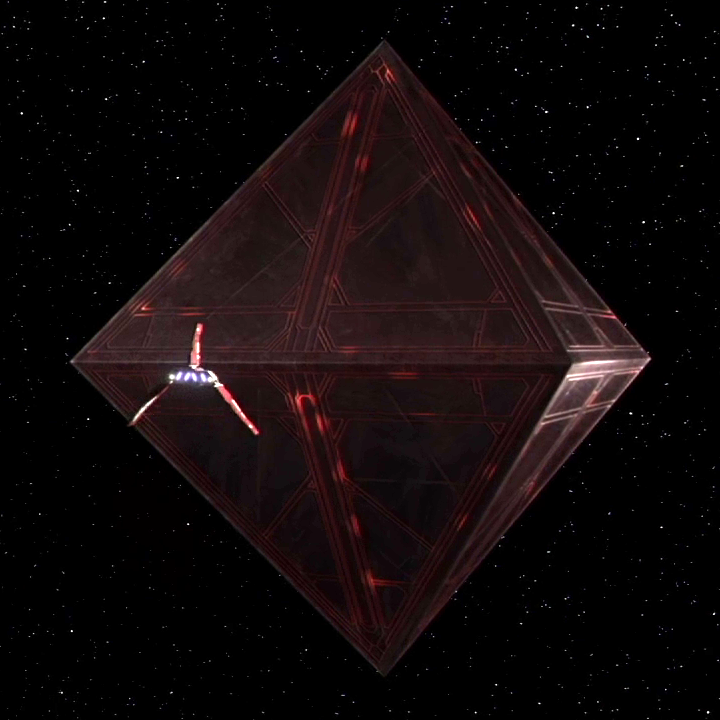 What is it ? : The Jedi have received a message containing a code not used for 2,000 years, and send Anakin, Obi-Wan and Ahsoka to rendezvous with a Republic Cruiser and investigate. Arriving at the rendezvous, they contact the Cruiser only to discover that they are at the same coordinates but neither can see each other.
Their transports power fails and they are drawn into a massive floating structure and fall unconscious. When they awaken they discover they are in a terrestrial environment with plants and mountains, but no animals, they also detect that the place is powerful with the force. Exploring they encounter a glowing female who asks them to follow her, before a rockfall separates Anakin and the female, from Ahsoka and Obi-Wan.
Obi-Wan and Ahsoka head back to their ship but it is missing and as a storm begins, they meet a male with red glowing eyes, who asks Obi-Wan if Anakin really is the chosen one, before disabling their lightsabers with a gesture, and finally warns them the storm is dangerous and turns into a giant bat-like creature and flying away. Obi-Wan and Ahsoka take cover from the storm in a nearby cave.
Meanwhile Anakin has travelled to a monastery, and encounters an older bearded man, who tells Anakin he is to be tested to find out whether he can fulfil his destiny, and offers him somewhere to stay for the night.
Obi-Wan is visited by Qui-Gon Jinn's force ghost, who asks after Anakin and warns Obi-Wan that the people here may corrupt Anakin if he cannot achieve balance in the force.
Anakin is visited by his mother Shmi Skywalker, and she warns his he is torn by guilt over her death and his secret marriage, but when he confronts her she changes into a monster and departs.
Ahsoka is visited by her future self, (who looks nothing like Ahsoka from Rebels) who warns her to distance herself from Anakin as the Dark Side within him will lead to her own corruption.
Anakin confronts his host, who tells them that this place is both Prison and Sanctuary, as the two others here are his children and they would tear the universe apart if allowed to leave. Anakin as the Chosen One could replace him and keep them here if he passes a test, or he and his friends could leave, either way the test must be taken.
Anakin is confronted by the two children, who have taken Ahsoka and Obi-Wan captive, and they force him to choose which one to save, however the force amplifying powers here allow him to defeat both and force them to release their captives. The father says he has passed the test and could provide balance between the children if he remains, or he and the galaxy will be haunted with his selfishness if he leaves. Anakin chooses to leave, although he is hesitant to do so ... and the Imperial March plays as his ship leaves the planet.


High Points : A very good episode from beginning to end, the story has enough mystery to keep you interested while avoiding being too enigmatic. Two elements particularly were of note to me.

Qui-Gon Jinn, Liam Neeson returns to Star Wars to voice the force ghost of Qui Gon, and is absolutely amazing as always. More than that though, in the brief few moments he is on screen the character is perfectly portrayed. Asking after Anakin, offering Obi-Wan advice, the characterisation is perfect, and really feels as if Qui Gon has returned, far more so than Shmi Skywalkers return a few moments later. Perhaps because we're aware that Qui-Gon has become one with the force and has been waiting to come back, or perhaps he's just a better written character than Shmi, I'm not sure.

The Chosen One, the force wielders on this planet are aware of Anakins destiny as the Chosen one, and it makes me wonder if this is actually his destiny. To bring balance between the sister and brother, that what he does later in destroying the Jedi Order isn't actually what is intended, although it could be seen as returning balance to the force (reducing the number of Jedi to the same as the number of Sith). It's an interesting concept, and a fairly well explored concept of people drawing their own meanings into vaguely written prophecies.

Low Points : I mentioned above that the return of Shmi Skywalker as a spirit wasn't done as well as Qui-Gon's. The character doesn't seem worried about her son, and seems to have different motivations than we saw in Episode One. She also then changes into a monster. So was this Shmi at all? It's not explained, and leaves this scene confusing, as who was it if it wasn't her. All three of the heroes are visited by spirits, so if Anakins was fake, were they all fake? Which seems odd given that the others seem to offer good advice.

So what do you really think ? : Loved this one, and I see that the storyline continues for the next two episodes, which given the heroes are leaving at the end of this one seems a little odd, and I hope they don't ruin things in this tightly scripted and well done episode by dragging on the story for too long.

Final Words : This season has really taken off lately. It really seems with Clone Wars that they manage to get things right in the second half of the season before fumbling the ball right at the end.