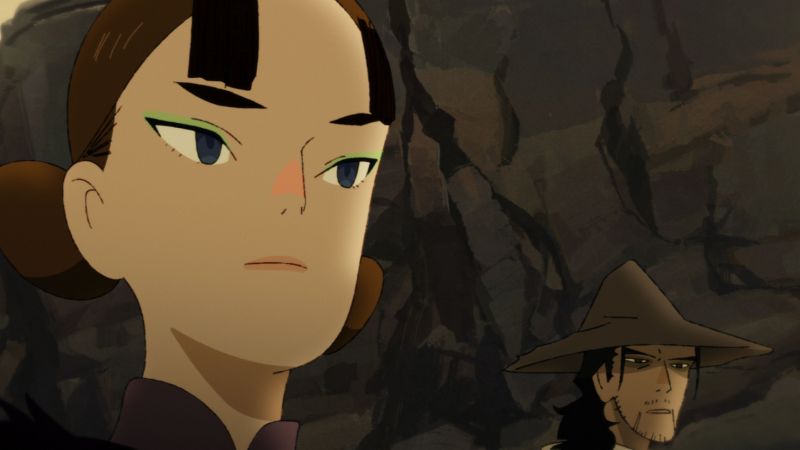 What is it ? : A damaged B-Wing Starfighter crashed down onto a planet, and masked raiders on horselike creatures swarm towards the crash site. The pilot stands against them, fighting them off with his lightsaber, but suddenly he is hit with a painful vision and he collapses, allowing the raiders to beat his defenceless body. However they are driven away by a hail of arrows.
The Jedi, Tsubaki, later awakens laying next to a camp fire, discovering he has been rescued by three people, Princess Misa and her guides Kamahachi and Senshu. Tsubaki has come here at Misa's request as the royal palace has been taken over by a Sith within the Royal Family and she has been exiled.
They travel together towards the palace, and we get a montage of them riding through forests, and over mountains, however they arrive at a village and realise they are surrounded and the only way forward is over the mountains, but Kamahachi and Senshu. are hesitant as the mountains are sacred to the gods, but Misa pays them 500 credits, and they agree.
As they head over the mountains there is driving rain, and they realise they have lost Kamahachi, and Senshu advises against looking for him, as it was his destiny to die. Tsubaki disagrees, and while the other two continue, he turns back to look for their lost comrade. That night in a village where Royal soldiers are celebrating and terrifying the villagers, Tsubaki and Kamahachi catch up with the others, and Misa pays the two guides off and Tsubaki suffers another of his disabling visions leading to the others wondering if he is okay, which he assures them he is.
The following day, Misa and Tsubaki distract the guards with burning bales of hay, and we get a flashback to the pair when they were younger, and we see their relationship is closer and more tender than we have previously seen. Inside the palace they are confronted by Masaki, Misa's aunt and the sister of the king and usurper of the throne, who has red eyes and a lightsaber. Misa fires arrows at Masaki who easily deflects them, and Tsubaki ignites his own lightsaber to fight the Sith, giving her the offer to leave the planet and never return.
As they fight Tsubaki suffers another of his disabling visions, wracked with pain it allows Masaki's forces to grab Misa and take her away, while Misaki mocks Tsubaki for his weakness telling him he is untrained, and if he turned to the Dark Side she could awaken the true power within him, revealing the bruised and bound forms of Kamahachi and Senshu.
We get a flashback to Tsubaki telling his master he has to return, and the master disagrees telling him that someone else should go as it clouds Tsubaki's judgement, warning him that he cannot interfere as it is Tsubaki's destiny.
As Tsubaki struggles to recover from the visions, he is attacked by several of Masaki's masked guards, only for him to discover that one is Misa who has been forced to wear the mask. Masaki tells her that he has killed Misa, and only together can they heal her, and only if he agrees to be her apprentice and together they can bring order to the galaxy and protect their planet and Misa as well.
Tsubaki submits, and they do indeed heal Misa, and as Masaki walks off and to Misa's horrified gaze, Tsubaki pulls up his hood and follows his new master and they depart on a starship. . . .

High Points : I'm reaching for praise for this one, and I suppose it does attempt to bring us an epic planet crossing tale, and the artwork at times is quite lovely as they travel through forests and heavy downpours of rain. But for all of it's aims it fails in almost every way.

Low Points : To a degree this episode attempts to do an epic Lord of the Rings type quest across the planet to bring Tsubaki and Misa to the palace to confront the usurper Masaki, with them struggling through storms, over mountains and through picturesque forests. However this lasts around 2 minutes total run time, giving us only a montage of this journey.
The episode also attempts to show a Jedi whose love leads him to yield to the Dark Side, in a similar fashion to Anakin. Giving in to the darkness to save the one he loves, but again we only see any real relationship between Tsubaki and Misa in a flashback just as her life is endangered.
And Tsubaki never really seems to get turned to the Dark Side, merely yielding to it and stopping fighting it, and while an argument can be made that not fighting evil is evil in itself, he just comes across as weak rather than turned.

So what do you really think ? : This episode feels more like the pre-titles segment shown before you get to the story, it's so brief and without any context as we're only shown the story beats which matter rather than any real world and story building.

Final Words : So Visions ends with a whimper, as Akakiri is one of the weakest stories.

Lop & Ocho was definitely the high point for me, and there were interesting ideas in a few of the others, with The Ninth Jedi being filled with some fascinating concepts, The Village Bride building an intriguing and beautiful world and The Elder having a decent story accompanied with some amazing visuals. But much of the rest of the series really wasn't good, not to say that it didn't try, but it just failed to be Star Wars, or just failed to tell a decent story.
Would I watch another season? Yes definitely, these were at least trying something different, and while many were not to my taste, I am glad they exist and that Disney allowed someone else to play with their toys and see what they could create.