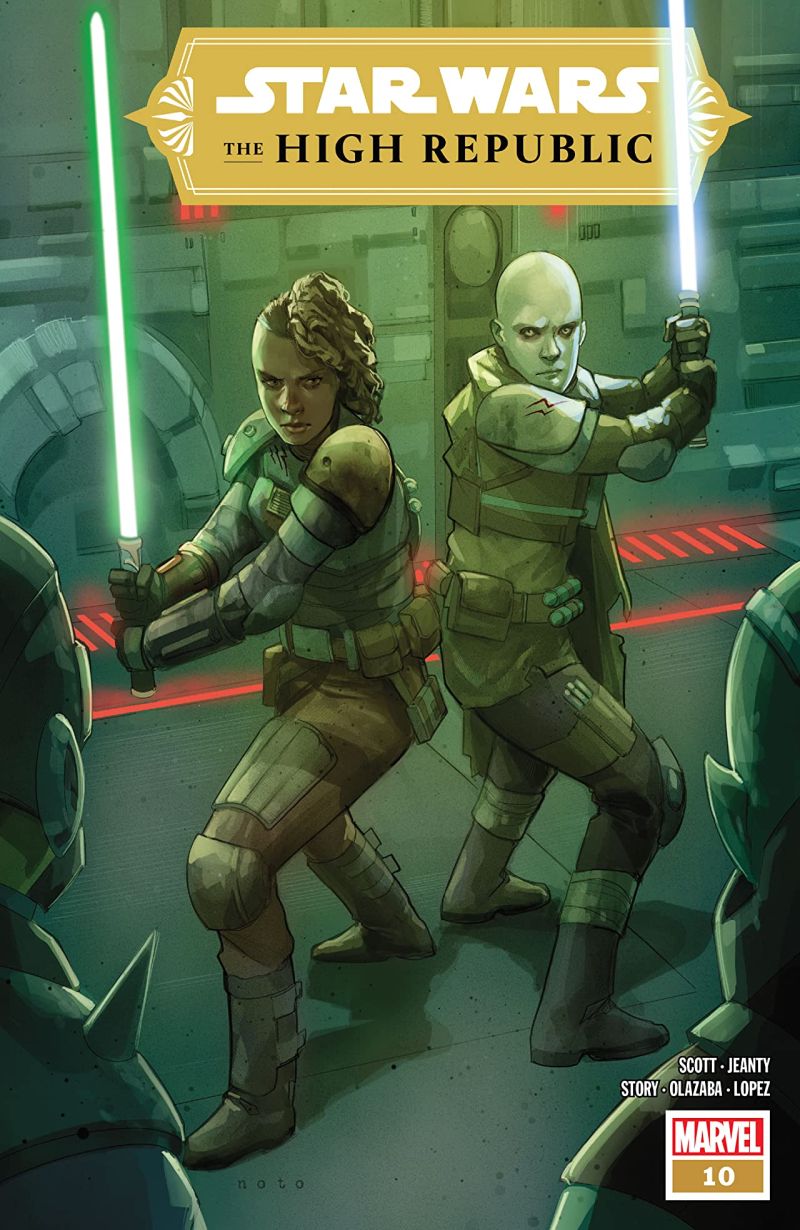 What is it ? : The two Jedi, Keeve Trennis and bonded pair twin Terec have been sent undercover to the Nihil foundry on Xais, where the Tempest Runner Zeetar has ordered them to kill their former ally Myarga the Hutt.
Keeve causes an accident using the force, and then explains the tactical knowledge that Myarga might have, since he worked alongside the Jedi, and that they should interrogate him.
Zeetar reluctantly agrees, but Myarga is placed inside a gas chamber where he is exposed to raw Nagnol gas, which is toxic to Hutts, and then shocked until he reveals that the Nihil have enemies right in front of them, Keeve and Terec.
Meanwhile aboard the Jedi Star Cruiser Ataraxia, Ceret is using his bond to Terec to track Keeve and Terec to the Nihil foundry, when Jedi Master Sskeer receives a communication from Jedi Doctor Gino'le who reveals he has found the reason why Sskeer is losing his connection to The Force.
Terec and Keeve ignite their lightsabers and call on the Nihil to surrender, but Zeetar finds this amusing, and calls in reinforcements in the form of a masked figure which reveals itself to be Lourna Dee, who Keeve believed was dead, who shoots and presumably kills Myarga.
Keeve tells her that she has just made a mistake as he had been using the Force to keep Myarga alive against the toxic Nagnol and can now concentrate his powers on her, but she laughs and has a box brought out which causes Keeve and Terec to lose their connection to the Force and stagger weakened.
On the Ataraxia, Ceret senses that his bond to Terec has been lost and as he struggles to reconnect his skin becomes grey and cracked as he tells the other Jedi "There is only pain." . . . .

High Points : I'm struggling to find good things to say about this issue, although that said it is skilfully illustrated and written, but there's nothing much which happens in this issue.
In fact we end the issue still within the same scene as we began it in, yes the Jedi have been revealed, but that's it.

Low Points : But that's only part of the problem with it, we don't move the story forwards by much, so it's a little boring, but also the characters are behaving in a fairly dumb way. Since when did they think sending a couple of fairly fresh and innocent Jedi to be undercover with the Nihil who love killing and torturing, would be a good idea.
It was obvious from the start that they wouldn't be able to maintain their cover for long, and basically are still standing with the people who met them when they disembarked their ship and their cover has failed.
Also the revelation that the masked figure was Lourna Dee was kind of lost on me. While I can see from her Wookieepedia page that she has been featured in a half dozen or so High Republic stories all ready, and has a backstory far more developed and full than many of the characters we've been following in this comic since the beginning.
But since I haven't read any of those, I'm only aware that last issue they said she was dead, and she's a Tempest Runner, one of only three in the Nihil forces. But then again so is Zeetar, so why is it any more important that they're facing her instead of just facing Zeetar.

So what do you really think ? : I didn't hate this issue, but it's really obvious what's going to happen, and the big reveal just kind of dropped with a massive "who?" from me. But given the material and story they've been given to work with, the dialogue is decent and the artwork is very nice.

Final Words : The interesting features that The High Republic started with have all but been lost, and this could be any era and any Jedi at this moment. The story wouldn't be radically different if you swapped the Nihil for some pirate group, and Keeve and Terec for Anakin and Obi-Wan in the Clone Wars era.
Which is a little sad, as they were managing to do something a bit different.