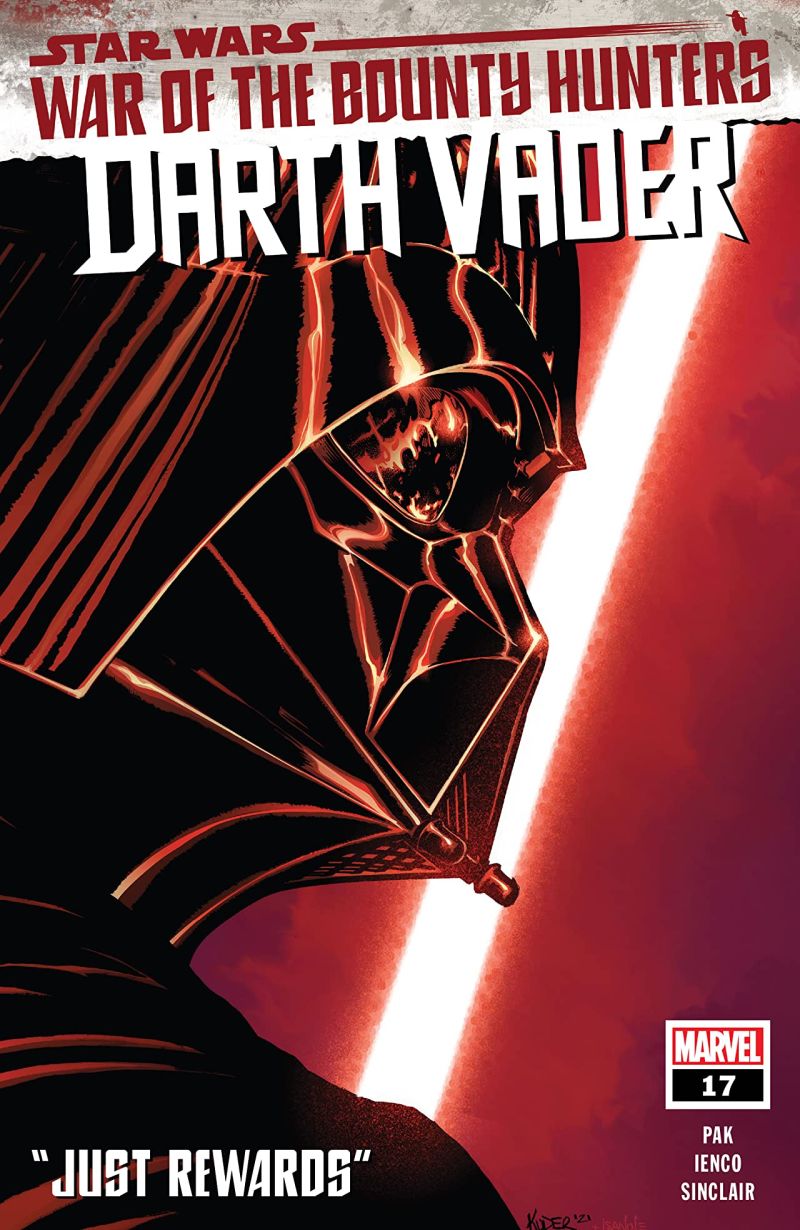 What is it ? : Ochi continues his fight with Sly Moore, and she warns him that Solo is being stolen by the Hutts and Vader should stop them. Although Ochi correctly points out that Vader only wanted Solo as bait for Luke Skywalker, who he is currently in pursuit of, so therefore has no need for Solo.
But Admiral Piett on the Executor contacts Vader, telling him that the Emperor himself has ordered them to cease their activities against the Hutts, and that Vader is to deal with it personally.
Although unhappy with the situation, Vader complies, at least satisfied that he has show fear to Luke, and that he will measure Palpatines and lands on the Hutt flagship. He carves his way through the thugs sent against him, and Bokku accuses Vader of humiliating him. Vader replies that he knew Bokku was going to betray him far earlier, and was always going to end up killing him.
As they end up face to face, Bokku reveals that he is a member of Crimson Dawn, and Vader tells him that he has chosen foolishly, but Bokku points out that Vader already said that he was going to kill him anyway, and that in a galaxy of of Emperors and Wizards, there is only one way for lowly souls like him to win the game, to stand together.
Vader slashes him across the chest, and he orders his droid to self destruct the ship, and we see a massive explosion in space near the Executor.
On the planet below, the wreckage falls, including a sphere of compacted hull plates and superstructure crushed into a ball, which Vader cuts himself free of.
On the Executor Ochi has Sly Moore in manacles, which surprises Mas Almeda when he arrives, and Ochi explains she was conspiring to let Skywalker escape. She defends herself by saying that Palpatine wanted the boy alive, and Vader was going to kill him. Almeda asks what of the Rebels, and what of Crimson Dawn, but Vader enters and asks why he is not asking about him.
Ochi is pleased to see Vader, but when Moore tells Almeda that Qira and Crimson Dawn escaped on the Vermillion, he tells Vader that he lost both the fish and the bait.
Vader responds that Skywalker fled in fear, that he is not who the Emperor thought, but Moore tells him that he still has his freedom and he still fights. But Vader force chokes her, telling her Luke has hope, but hope is not enough.
A hologram of Palpatine appears, congratulation Vader for being truly with them again, and Vader kneels dropping Moore as The Emperor explains that Crimson Dawn must have agents at all levels throughout the Empire, and he instructs Vader to find these infiltrators and show them who is stronger.
Vader enters the Hangar bay where General Romodi stands at the front of a Stormtrooper army, reporting that they have been ordered to help Vader to destroy Crimson Dawn, visible in space are a formation of Star Destroyers.
Ochi asks what the plan is, and Vader tells him to go to the Assassins league and tell them they now serve him.
Later on the world of Saki, three Master Assassins meet with Ochi, they are worried that the Empire is about to turn its gaze onto the shadows where they operate, but Ochi explains that as long as they're not Crimson Dawn, they've nothing to be worried about. Which they explain they've heard, and have a gift to ensure they're all good with Vader.
They enter a building where Qira is restrained inside an energy cage, and Ochi is impressed they've managed to capture the leader of Crimson Dawn, which they boast that it wasn't easy. but they are the best.
Ochi asks them if anyone else knows about her, and they say that it's only them, so only they should reap the rewards. To which Ochi agrees and guns them down, releasing Qira from the cage, repeating Crimson Dawns mantra "A million stronger than one", which she echoes back. . .

High Points : There's a lot of talk in this one, as the story closes off War of the Bounty Hunters and moves into the next volume, Crimson Reign. But there are a couple of good moments, the ending, where Ochi seemingly reveals he has been working for Crimson Dawn all along (more on that later). And one of those Vader moments of totally over the top power where the Hutts blow up their flagship around Vader, but he just uses the force to create a protective shell around himself from the Wreckage and falls to earth on the planet below. A moment which made me laugh out loud, as it's just so Vader, the same Vader that rode a Sumna-Verminoth into combat against Palpatine a few issues ago (only for Palpatine to force choke the immense creature).

Also worthy of mention is Bokku's final speech, that in a galaxy of Emperors and Wizards, the only chance for normal people is to stand together. It turns out that Crimson Dawn has become a galactic trade union, but I really like the concept that normal people are annoyed by being dominated by space wizards.

Low Points : But there's too much exposition, wrapping up all the storyline so we can move onto the next phase, of Vader vs Crimson Dawn. And that ending I do not believe, Ochi is known to die in his search for Luke on Pasaana, and he hunted down and kills Palpatines son and daughter-in-law on Jakku, so is unlikely to turn against Vader in this comic series and survive to do those things, so it's likely that under Vaders instruction he's inflitrating the infiltrators, which is cool, but makes the apparent betrayal here fail to work.

Oh, and I am not impressed with the cover at all, the reflections in Vaders shiny helmet in Red just don't work for me, it makes for a more dramatic image if you take the colour out of Vader, and have him in Black and White against the red lightsaber and background to make him really stand out. But having it all in red just looks like an ink saving measure to me.

So what do you really think ? : Not the best of the Vader comic, but I've not liked the War of the Bounty Hunters section, perhaps because I'm only seeing part of the story (since I'm not reading all of the other comics taking part in this crossover), but I think because it doesn't make much sense as we already know the fate of Solo, and creating a massive side quest which happens while he's on his way to Jabbas palace loses all of its drama when we know exactly how it's going to end up.
However, we don't know the fate of Crimson Dawn and Qira after the death of Darth Maul, so we're really in uncharted territory, and we can have some really interesting stories here, so I'm looking forwards to what happens next.

Final Words : So we lose Bokku the Hutt, the most buff looking Hutt we've ever seen, and he's a sad loss as I'd have loved him to continue betraying Vader, only to discover that's what Vader was relying on him to do. He looked funny, his betrayals were funny, he'll be sadly missed, lets have a moments silence for that most ridiculous of Hutts, Bokku.