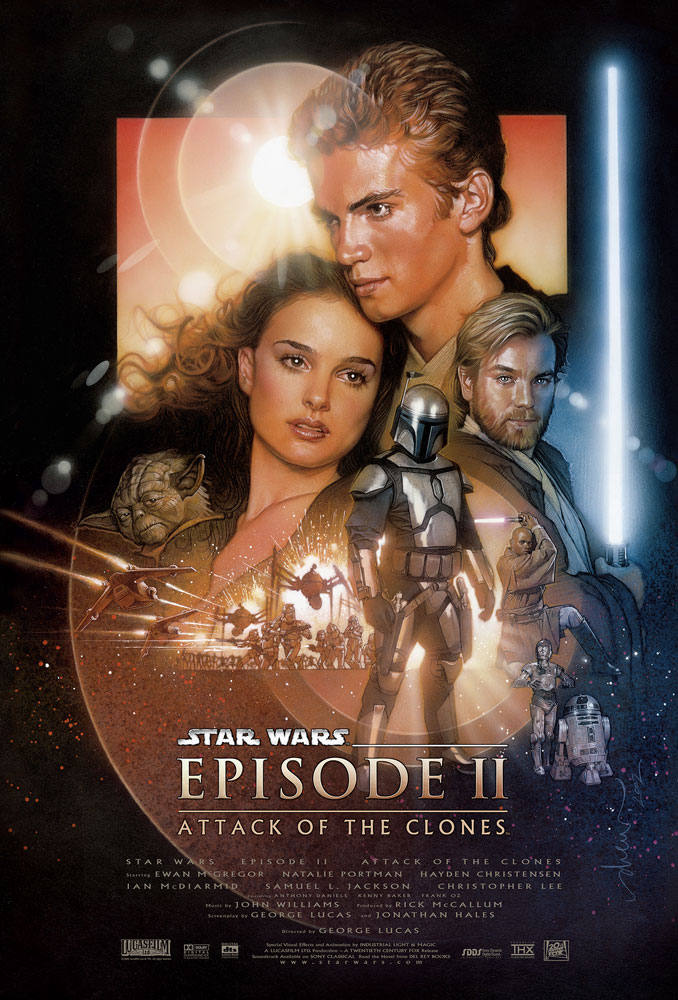 High Points : Well its a massive spectacle, with Coruscant being fast moving and full of life like we've not seen a sci-fi city before, and the Clone War itself being huge in scale with thousands of combatants in action. But the special effects haven't aged particularly well, and it looks a little like a video game cut scene now, but you can't be too harsh on what age has done to a movie.
On rewatching I realised the brilliance of Palpatines plan. He has Padmes life threatened, knowing that Anakin and Obi-Wan will investigate more carefully as she is a friend. The assassin uses a droid to plant the venomous insects, but lets it wait so they can follow it back to her, and then she is killed by a traceable dart instead of a blaster, so they can follow the clues and discover the Clone Army.
Jango then flees to Geonosis on purpose, so Obi-Wan can find the droid army which will give cause for the Republic to use the Clone Army and start the war, which will give the Republic reason to give Palpatine unlimited powers. It's all a trail for the heroes to follow, and they do, all perfect little puppets for Palpatine.
On previous watchings, I mistook this for bad writing, and that it was all just too convenient, but now I realise that's the idea not a mistake.

Low Points : But despite that, the movie is still riddled with problems, and within the first 5 minutes of my rewatch I'd began to regret not keeping a notepad on hand to remember everything I was noticing. Not even the scrolling text had ended when I was questioning why the Republic was voting to create an army because "Several thousand solar systems have declared their intentions to leave the Republic.", they've not actually left yet, they've not actually declared war, they've just declared their intention to leave, and the Republic has therefore decided, lets make an army.
Definitely made me realise the Republic isn't the good guys here.
But I'm not going to go over every problem I saw, such as Obi-Wan contacting the Jedi from Geonosis, he is out of range so searches for Anakin's signal, which he finds on Tatooine. But it's Amidala's ship he contacts instead? A ship that he has no way of knowing they're aboard, since the last time he knew, they left aboard public transport, and they only got the ship later on Naboo. But perhaps Anakin registers his comlink on every ship he boards, and Obi-Wan knew that!
At the very beginning, the movie tries to fool us that Padme has been killed in the starship explosion, because we see a figure from behind on the ship, who gets addressed as Senator, and the scroll text told us that Padme was now a senator and was returning to Coruscant. This is just a fake out, since she is pretending to be one of the Starfighter pilots. But this raises the question, as to why the crew of the ship is addressing her double as Senator, when its really obvious to them that it's not the same person?
But I said I wouldn't go over every fault I spotted, or this would be the longest review ever.

So what do you really think ? : So lets leave it at I still don't like this movie, even if I do now have the slightest glimmer of respect for it. The terrible dialogue "I don't like sand", the way Padme falls for Anakin after he admits "I killed them. I killed them all. They're dead, every single one of them. And not just the men, but the women and the children, too. They're like animals, and I slaughtered them like animals.", so she decides that he's marrying material. It's just not a good movie at all.