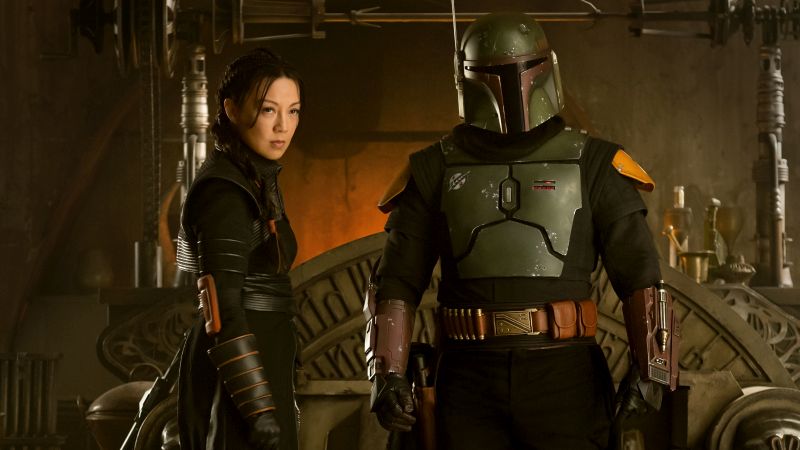 Chapter 1: Stranger in a Strange Land

What is it ? : The camera moves through Jabbas Palace showing it deserted and empty, eventually showing us a coffin like bacta tank inside which is Boba Fett. We get flash backs to Kamino and Geonosis before showing us Jabbas wrecked sail barge at the Pit of Carkoon, inside of the Sarlaac Boba struggles as the creature digests him slowly.
He activates his helmet scope, and spots a Stormtrooper nearby and connects his air supply, before tearing through some of the Sarlaacs tissue and using his flamethrower, and crawling his way out of the sand and collapsing.
Jawas arrive to scavenge and strip his armour and backpack from him, before his body is found by Sand People who drag him behind their Bantha back to their clan. He awakens to find himself strapped to a stake next to another prisoner, a Rodian, and they are left there until night fall when Boba begins sawing the ropes binding him against the stake. His activity is noticed by a Massiff left on guard duty, but he disables it after freeing himself. He asks the Rodian if he wants him to free him as well, but the Rodian alerts the guards and Boba flees into the Darkness. He is caught by the Sand People and they allow him to duel one of them, watching as the weakened man is beaten in unconsciousness.
Back in the present Boba is awakened from the Bacta tank by Fennec Shand who tells him there are guests here to pay their respects. Boba is dressed in his armour by droids and takes his seat in the throne room where the guests are introduced one by one by a droid, UK2-B. The last of the guests is a majordomo of the mayor of Mos Espa, and the fact that the mayor has not come shows some disrespect. Further disrespect is shown by the fact that the majordomo comes without tribute except the mayors best wishes and requests tribute on behalf of the mayor, which Fennec tells him is given in the form of allowing him to leave alive. The majordomo warns that the mayor will no doubt send another delegation in the future.
Next two Gamorreans are brought before Fett, they were guards to Jabba and Fortuna, but refused to surrender even after their boss was killed, and Boba asks then for the same loyalty, and they bend the knee to him.
Fennec and Boba along with their new guards head into Mos Espa, and Fennec tells Boba that he should have been carried, but Boba disagrees, and walks on his own two feet not carried like a useless noble. Arriving in a cantina where Max Rebo plays, he allows his helmet to be taken "to be polished" while he speaks to the owner, a twilek called Garsa Fwip. She offers respect to Boba and when his helmet is returned it is full of credits.
When they leave they are ambushed by warriors with energy shields and stun batons, a fight which proves difficult for the pair until they are aided by the two gamorreans. Fennec chases down one of the warriors when they flee, and the two gamorreans carry the wounded fett back to his bacta tank.
We return to his time captured by the Sand People, one of the younger ones takes him and the Rodian chained out into the desert. They witness a gang on speeder bikes destroying a moisture farm and painting a symbol on its wall, before he takes them to dig in the sand for water filled gourds.
As they dig for hours, the Rodian discovers a lizard like limb, before awakening a large six limbed creature which kills him and attacks the others, Boba fights the creature, choking it with his chains and killing it. The Sand Person and Boba return to the camp with its head where the young Sand person is celebrated on his might kill, however the leader of the group recognises that Boba was the one that killed the creature and offers his respect and water. . . .

High Points : So we're finally getting to see how Boba survived the Sarlacc, and we're getting to see some Tusken Raider society, something which as someone who has played as a Sand Person in the Star Wars RPG, I'm really glad to see.
Also, as in the Mandalorian series, this really looks and feels Star Wars, with plenty of known species such as Gamorreans, Twi'leks, Sand People, Jawas, etc, it feels familiar and comfortable as this is a universe we know intimately.

Low Points : While its early stages yet, The Book of Boba Fett is worryingly showing signs of the same problems that The Mandalorian and The Bad Batch have been showing, that of cramming everything we know into the series. While obviously Boba and is a known quantity, and we're going to get some characters from Jabba's palace around the place as the show is so far set there, alarm bells rang for me when Max Rebo turned up, having only managed to travel about 4 miles since we last saw him 5 years before.

Boba's characterisation seems a little off, this is the guy who faced off against Darth Vader when it came to profit, and here he's willing to be patient with the mayor of a small settlement on Tatooine showing him disrespect when he's setting up as a new crimelord. I know they're just putting the pieces in place for later episodes. But it really doesn't seem like the same guy.
And I know he's a long way past his prime, but in the Mandalorian he didn't need to keep going into Bacta tanks to recover, and we've not seen anything happen to him in that series or in between which would require him to need treatment. It just seems like they've retroactively fitted this in, he was hurt in the Sarlaac so needs treatment, but we didn't know about that when we made the Mandalorian, so . . . . whoops!
He's supposed to be the biggest galactic badass out there, but in this he gets kind of beaten up by some random thugs available for hire on Tatooine.

So what do you really think ? : I definitely enjoyed this episode, it rattled along at a good pace, kept me interested (mainly by the flashbacks), and is showing me things I've not seen of the Star Wars universe, so it's all positive.
I'm going to assume that the problems I'm seeing is just them setting up later story lines, as we've not even really seen what the plot of the season is going to be (perhaps getting a treatment to heal his bacta tank dependency).

Final Words : I noticed that Matt Berry voiced the droid in this episode, which makes me wonder if as we continue through the various Star Wars series if we're going to get the entire cast of The IT Crowd voicing droids, as we had Richard Ayoade in season 1 of the Mandalorian, and it would be funny to hear Chris O'Dowd, or Katherine Parkinson appear.

Summing up, not as triumphant a start as The Mandalorian, but a good start, fingers crossed that it keeps up the high standard set by that series.