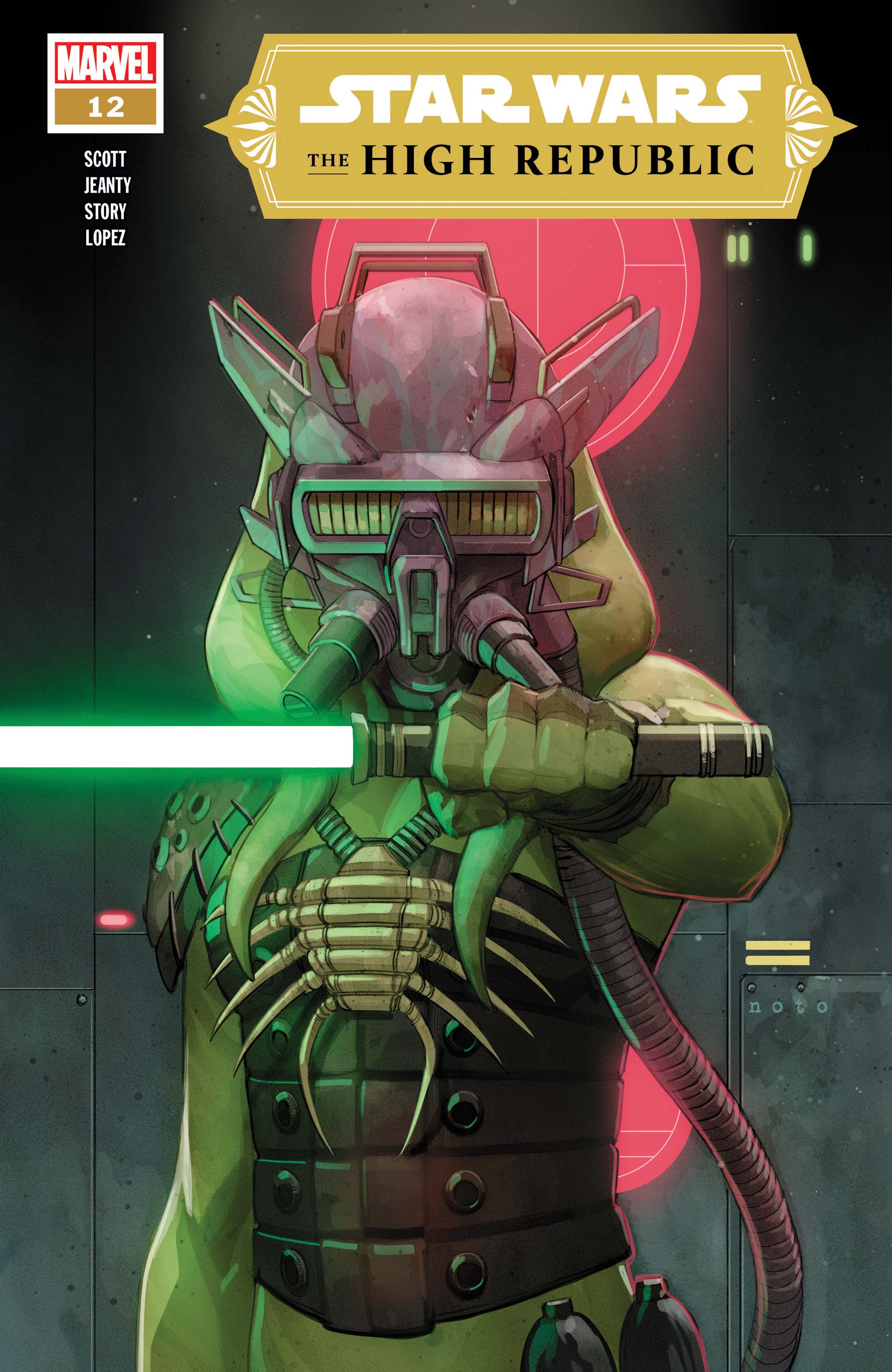 What is it ? : The story skips forwards, and the Starlight Beacon has been towed to a new system, Dalna, to support the planet Eiram after a continent sized cyclone which laid waste to the entire planet and why send support from the station when you could take the entire station.
Flashing back weeks to Xais, Avar Kriss is attempting to use the force to hold back the escaping Lourna Dee, but calls on the other Jedi to help, but Keeve is wounded and Sskeer is much weakened by his illness, so Dee escapes.
Back aboard the Starlight Beacon, Avar Kriss keeps going over the situation, and has found a way to make up for it, she has ordered a captured Path engine attached to the Ataraxia so they can attack the main Nihil base in No-space. The Jedi Council advises against this action, but Kriss goes ahead, aware that the Nihil have a weapon which can turn Jedi to dust.
Keeve visits Terec and Ceret in the medical bay, their skins are breaking down into dust with large cracks across them. Jedi Master Estala Maru visits, and says that Terec and Ceret are not the only ones lost, and asks Keeve to keep an eye on Avar Kriss. Keeve responds that this is a task for Sskeer, but Maru tells her that it is not possible and she knows why.
Flashing back to Xais once more, after Dee has escaped, Kriss puts the blame squarely on Sskeer, he lashed out against orders against the Nihil, and she suspends him as a Jedi to be removed completely on review by the Jedi Council, asking for his lightsaber.
Keeve breaks into Sskeers quarters on the Starlight Beacon where he is in isolation meditating on his condition, he reveals that he blames himself just as much as Kriss blames him, because he kept his condition to himself instead of making the other Jedi aware of it, leading to their failure on Xais. He tells her he has Magrak Syndrome, a Trandoshan condition which leads to base urges such as rage and aggression, he efforts to hold off the effects has nullified his powers with the Force. The doctors have told him there are treatments, but these may sever him from the force forever, but while they review them he must maintain his control or be a danger to all around him.
Keeve urges him to help her on the Ataraxia, but he refuses and she berates him for giving up.
The next day as Avar Kriss and Keeve Trennis board the Ataraxia and prepare to leave, Sskeer joins them and Keeve swears to keep him in line, the three share a moment repairing the harm done to their friendship before they depart and the Ataraxia engages it's Path engine and jumps away. . .

High Points : It's interesting to have an issue where the characters get to breath a bit and we can explore their relationships and the effects that all of the dramatic events recently have had on them. Especially interesting is Keeve and Sskeer, where in his vulnerability he is relying on his student to help guide him and keep him on the right path, a real sign that so quickly they've gone from Master and Student to true equals.

Low Points : The flashback storytelling just sucks though, it would have been far more interesting to just show the events in sequence, rather than have a bunch of "you know what you did" type statements, followed by flashbacks to show what they did.
I'm also not keen on Avar Kriss as a character, she was introduced as a distant boss character, the high mighty and pure Jedi Master who commanded the Starlight Beacon, but as they've included her more in the action, they've introduced flaws in her character and I'm finding it difficult to relate the two together, although perhaps this might be somewhat seen from Keeve's point of view, where Kriss was indeed a distant heroic figure, but as she's gotten to know her as a person is revealed as just as flawed as us all.

So what do you really think ? : The most interesting points of The High Republic aren't really visible anymore, Keeve as a Jedi who related to the weak and powerless, and they were what gave her insight and power is gone, replaced by Keeve as just another Obi-Wan.
The Drengir, an interesting and different type of foe, dangerous and menacing without being actually evil, just a totally different type of life with completely antagonistic views to the Jedi and animal life, are replaced by the Nihil, who seem to just be space pirates.
The Hutt alliance with the Jedi, where their differing world views and aims aligned for a time and they worked together is long gone, replaced by squabbles between the Jedi.
The High Republic seems capable of coming up with some brilliant ideas, and then promptly throws them away for just more ordinary stuff. A raider group with a different type of hyperdrive could easily pop up during the prequel era, for Obi-Wan and Qui-Gon to have dealt with, giving the High Republic era nothing really to differentiate it.

Final Words : I'm giving this issue a higher score than it really deserves, because I do think the premise of having some time for the characters to interact and grow a little is worthwhile and pretty brave. Something which is rarely done in comics and television, allowing the story time to pause and to deal with the effects of the events before moving on. However, the format of the storyline with the catch-up done through pretty irrelevant flashbacks, and the minor nature of the interactions between characters makes the entire issue seem pointless where nothing important happens.