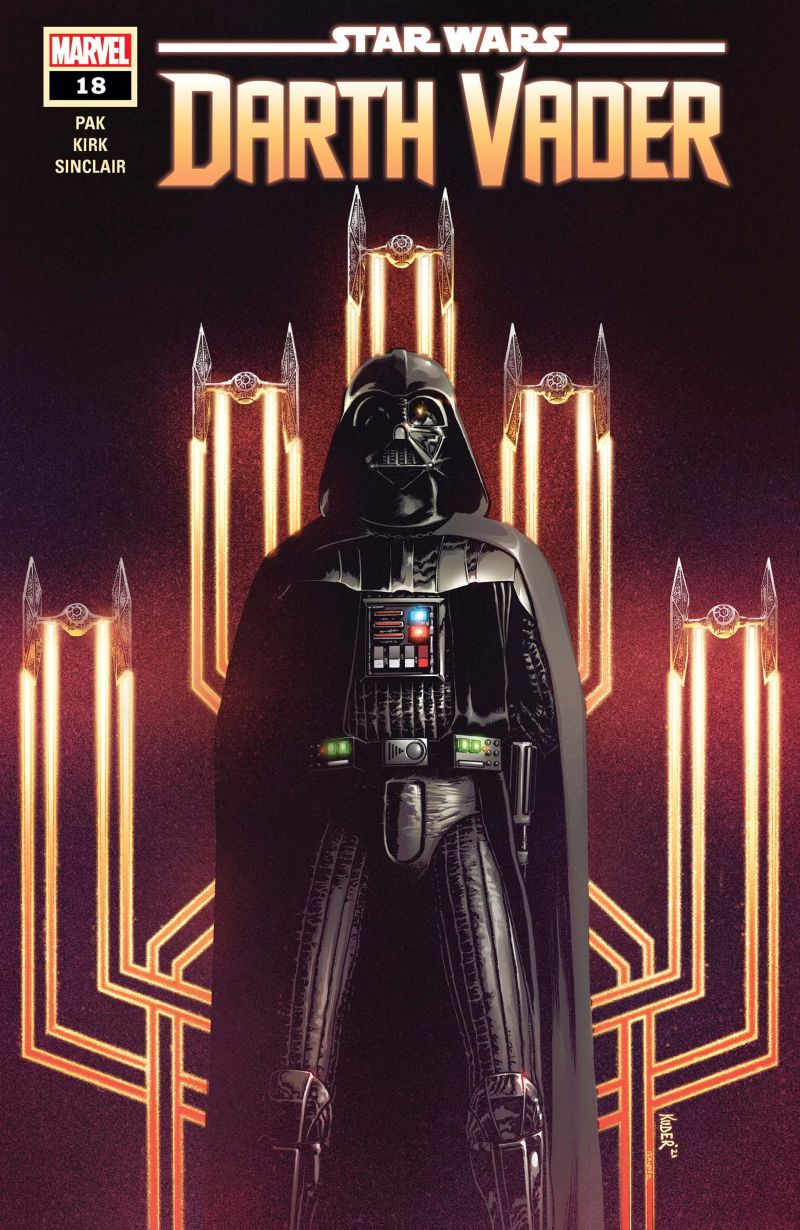 What is it ? : Vader remembers once more his fight with Luke on Cloud City, how he offered that they would bring order to the galaxy, and he thinks on how Palpatines acts have just brought chaos. That he himself will bring order, by finding the true traitors.
On the world of Vincorba representatives of the providers religion are gathering offerings, but the people are resistant because they gave everything only days before. The representatives call on the provider to protect them as they are attacked, but reveal that they pay only lip service to the religion as they now work for Crimson Dawn as they call for their Crimson Dawn guards to protect them.
They are defeated by explosives and snipers, paid for by Vader, who gathers them to be agents of order for him.
On the world of Calior, an Imperial Auditor calls on the people to surrender their ancestral homeland to him, which they will be allowed to rent back, he backs up his threats with Stormtroopers and Crimson Dawn troopers. A group called the Revengers attack, striking at Crimson Dawn, but the Auditor reveals he is only present as a hologram and is actually in one of a group of scout walkers which attack the Revengers.
Ochi of Bestoon helps the Revengers, before Darth Vader in his Tie Advanced destroys some of the Scout Walkers. The Revengers have heard of Vader, but believe that someone is judged by their actions and declare him the hero they've been waiting for, afterwards Vader tells them they are all disposable, as agents of order.
Meanwhile on Polis Massaa figure arrives and searches for what Vader was looking for when he was there, finding the droid replaying the message from Padme that she knows there's still good in Anakin. The Wreckage of Zed-6-7 crawls out of the ruins, and identifies the figure as Sabe who tells him she is looking for Vader. . . .

High Points : There's not a lot to this issue, but the one thing that I really liked was that they showed the corruption within the Empire, the Auditor working for both the Empire and lining his pockets with the help of Crimson Dawn. It's great to see how an organisation built around the self is easily corrupted by another organisation which plays to those same base drives.

We'll see if it's just a cameo, but I really liked Zed-6-7 and would kind of like to see him return, but I really think that Sabe will try to use him to betray Vader, but the loyalty that Vader programmed into him will come back as a plot point.

Low Points : This issue just seems to be Vader building a gang, which there doesn't seem to be a whole load of a point of, he commands the vast forces of the Empire, even if some of that has been corrupted. But with his Jedi senses and mind control, I would hope that he would be able to locate forces which would be loyal to him.

I also wasn't really impressed by the two religious leaders corrupted by Crimson Dawn, although it's exactly what they show happening with the Empire, it just seemed irrelevant, and perhaps the writers dig at organised religion.

So what do you really think ? : There really isn't much happening here, I'd definitely have been happier if instead of just gathering random gang members and assassins, if he was building a bad ass squad of rule breaking Imperial officers, scarred soldiers who are effective and loyal, but make any other less powerful leader worry about what they'll do next. These just feel disposable, so it just feels like wasted time gathering them.

Final Words : There's a whole load going on between Empire Strikes Back and Return of the Jedi, a time I always thought was just a few months as Boba Fett took Han to Tatooine, but apparently there were all these other things going on. The tight interesting story they wove in the first few issues, where Palpatine was punishing Vader, and Vader was learning his place once again is now long past and we're just getting a meandering tale of Crimson Dawns fate, which I don't think I particularly cared if I knew.