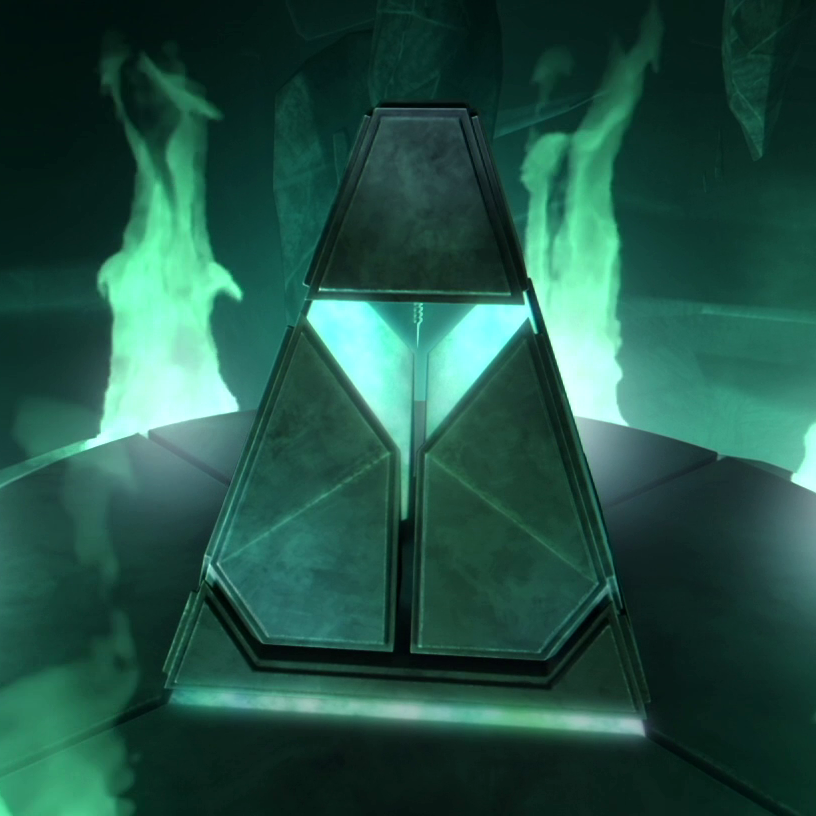 What is it ? : Following on from the last episode, Anakin has fallen asleep before the ship even clears the atmosphere, and has a vision of The Son, who asks him to join him on the Dark Side, before appearing within the ship and kidnapping Ahsoka.
He twists Ahsoka to the dark side by biting her, meanwhile Anakin and Obi-Wan crash their ship, Anakin wants to charge off and rescue Ahsoka, while Obi-Wan wants to ask the Fathers help.
They discover the father has been wounded my the son, and the daughter takes Obi-Wan to get a weapon to use against the son from the Altar of Mortis. Meanwhile Ahsoka and Anakin begin fighting as she is under the sons power, and the son becomes powerful from the combat, especially after Obi-Wan arrives and the three fight. Ahsoka gets the dagger of Mortis from Obi-Wan and gives it to the Son who plans to use it on the father, but the daughter steps into the way and is killed instead.
The Father tells the three Jedi to leave, as the Son requires their ship to leave Mortis, and that the death of the Daughter and therefore the light side here will have effects on the Clone Wars, intensifying the fighting and giving more power to the Sith.

High Points : Another good episode, not quite as excellent as yesterdays, but very enjoyable from beginning to end.
One element I never commented on in yesterdays review was the design work, the whole design of Mortis is amazing, with the Monolith used to get to the planet, the Dagger of Mortis, and the Altar of Mortis all being notably beautiful designs. My only question would be, given that the architects of "The Ones" are shapeshifters and able to fly, why so many staircases on the planet? They must have just loved the aesthetic.

Low Points : A couple of gripes about this episode, nothing serious, but this is definitely more flawed than the first part of this storyline.

What's with the Biting to turn Ahsoka dark? Why does the son need to become a beastial Goluum like creature to talk to Ahsoka and then bite her? If the biting is really necessary, she's tied up moments earlier, and the Son sets her free in his shapeshifted form, why not bite her then? In fact the only thing I can think of, is to surprise the audience by making them think she's got an ally within the Sons dungeon, and they shock them by revealing it was the Son all along. A bit disappointing.

This episode definity makes out that the dark side is more powerful, with the Son overwhelming the father, the daughter, Obi-Wan and Anakin all simultaneously. The only explanation I can think of isn't mentioned within the episode itself, is that the rise of the Sith and the Dark Side in the Galaxy has swung the power here as well, which is fairly reasonable, but would have been nice to hear it mentioned.

When Anakin and Obi-Wan land back on Mortis, they crash, and crash hard. The ship looks smashed and unusable, which given the Sons plan requires using it to leave Mortis seem a little problematic. Now I suppose it's possible they landed in a swamp and the ships just fine, but again, would have liked it mentioned.

So what do you really think ? : Not a high or low point but something that occured to me while watching. I mentioned yesterday that this may actually be Anakins destiny, and that the Jedi and Sith had assumed that the Chosen One bringing balance to the force was all about them, but in actuality could refer to bringing balance between the Light Side Daughter and the Dark Side Son, something not contradicted by this episode. However early in the episode, the Son reaches out to Anakin through a vision, I thought the voice calling was Palpatines. And this made me wonder, since Palpatines plan for taking over the galaxy strongly relies upon corrupting Anakin, what would he feel about Anakin fulfilling his destiny here and leaving the Jedi and Sith to play out his part on Mortis. Would Palpatine not reach out to him, send him a vision of his mother, or of Padme or something to make him want to return to the war where he can save his wife.
If fact is it possible that Anakins vision in Overlords was sent by Palpatine? Just a thought.

Final Words : Really enjoyed this one, and looking forwards to the final part of this storyline, season three really does seem to be going from strength to strength at this point.