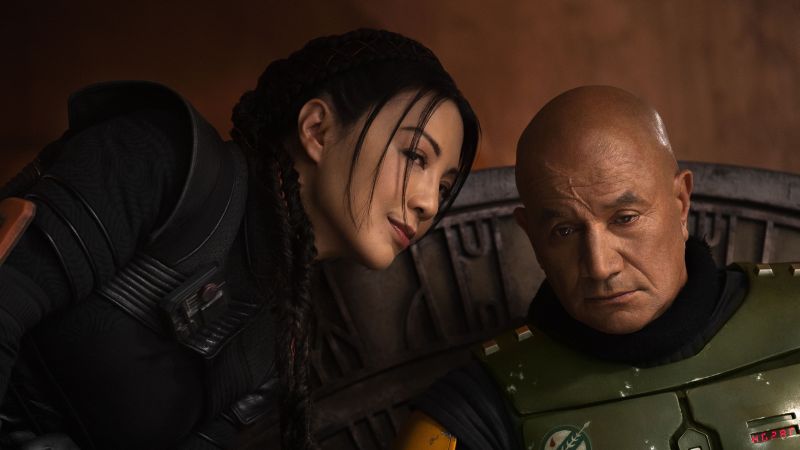 Chapter 3: The Streets of Mos Espa

What is it ? : We start with Boba and Fennec having a planning meeting with 8D8, under Bib Fortuna the city was split between three factions, the City Centre was controlled by the Trandoshans, the Worker District by the Aqualish, and the Docks by the Klaatoonians. While they discuss what to do next, one of Boba's subjects arrives to inform him that a street gang has stolen water from him, Boba agrees to deal with it.
That night Boba, Shand and the two Gamorrean Guards head into Mos Espa and find the gang responsible, youths cybernetically enhanced with droid parts who ride brightly coloured speeder scooters. When confronted they blame the robbery on the prices of water, and that they cannot afford it because there is no work, so Boba agrees to employ them. The water seller objects, but Boba pays him off, telling him to reduce his prices.
Boba returns to his Bacta tank, inside he dreams of leaving the Tusken Raiders and going to Mos Eisley to collect payment from the Pykes, but the Pykes say that they have already paid the Kintan Striders for access to the Dune Sea, but agree to pay the Tuskens if the Kintan Striders are disposed of.
Returning to the Tusken camp he discovers that while he has been away they've been attacked and slaughtered by the Kintan Striders, he put the bodies on a pyre and rides away on his Bantha into the desert.
He awakes from his sleep as the Wookiee, Black Krrsantan, wrenches him out, but he manages to reach his Gaderffii stick and stabs the Wookiee with it despite being surprised. The biker gang responds to the noise and engages Krrsantan with a variety of weapons like energy nunchuks, a blaster, knives, etc, but he shrugs off the effects.
The Gamorreans join the melee which moves into the throne room, where Shand drops the Wookiee into the Rancor pit, trapping him.
Shand and Boba are eating, but Boba is trying to work out what to do next, but 8D8 informs him that the Hutt twins are outside with a gift. Heading outside in full armour to meet them, where the twins apologise for sending Black Krrsantan, telling Boba that they were both lied to, and the Mayor has sold out Jabba's territory to the Pykes. As a tribute to Boba, they gift him Black Krrsantan's life and a Rancor.
Boba sets Black Krrsantan free, and has the Rancor put into the palace's Rancor pit, where he speaks with it's handler. The handler explains this is a calf and wears a blindfold, because it will imprint on the first face it sees, so Boba has the handler let it imprint on him, petting the massive creature in tender spots behind it's head.
He heads into Mos Espa with the biker gang and Shand, but the mayors Majordomo refuses to let them in, but when they break into the mayors chambers he is gone and the Majordomo flees in a speeder, with the biker gang behind.
They go through the streets of Mos Espa, until they catch him, where Boba questions the Majordomo who tells him that the Mayor has joined the Pykes. So Boba sends the bikers to watch the spaceport where they see Pykes arriving on board star liners and Boba realises the Pykes are readying themselves for war, so he must too.

High Points : There are two sections of this episode which excel, the look of the biker gang, with their brightly painted speeder scooters, and droid implants, they are obviously based on Mod's. Which even works as a name, as they are modified.
It's a unique look for Star Wars, and although different to anything we've seen, and some might think it doesn't work, it's interesting and I've no problems with it.

The section of the episode dealing with the Rancor is also pretty good, with the always wonderful Danny Trejo playing the Rancor handler. While I'm suspicious about the Hutts handing over a Rancor, the fact that Boba is befriending the creature and wants to learn to ride it is really pretty darn cool.

Low Points : But otherwise the episode is a bit of a mess, the speeder bike chase through the streets of Mos Espa is slow and badly done, with all the participants looking as if they are travelling at speeds much slower than real world cars. After the way the bikes were handled last week, this is a massive disappointment.

Although we only see one of the three "character" Tuskens dead, so there's a good chance there's survivors of the Tusken clan alive, we're led to believe that this clan which was so important last week has been killed off camera. This really smacks of the same storytelling techniques which brought us "somehow Palpatine has returned".
It's also an annoyance that the best part of last weeks episode gets killed off, showing they really had no idea what would be popular.

Even the fight against Black Krrsantan is done fairly poorly, with the Wookiee not seeming like a Wookiee, more like some kind of beast (although from a Star Wars D/6 point of view, it was quite satisfying to see a 6D strength Wookiee shrug off all attacks).

So what do you really think ? : One of the biggest problems with this series is that Boba isn't acting like Boba, this was the biggest badass bounty hunter in the galaxy, and he spends most of his time reacting to attacks on him. I would really have though he would go out and confront his problems, attacking and taking them head on, but this version of Boba spends his time wondering what he should do next, and being the puppet of others as he reacts to their actions.
The show also looks cheap, the fact that Daimyo / Crimelord Boba Fett's forces consist of him, Fennec Shand, 8D8, an R5 Astromech, two Gamorreans, and 4 bikers, really seems small scale compared to the number we saw Jabba with. But even beyond the fairly small cast, the CGI looks dated, the Pyke leaders face looked like a rubber mask, when Boba is riding his Bantha across the desert it looks nice, but year 2000 CGI nice, not anywhere near the quality we're now used to seeing in modern video games.

Final Words : I've heard this episode called "the worst episode of Star Wars ever", which I think forgets how bad some of the Clone Wars episodes were. But it's definitely the worst live action episode we've seen, with the special effects looking cheap, the action slow and clumsy, and the interesting elements killed off without us even seeing what happened.
A huge disappointment after last week, and since we're nearly at the halfway point for this series (7 episodes this season), it looks as if The Book of Boba Fett is going to be a long way from the quality of The Mandalorian.