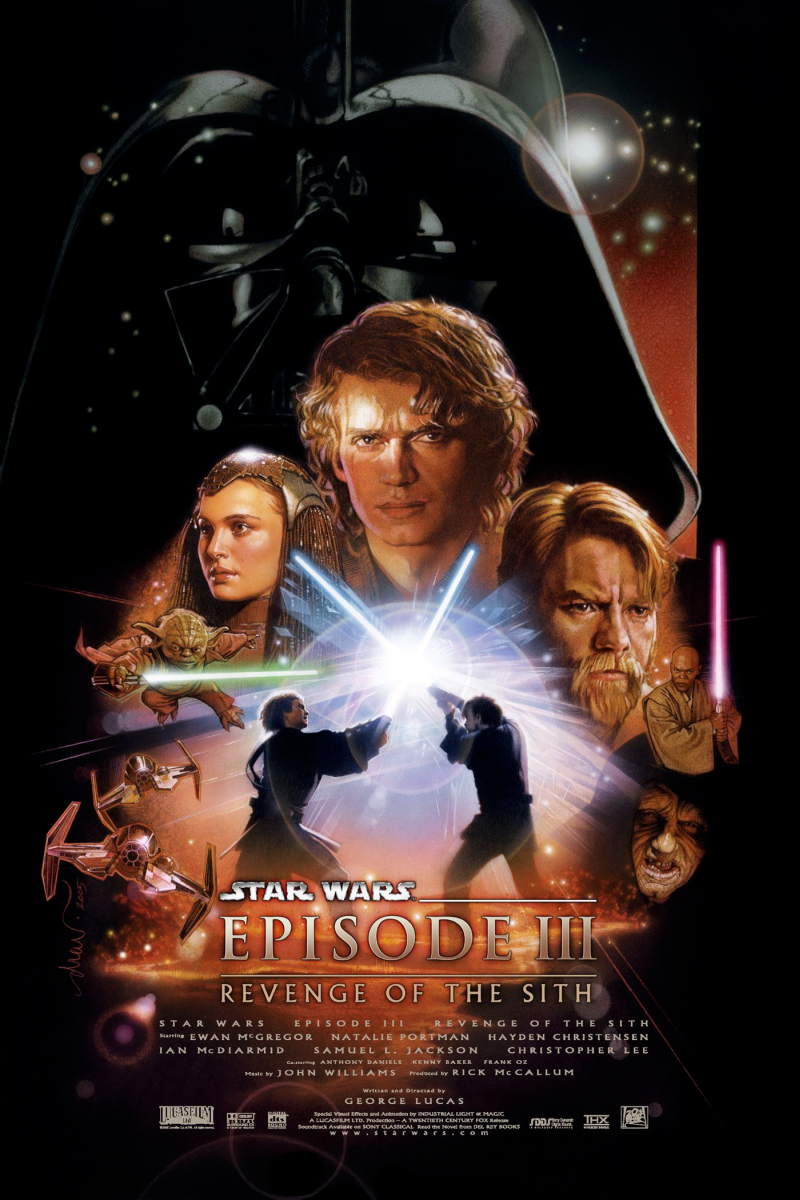 High Points : I'm going to start in an odd place, as my favourite thing about this movie is it's perfect balance. After seeing this movie back in 2005 at the cinema (as I have seen all of the Star Wars films for the first time, even the special editions), I received a pirated copy on VideoCD. As was common at the time, this meant splitting the movie across two disks into equal parts.
And exactly in the middle of the movie is the scene where Anakin is in the Jedi Council Chamber torn over whether he needs Palpatine to save Padme, or whether he needs to let the Jedi do the right thing and get rid of the Sith Lord. It's a quiet scene exactly at the balancing point of the movie, instead of cutting between Anakin visibly torn by the decision and the battle going on in the Chancellors chambers, with dramatic movie. The scene is quiet, and still, giving the weight of the decision which will shape the original trilogy time to breath.
It would have been so easy to do this scene in so many ways which would have all been fine, but George Lucas skillfully allows us to see the gravity of this scene. This is what it has all been leading up to, if this one moment plays out differently things won't go so wrong, lives will be saved, the galaxy won't ever see the emergence of the Empire. We get to stop and watch as everything goes wrong, and we know it's going to all go wrong, and there's really nothing that can be done about it.

Other good things, well this is definitely my favourite of the Prequel trilogy, and could well be up there in my top Star Wars movies, it really redeemed the prequels, which had been a fairly emotionless collection of movies. But Revenge of the Sith has so much going on, Anakin being torn between what he knows at his core is right, but his need to stop the fate which befell his mother happening to the woman he loves. Obi-Wan's disbelief at the man he loved as a brother destroying everything he has spent his life protecting. And Padme seeing the man she loves become everything she hates, destroying the Republic and democracy, something she truly spent her life fighting for.

There's so much quotable dialogue in here as well, from "This is how democracy dies, with thunderous applause.", to "You were my brother Anakin", which makes it difficult to believe this was written by the same person who brought us "I hate sand".

Low Points : While it's my favourite of the Prequels, it's not perfect, and the major stumbling point of Padme dying because she's sad, while Anakin survives having his legs and arm cut off, and burned on the side of a lava stream, has been discussed many times.
Obi-Wan stupidly also makes the comment, "Only a Sith deals with absolutes", something which is itself an absolute declaration, but these I forgive as the movie is really enjoyable.

So what do you really think ? : The prequels have so much going on the background with the politics, and on covering the many characters from Attack of the Clones for this site, I found another little thing I adored which the movies make no mention of.
On my early watchings of this movie I thought that the leadership of the Confederacy cowering on Mustafar, when they'd just struck at the core of the Republic with a battlefleet and managed to kidnap the Chancellor seemed a little odd. Why are the leaders of this galactic confederacy hiding out on a backwater mining colony?
On reading up on the background, it's because the attack on Coruscant was a last desperate gamble. Each of these leaders homeworlds had already been taken by the Republic, and they had no where else to go. And giving it that background the scenes on Mustafar take on a more last days of the fall of Berlin in World War 2, with the playing the part of the generals hiding out in the bunker as their enemies encircle them and their forces fall apart, and gave the scenes so much more meaning for me on a recent rewatch.

Final Words : A really enjoyable movie, and one that is put together so well, the action is well done, even if I'm not the biggest fan of the lightsaber fight between Obi-Wan and Anakin (it just doesn't capture me the way that Luke/Vader, Qui-Gon & Obi-Wan/Darth Maul, or even Yoda/Palpatine does), and even the Starfighter battle (usually my favourite part of Star Wars) leaves me a little cold as it suffers from the same problems that many Scifi battles of the era do (I'm thinking of Independence Day here where the fighter battles were mainly just a bunch of distant dots moving around the screen) where you don't feel as much a part of the action as the Original Trilogy made you feel.