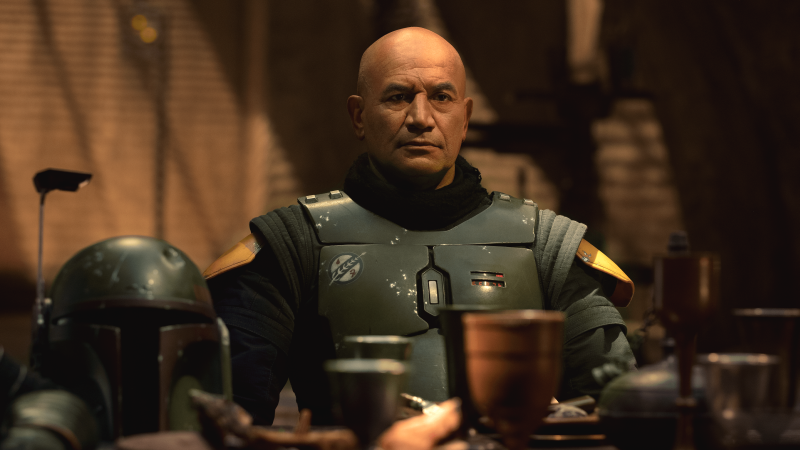 What is it ? : Boba is in his Bacta Tank dreaming, he thinks of riding across the desert after his Tusken tribe was slaughtered, that night as he camps he spots a flare in the sky and investigating he discovers the body of Fennec Shand after the events of The Mandalorian: Chapter 5: The Gunslinger.
He takes her barely alive body to a modification clinic on the outskirts of Mos Eisley where they replace her guts with droid parts, and as she recovers they discuss payment for his help, he wants her to aid him in recovering his ship. They break into Jabba's palace, sneaking in through the kitchens where they must disable several droids including a cook droid with multiple arms with cleavers on them.
They reach Boba's ship, and are attacked by a group of guards, fighting their way to the ship, and having to blast the door weights to open it and escape with the ship.
Boba decides to get revenge now he has his ship, locating the Biker gang and blasting them with it's weapons, and then goes to retrieve his armour from the Sarlacc which attempts to each the ship until they kill it with a seismic charge.
Afterwards they speak about their plans, Boba doesn't want to go back to bounty hunting, thinking he is better and smarter than those that paid him to risk his life, he wants to start off a crime family of his own, offering Shand loyalty in return for her help. Fennec considers this, and then decides to stick with him for the moment.
Awakening, Boba puts on his armour and they head into Mos Espa, at Sanctuary they witness Black Krrsantin fighting some Trandoshans, he rips the arm off of one of them although Garsa Fwip offers to pay off his bar tab if he doesn't. Boba tells her that it was worth a try and she shrugs in response. Boba then follows Krrsantin outside and offers him a job.
At his palace he holds a meeting of the leaders of each of the districts in Mos Espa, the Trandoshans, the Aqualish and the Klaatonians. He tells them that together they could fight the Pykes, but they respond that so far the Pykes only threaten his territory, so they are not under any threat. He counters that he will fight the threat alone, and they reluctantly agree to not help the Pykes, an offer better than the Pykes will offer and he later tells Shand that they must know they will be next if he doesn't win.
As they leave, Boba and Shand discuss going to war, and Shand asks him how much money they have left and talk about buying in help as the Mandalorian theme plays. . . .

High Points : While the episode chugs along at a fairly slow pace, with most of the (long for this series) run time going into bringing us up to date with the flashback timeline, there's a number of touches which make it enjoyable. The fight to recapture Boba's ship is excellent, Fennec using a seeker drone to map out the building and the guards locations ahead of time is clever and well done. The show is clear to show how Boba has changed, from now being completely healed of his time in the Sarlacc, to his change in attitude deciding to become Daimyo and rule for himself.

It feels as if we're done with the story building now, and it's time to start bringing all the pieces back together to build towards the finale.

Low Points : That said, it does spend a lot of time building the story and is a fairly slow episode, and even for it's attempts at filling in the background it raises a number of questions and doesn't answer them, and looks unlikely to.
The main question I've got is exactly where all the time has gone? It's 5 years between Return of the Jedi and The Mandalorian, so how long was Boba in the Sarlacc? How long was he with the Tuskens? I'm interested to know, because as portrayed in the series it looks as if both were only a matter of days.
it really feels as if more should be going on in these 5 years, but the loop is closed and we now know what happened, so . . . it's a bit disappointing.

So what do you really think ? : A slow burner, but an enjoyable enough episode, the flashbacks are now told and the battlelines are now laid out, Boba has to finish raising his army, but with 3 episodes to go, it feels as if we're entering the action phase of the story. With the next episode getting Boba to get his gang together, and then a double part final battle taking us to the end of the season.

The series also feels a little disjointed, as the Biker gang from last episode don't appear at all, and the Rancor only makes a token appearance to scare the district leaders and remind them they're sitting over the Rancors cage. I really feel this is a tactic so all these forces can be brought back together at the end to bring Boba to victory, with the Tuskens, Rancor, Gang, Black Krrsantin, Garsa Fwip plus whoever he picks up in the next episode all turning up for the final rumble with the Pykes. Which is fine, but I'd really like to see it looking as if Boba is actually building a force like Jabba had, instead of it still looking like there's only about 5 of them in the entire palace.


Final Words : As the episode began showing the Bacta tank, I joked to my sons that it wasn't going to contain Boba, but still the Gamorrean from last episode who was placed in it, and we were going to get a flashback into his history, with the Bacta tank showing us flashbacks of whoever is in it.
And doesn't even seem that implausible, as that's what Star Wars seems to have become these days with every minor character popping up and needing a backstory told for them.
Fingers crossed for the final three episodes that it picks up speed and starts taking us forward rather than being stuck in the past as it has.