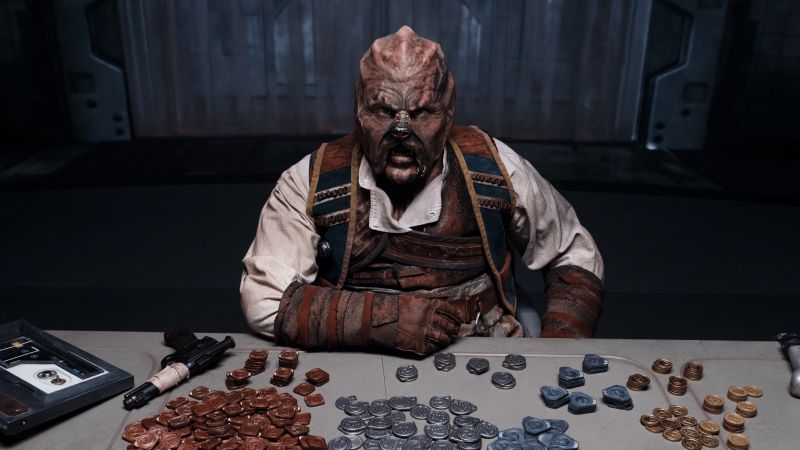 Chapter 5: Return of the Mandalorian

What is it ? : We begin at a meat processing factory ran by Klatooinians, we see through the curtains seperating off from the factory floor the familiar shape of Mandalorian armour, but instead of Boba Fett, it's Din Djarin, the Mandalorian himself, and the caption rolls naming the episode Return of the Mandalorian.
He is there for the boss of the factory, and a fight breaks out in which he engages the Dark Saber, and as well as killing all his assailants, he cuts deeply into his leg.
As he leaves the workers block his way, but he tells them there is a pile of Republic Credits they can get payment from their now deceased boss however they feel fit, and they rush away allowing him to leave.
He travels across the city, built on the inside of a giant ringworld, and collects his bounty, which is information about how to access the substrata of the ring world as well as payment in cash. He follows the instructions given him, and spots signs leading him to the hiding place of the Armorer and Pax Vizsla. He agrees to rejoin them now his mission to find Grogu's people is over, and the Armorer makes comment on the Beskar Spear he carries, that it's entire purpose is to defeat Mandalorian armour, and that Beskar is for armor, not weapons.
He agrees, and they melt it down, and Djarin has her reforge it into a gift for Grogu. He demonstrates the Dark Saber for her, and she mentions that it must be taken in combat or carrying it means nothing, and that it's capture from Bo-Katan led to the destruction of Mandalore, and we see a massive Imperial fleet of Bombers flattening the surface of their world.
She offers to help train him with the saber, and she fights, her Beskar tools against the Dark Saber, which fights Djarins efforts as if it has a mind of its own. Pax Vizsla mentions that it was his ancestor that made the Dark Saber, and perhaps it would be better in his hands, so the two duel over it, with Pax managing to get the Saber, but Djarin finally winning. Afterwards, the Armorer questions the pair as to their keeping of the rules, whether they have removed their helmets, Vizsla replies no, but Djarin cannot answer, so is a Mandalorian no more. He questions if there is no way he can redeem himself, but the only way is in the waters of the now destroyed mines of Mandalore.
He leaves, taking a passenger flight to Tatooine where he has received a message from Peli Moto, who claims to have found a replacement for the Razor Crest. He arrives in time to rescue her from a beast, and she reveals a pile of parts of a Naboo N-1 Starfighter. Although he isn't impressed, he helps her put it together, getting parts from the local Jawas and rebuilding and upgrading the custom built starfighter.
He takes it for a test flight, blasting through Beggars canyon, and up into space where he buzzes the same transport ship that brought him to Tatooine. He is intercepted by two Republic X-Wings, who request information from him, and the leader of the Squadron, Carson Teva, recognises his voice, questioning him.
But Djarin kicks in the modified boosters and races away so fast that Carson's wingman thinks he's gone into Hyperspace.
Landing once more, Peli tells him someone came for him, but she sent them away, but a voice calls out to him, and it's Fennec Shand asking to hire him. Since it's for Boba, Djarin offers to help for free. . . .

High Points : So, this season of The Mandalorian is great.
Really, in an episode of the Boba Fett series, Boba himself doesn't appear at all, and only is mentioned in the final minute of the episode, so this really is an episode of The Mandalorian, and is really pretty good.
I adored the look of the Ring World, something we're all aware of from Halo, but it looks awesome here, and it's great to get a peek at the direction that The next season of The Mandalorian is going to go, with Din looking for Grogu to ensure he's okay, and probably helping Bo-Katan to reclaim Mandalore, so he can visit the mines and redeem himself.

Oh, and the Naboo Starfigher is such a lovely design, and looks great, but it's no replacement for the Razor Crest (where's he going to put his captives).

Low Points : I really get the feeling that the Mandalorians, especially the Death Watch, are making it up as they go along. Din knows that Mandalorians can remove their helmets, he's seen Bo-Katan do it, so why he accepts rejection from his clan so easily, and doesn't just say that he'll join clan Kryze instead?
The fact he can redeem himself in using the waters of the mines of Mandalore makes little sense. Yes, since the fall of Mandalore it's a bit of a quest, but back in the days when they were mining the planet it seems pretty routine, like a baptism, not common, but easy to get if you want.

On the subject of making it up, the Armorer mentions that the Beskar spear is wrong, because it's designed to pierce Mandalorian armour, and that Beskar is for armour not weapons. But then goes on to practice with Djarin using a Beskar Hammer. Errr, I know the hammer is mainly a tool, but it's not armour! Oh it's fine for me to use Beskar for my tools, but no one else can use it for anything but armour.

Final Words : The ties between the series seem too tight now, and The Book of Boba Fett doesn't seem like a stand alone series any more. We know that obviously the start of the series ties into events from the Mandalorian, but it felt like it was it's own thing. I was considering recommending it to my brother, as he's obviously aware of Boba, but hasn't watched The Mandalorian, and I thought this might be an introduction into Star Wars TV shows.
But after this episode, there's no way it'll make sense without him having watched the other 2 seasons. They really should just have made the Book of Boba Fett title a subtitle, with it's full name being "The Mandalorian: The Book of Boba Fett" to make it clear this is just a side story to the main series.