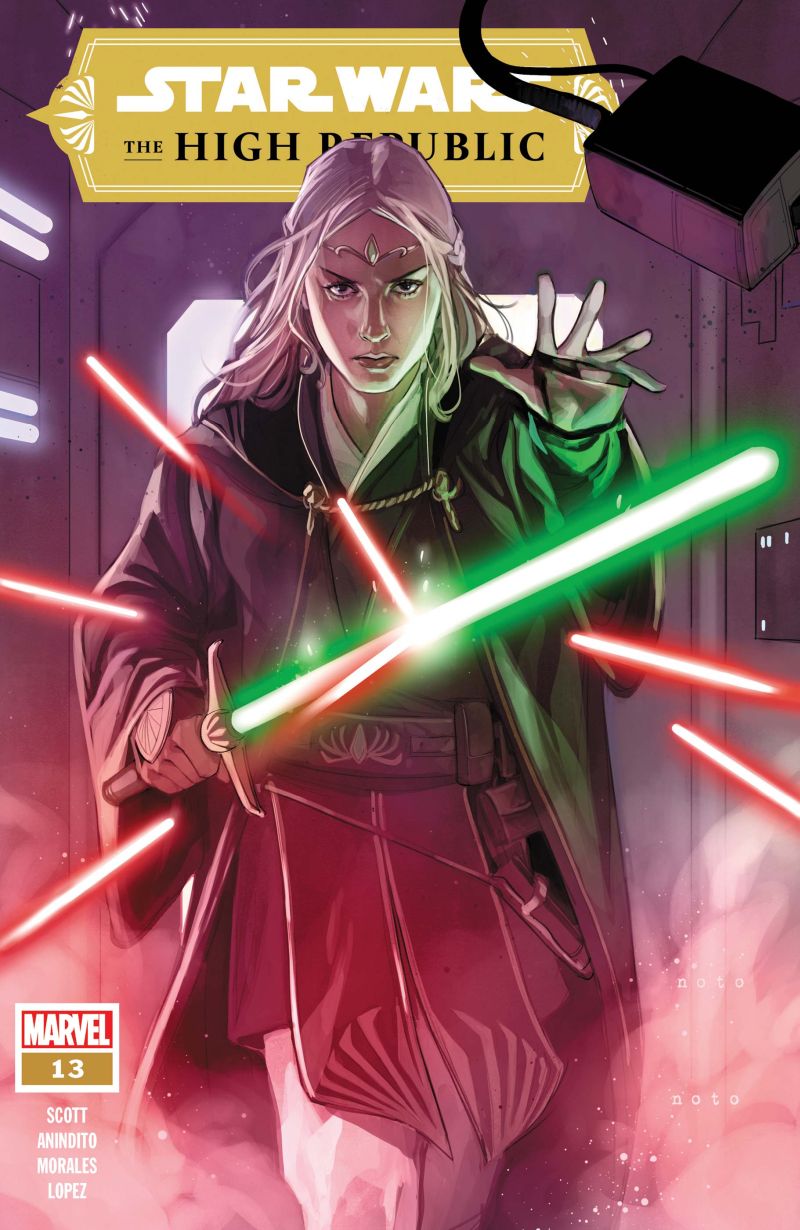 The High Republic 13: The Battle of No-Space

What is it ? : Lourna Dee and fellow Tempest Runner, Zeetar are hiding out on the Great Hall of the Nihil in No-Space, discussing over hologram the danger the Jedi present and how the repairs to Zeetars wreck armour are going with the leader of the Nihil, Marchion Ro.
They feel they are safe, but are alerted when the Jedi Cruiser, Ataraxia, emerges from a path above them. They order all forces to defend the station, but Zeetar is hesitant due to him lacking his powered armour, but Dee urges him forward.
Dee thinks that the Jedi won't attack due to their pacifist ways, but the Ataraxia opens fire and she realises the Jedi are serious about attacking and are not going to try to negotiate first.
Zeetar orders gas pumped into the corridors, but as the Ataraxia docks, the Jedi push the gas back using the force, and we see Avar Kriss, Sskeer, Keeve Trennis and Monshi battling their way through the Nihil.
Zeetar faces off against Avar Kriss with a flamethrower, knowing her lightsaber cannot shield her against it's flames, but she simply crushes the gas tank using the force, causing it to explode, and she moves on. Sskeer indicates to Keeve that Avar seems out of control and out for vengeance, so she rushes after her, and they lock sabers as Keeve tries to calm Kriss down, reminding her that Sskeer acted this way, but had the excuse of his disease making him out of control.
But Kriss refuses to be lectured by someone she trained, and someone who she knows has their own doubts about their actions, so Keeve is forced to knock Kriss to the ground, but then herself is blown up as Lourna Dee emerges wearing Zeetars Powered Armour suit, revealing that she lied to him about it not being ready.
Kriss and Dee fight, Power suit and sword against Lightsaber, but the Jedi is more powerful, so Dee uses the other weapons in the armour causing explosions along the corridor and Kriss questions that Dee would hurt her own people. But Dee explains that's the point of Cannon Fodder.
Kriss looks at the unconscious form of Keeve, which angers her, powering her abilities with rage she uses the force to tear the powered armour into shreds.
Lourna Dee emerges, and ignites the lightsaber she took from Terec, which just angers Kriss more, and she hacks Dee's hand completely off, and stands ready to strike a killing blow into the now defenceless woman, as Keeve regains consciousness and calls for her to stop. . . .

High Points : The issue does a good job of piling on reasons for Avar Kriss to get angry and turn to the Dark Side for power, the stolen lightsaber, the wounded Keeve, on top of all that Lourna Dee has done, it's completely understandable that Kriss would be absolutely raging at her.
I also enjoyed the backstabbing side of the Nihils, that Dee would lie to her ally, just so she could steal his armour and use it herself.


Low Points : But there's not much to this issue, one long fight really, and with it focusing on Avar Kriss so much, we don't even get mention of characters which I'd consider more core to the comics, like Terec and Ceret, and even the main two characters Keeve and Sskeer are only in fairly minor supporting roles.

So what do you really think ? : If they truly take Avar Kriss down a dark path, having her embrace the dark side to destroy the Nihils, but then become the major threat herself (after all, her plans have constantly been rejected by the Jedi council, so she has reason to turn on them if she proves (at least in her mind) that she was right and destroys the Nihil). Then this story line could become really interesting, this very pure Jedi, who did everything right and still failed, now embracing the Dark Side and succeeding in protecting people, to the point where she imposes her will on the galaxy and becomes a would be tyrant.
But from what I've seen, they'll dial this back next issue, and have her come to her senses, and we'll be back to the same old same old.

Final Words : I've said it before, The High Republic has some great ideas in it, but they really don't seem to recognise those ideas and use them, falling back on convention that we've seen before, and are now pretty bored with.