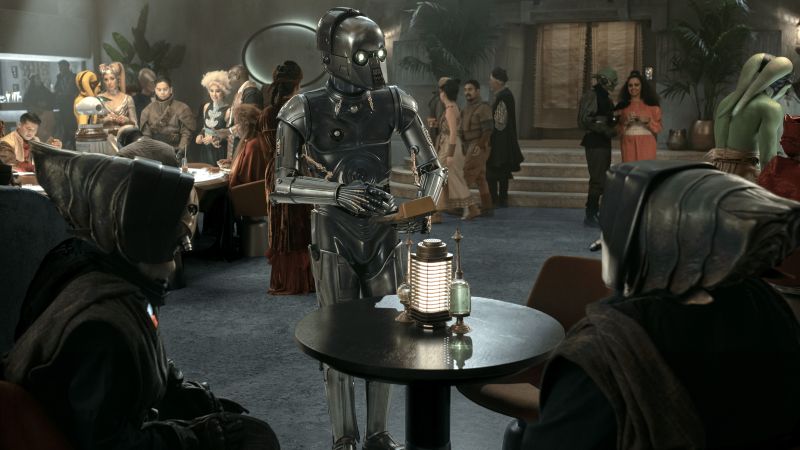 Chapter 6: From the Desert Comes a Stranger

What is it ? : We begin with a group of Pykes meeting at some water vaporators on Tatooine, and they are approached by Cobb Vanth the Marshall of Mos Pelgo, last seen in Episode 1 of season 2 of The Mandalorian. He warns them that he won't allow spice trade on his territory, but says if they leave now he'll just clock it up to bad map reading and no laws will have been broken, but they attempt to draw guns on him so he shoots three of them, allowing the fourth to leave with their money, but without their spice, which he scatters into the desert.
We then move to The Mandalorians Naboo Starfighter approaching an unknown world, he lands and is met by R2-D2 who he asks to take him to Skywalker because he wants to see Grogu. R2 takes him to where a number of Ant-Droids are building a stone building, where he gets the droids to build The Mandalorian a bench to wait on while R2 himself powers down.
Nearby, Luke Skywalker and Grogu are meditating, but Grogu becomes distracted by a passing Frog, which he uses the force to levitate towards his mouth until he loses his attention when Luke tells him off. Luke demonstrates the power of the Force by levitating numerous frogs from the swamp around them, causing Grogu eyes to widen and his mouth to hang open in hunger.
They go for a walk through the forest where Luke tells Grogu of Yoda, and asks him if he remembers anyone from his home who spoke like Yoda did, but Grogu doesn't remember, so Luke offers to help bring back the memories. Grogu falls into a trance, remembering the 501st legion of Clonetroopers invading the Jedi Temple on Coruscant, and the Jedi who were defending him falling under the combined blaster fire of the massed troopers.
When he awakens, Luke tells him that the galaxy can be a dangerous place, but he will teach him to defend himself.
The Mandalorian wakes with a start as R2 reactivates, only to discover Ahsoka Tano standing nearby, they speak and Ahsoka tells him that she warned him about the difficulty of breaking the attachments he has with Grogu. Although he makes the excuse that he is just checking up on the foundling who was under his care, and he is just bringing him a gift that Grogu is due as a Mandalorian foundling, she makes him consider whether it is for himself or Grogu that he has come.
They watch Luke and Grogu from a distance, before he leaves the gift with Ahsoka and leaves in his ship.
Luke attempts to teach Grogu how to force jump, but his tiny frame only jumps a few inches, so takes him through the forest in his backpack, demonstrating what Yoda taught him, before setting him down and giving him a training remote to practice with. After being shot by it, Grogu demonstrates the ability to leap out of its way, until finally tiring of it and grabbing the remote with the force and crushing it.
Ahsoka gives the gift to Luke, explaining that it was from The Mandalorian and the bond between the pair is unusually strong, and the two watch Grogu train. Ahsoka tells Luke he is doing a good job in teaching, but Luke responds that it is more like reminding Grogu of things he already knows. She compares Luke to his father, and then leaves, saying they may meet again.
The Mandalorian returns to Tatooine, landing in the hangar at Jabba's palace where he is met by a Gamorean Guard, who takes him to Boba when he says that he is here at the request of Fennec Shand. Inside Boba holds a meeting with the Mods, Black Krrsantan, Fennec and a few others, telling them that while he now has enough enforcers, he doesn't have an army, and The Mandalorian says he can possibly help with thay.
He takes his Fighter across the desert, spotting a Jawa Sandcrawler with a massive Krayt dragon skull on the top, before landing at Mos Pelgo, after being bothered by the new deputy, he meets with Cobb Vanth, and tries to recruit the townspeople to help Boba. Cobb tells him that it's not their fight, but he'll speak to them and see what he can do, before the Mandalorian leaves once more.
As he watches the Mandalorian leave, Cobb spots a figure in a wide brimmed hat walking across the desert towards the town, and he orders the towns people inside for a while.
The figure approaches, and is revealed to be Cad Bane, who tells Cobb that whatever Boba has offered them, the Pykes will match just for them to sit the battle out. Cobb tells him to tell the Pykes that Tatooine is closed to the spice trade before a gunfight breaks out where Cad leaves both Cobb and his deputy on the ground from multiple blaster shots.
In the Sanctuary in Mos Espa, Garsa Fwip watches two Pykes walk in and take a table, she sends he assistants to help them, but they are rejected, and they order a drink before leaving before it is delivered. They leave behind a cannister which the droid attempts to remind them about, but it explodes, blasting out the front of the bar.
Back at the New Jedi school, Luke and Grogu sit, and Luke offers Grogu the gift which The Mandalorian left, which is revealed to be a tiny set of Beskar Chainmail. But also offers him Yoda's Lightsaber, telling him he can only take one, if he takes the Lightsaber he'll train as a Jedi, but his long life may be mean his training will take a lifetime for The Mandalorian, but if he takes the Armour he'll leave the academy.

High Points : It's another episode where Boba Fett only gets a guest appearance in his own series, turning up in only one scene for less than a minute. Which is at least more than last weeks.
Where I joked that last weeks episode was The Mandalorian Season 3 Episode 1, but with my sons we kept asking if this weeks was Cobb Vanth episode 1, Luke's Academy episode 1, Ahsoka episode 1, or The Mandalorian Season 3 Episode 2.
But that aside, damn this was a good episode, full of so many good little touches, like the massive ant-droids building the new Jedi school. A column of these droids, gathering racks and constructing the dome of the building, fantastic to see such high technology being used to construct such a rustic building.
And as Luke and Grogu walk through the forest, Grogu's little legs cannot keep up, so every time he falls behind (which is every couple of seconds), Luke lifts him with the force, gesturing to hop him forwards to keep up. Such a subtle gesture, but one that made me smile.

Low Points : If I have to criticise this episode, apart from the lack of Boba Fett in The Book of Boba Fett, I'm pretty annoyed at Luke. He is trying to force Grogu to end his relationship with The Mandalorian, even though Luke's life is made of relationships, with his Father, with his sister, and of course with his many friends. He of all people shouldn't be bothered by Jedi having relationships and connections to other people, especially as he was never taught in that fashion as he never studied at the Jedi Temple.
My eldest son however really liked this portrayal of Luke, commenting how it's leading towards his failure shown in the Sequel movies, how he's trying to be the most puritanical of Jedi, the one that raises his lightsaber against his nephew, and then sees all of his work come crashing down leading to him cutting himself off from the Force and going into hiding. Which I do think is an interesting spin on it, and something I hadn't considered.

So what do you really think ? : My family were the real thought provokers when watching this episode, my wife particularly made the comment about the decision that Luke forces upon Grogu at the end of the episode. To choose between a weapon or armour, a very non-pacifistic and seemingly non-jedi choice. To choose the weapon is to become a Jedi supposedly the peacemakers, to choose the Armour is to become a Mandalorian, supposedly warlike.

Final Words : The training that Grogu is receiving, coupled with him remaining a Mandaloiran foundling, is that he seems the ideal person to grow up to wield the Darksaber, a Mandalorian Jedi.
While that seems a long way off, I find it an interesting way of tying these traditions together, Grogu leader of Mandalore.