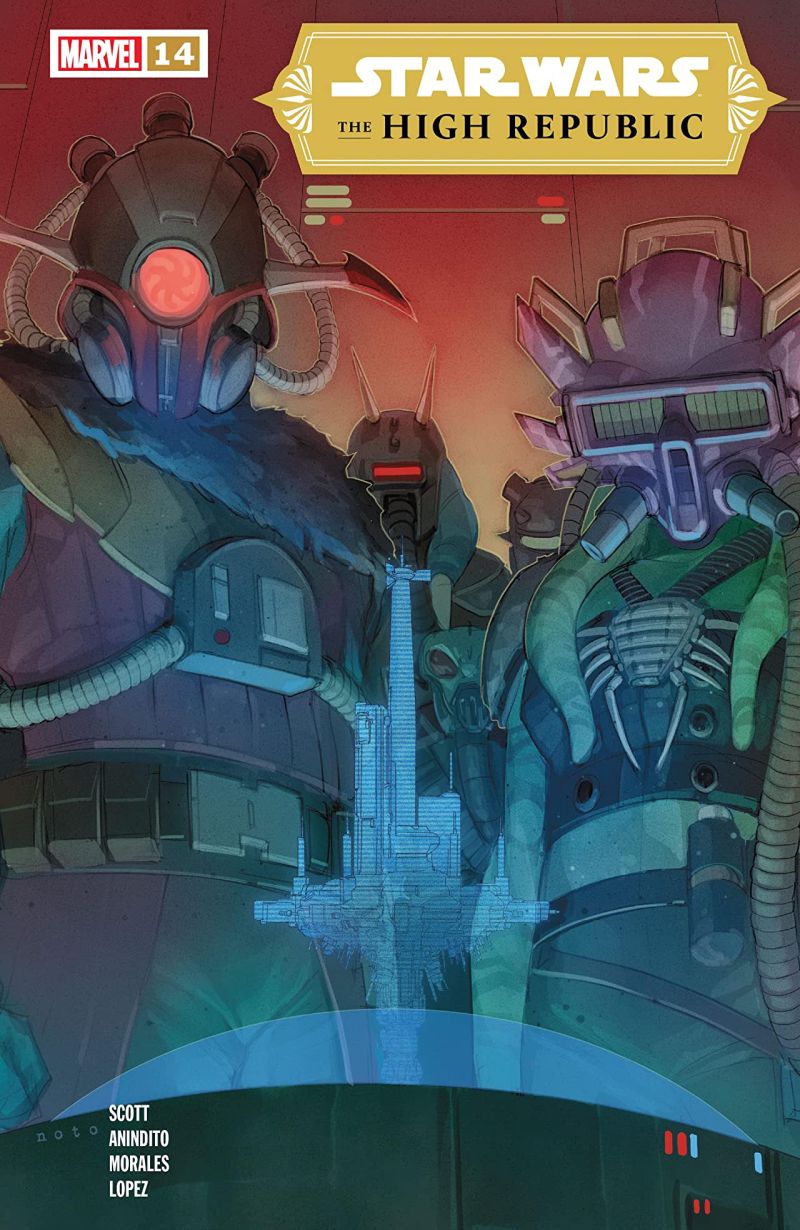 The High Republic 14: The Edge of Destruction

What is it ? : The Great Hall of the Nihil is shaken as it's hull is blown open, and as the Jedi scramble to avoid being hurled into space they contact the Ataraxia to find out why they've opened fire on the station while their own people are aboard. But the crew inform them that the Nihil have opened fire on their own station, so disable the Nihil vessel. When the crew of the station question why they've risked their own lives to save the Nihil, Monshi informs them that they are Jedi, and they serve life.
Meanwhile, Avar Kriss hacks down at Lourna Dee, but Keeve Trennis leaps in the way, calling on her to come to her senses, that she's already won. Kriss realises that she has come close to the Dark side and ceases her attack, only for Dee to grab her lightsaber once more and hold it to Keeve's throat. Kriss refuses to strike her, instead hurling her backwards with the force, and disarming her.
They take their prisoners aboard the Ataraxia and use it's path drive to return to the Starlight Beacon. During the journey, Kriss comments on how wise Keeve has become, which Keeve puts down to having the best teacher, and then Sskeer tells Keeve that he is proud of her, but this was his last mission as a Jedi, that no matter what the Jedi council decides of his condition, that he will be a Jedi no more. She tells him she'll make him proud, but he tells her that no matter what he'll be proud, and that she should just do what she knows is right.
As the Ataraxia arrives back at the Starlight Beacon, Kriss contacts the station only be have Stellan Gios respond, who informs her that the Council has put him in charge of the Beacon due to her abandonment of her position by going on a wild mynock chase. She points out that her mission was a success, but is interrupted as the engines of the Beacon explode and communication is cut as the station begins to fall out of orbit. They dock and begin evacuating the station personnel onto the Ataraxia, and consider reactivating the stabilisers from the hub, even though parts of the station are cut off due to the explosion.
The Jedi begin frothing at the mouth, and Kriss turns on Sskeer demanding that he stay away from her, and they realise that the creature that attacked Terec is here on the station turning the Jedi on one another.

High Points : The High Republic has a tradition of turning back on decisions, but they've given Sskeer a nice farewell speech to Keeve, when she tells him that she will work to make him proud. He tells her to not do that, but instead do what she knows is right, and that he'll be proud of her then. It works well, as doing things for prideful reasons can be seen as bad and a possible path to the Dark Side, but also that he trusts her to always do what is right, so will always be proud of her.
It's an excellent final sentiment, but as always with this comic, I'm concerned that they're just going to take this back, as they just did with Kriss's dabble with the Dark Side.

I'm also liking the place they've now put Sskeer in, where the creature that is aboard the Starlight Beacon is effecting the Jedi through the Force, turning them on one another and driving them crazy. But Sskeer's illness which is blocking him from the Force makes him immune to this attack, putting him in place to save the day. Combined with the above speech he gave to Keeve, this does provide him with the heroic moment for him to die, saving the day due to his illness which would stop him being a Jedi anyway, but having passed on his wisdom and guidance to his former apprentice.
But, I fully expect them to not take advantage of this, and Sskeer to be around for many comics to come.

Low Points : The Jedi council continue to be against the heroes for no reason, having replaced Avar Kriss in her absence, even though as far as we know she's only been gone for a day or so. At this point the Jedi council has been against the war versus the Drengir, a species who wanted to eat animal based lifeforms, and now they're against the war against the Nihil who slaughtered those attending the Republic fair.
I know the Jedi are supposed to be pacifists, and I know that going to war eventually leads to the downfall of the Jedi order and the rise of the Empire. But what's the point of being a lightsaber wielding cult of warrior monks if you're not willing to go out and fight the bad guys once in a while.
It's really starting to look like they just want plausible deniability, so when they're accused of going to war all the time, they can turn round and say, that they never ordered those wars, it was just a few bad eggs who started them. But when the wars are won, they can claim responsibility.

So what do you really think ? : As I predicted last issue, Avar Kriss's fall to the Dark Side is reversed, in a fairly good way. But then we're presented with the Jedi council behaving so irrationally, that I'm starting to think that I'd support Kriss going Dark Side and wiping them out.

Final Words : I was concerned this issue was just going to be reversing the path Kriss was on and ending Lourna Dee as a villain for the moment, but it's taken the story up a beat as the Jedi's home is actually under attack, and we seem to be moving to a confrontation with the creature which has caused the Jedi so many problems. Which in turn will turn the tide against the Nihil, and end the war against them. Which to tell the truth isn't really grabbing me the way the war against the Drengir did.