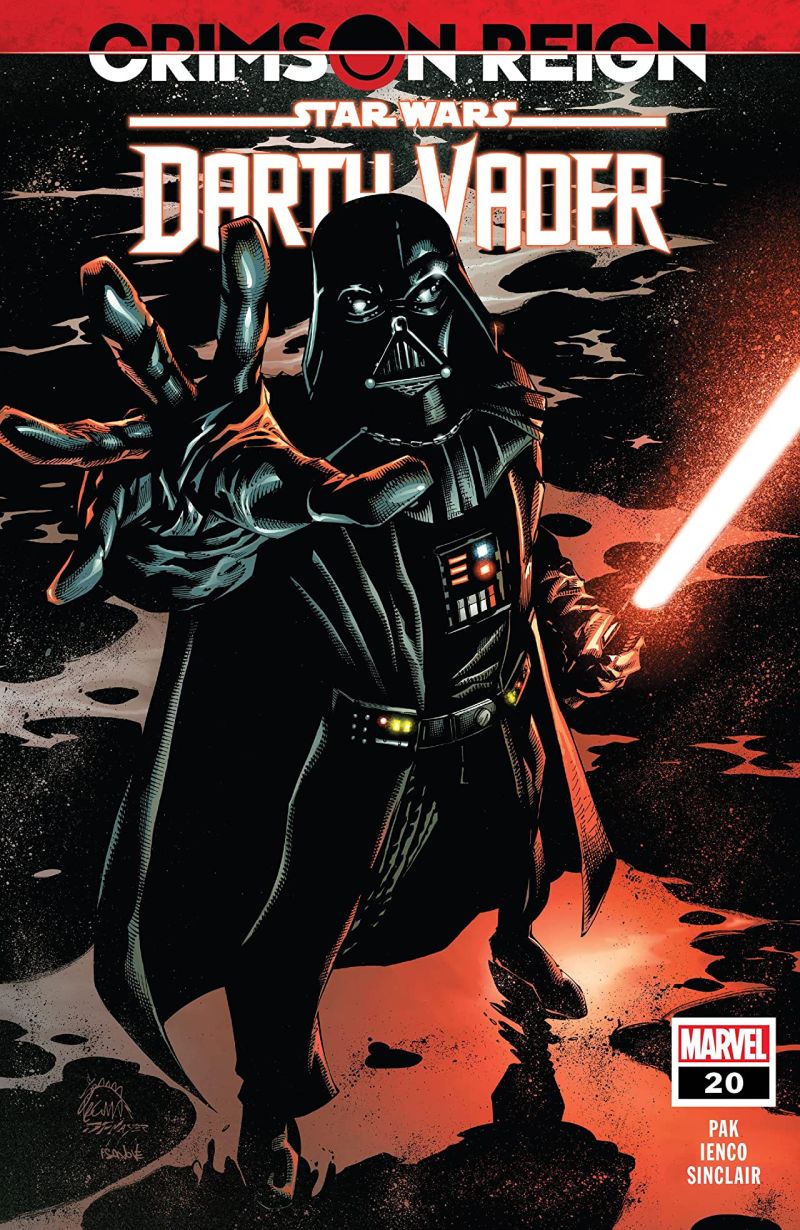 What is it ? : Former Naboo Handmaiden Sabe is on Polis Massa where Padme died, she rewatches the recording of Padme's final words, "There's still good in him", before turning to watch a mouse droid finish repairing Zed-6-7.
He reactivates and recognises her, warning her that he cannot reveal details of his mission due to programming by Vader, but she has reprogrammed him, so he tells her of Padme giving birth to Luke Skywalker, the man who destroyed the Death Star, and that the father was her bodyguard, Anakin Skywalker. With this information she believes that she can manipulate Vader since she is now allied with Crimson Dawn, something Zed-6-7 doubts, but thinks will be fun to watch.
She heads to Laecor, where we see her plant the data that Vader recovered with details of members of Crimson Dawn within the Empire.
Zed-6-7 is still remotely able to access the systems on Vader's shuttle, something which should have been disabled, but it would have been his job to do this and no-one has taken over that task. From this link he accesses their destination, Coruscant, and Sabe knows that Vader has fallen for her trick.
Bursting into the Emperors Throne Room on Coruscant, Ochi points out advisors and Royal Guardsmen to Vader who slaughters them as Palpatine watches it play out.
Troopers elsewhere are alerted that Vader is slaughtering people in the Throneroom, but before their leader can act, he is taken out along with a number of Stormtroopers by the Mercenaries that Vader had acquired.
And on the estate of Baron Epsis Zanchal, the freedom fighters who have allied themselves with Vader burst in exposing him as a Crimson Dawn collaborator, something he denies and complies with them searching for evidence, but they end up gunning him down despite finding no evidence because they see that he is feeding people to his pet Narglatch.
Back in the Throneroom, Palpatine is happy with what Vader has done, showing strength and demanding respect from the survivors, but he points out that only one of those Vader killed was Crimson Dawn, that the list is flawed. But Vader tells him he promised to bring order to the Empire, which his actions have done, and Palpatine leaves telling Vader we shall see, we shall see.
Vader heads to the estate of Baron Zanchal, and is met and thanked by the freed captives, but the strain is showing within his forces, as the Freedom fighters are realising they're working alongside paid killers, but some of killers are realising that it feels good to help people without payment sometimes.
Vader reveals to Ochi that he knew the list was a plant, but that everyone on it was an agent of Chaos, so decided to kill them anyway, telling Ochi to find out what connects everyone on the list so he can discover who planted it.
Ochi heads to Sly Moores residence to question whether it was her work planting the list, but they are interrupted and stunned by Zed-6-7 and Sabe who tells them she is now their handler, and they will comply unless they want their membership of Crimson Dawn revealed to Vader . . . .

High Points : While there's a fun bit of Vader slaughter going on in this issue, and it's good to see Vader as a powerful destructive force, there's not much going on here really. We see Sabe plant the list, Vader kills people on it even though he knows its fake, and tries to work out who is behind it.
I liked in previous issues how Crimson Dawn had become a group of the weak people in the galaxy grouping together against the powerful. That it was a unionisation of people against the Sith, but we see in this issue that basically it's almost everyone in the Emperors circle who has joined up and it doesn't really make sense. Why would Sly Moore, who has served Palpatine for 20 years turn away from him now, she can't possibly believe that their power from numbers philosophy is going to work against someone who can crush a Sumna-verminoth with ease.
But to give it some credit, Palpatine does seem to be aware of everything, and is letting it go on merely as entertainment in getting Vader to hunt down Crimson Dawn and murder them all, and that they are so far beneath him as to not be any real threat.

Low Points : While I loved Zed-6-7 as a foil to Vader, and it's fairly nice to see him back, he really doesn't work as well allied with Sabe, as he seems to know too much about her actions without being told, which should mean someone else could easily deduce them.
And while the Sabe storyline, with her following up on Padme's death is interesting, the fact that we're now in the time period between Empire and Jedi, does mean she's been waiting to investigate for 20 or so years, it really feels like a cold case investigation. If it was so important to her, should she have been looking into this many years before.

So what do you really think ? : It's an entertaining enough issue, which flips the storyline from the hunting of Crimson Dawn back towards Sabe seeking justice for Padme and Anakin, which is a more interesting tale, but because of this the Crimson Dawn storyline seems to be receiving less attention than it's due, and Crimson Reign really doesn't seem to have a whole load to do with Crimson Dawn.

Final Words : Looking at the information released for the next few issues, it all really does seem to focus on Sabe, and it might be interesting to have someone who knew Anakin before he became Vader interact with him, especially if she discovers his true identity. But so much else seems obvious, the freedom fighters are going to quickly realise that Vader's not a good guy, and then they'll die. And of course, Ochi will turn on Crimson Dawn and reveal his loyalty to Palpatine (which is probably how Palpatine knows exactly what's going on, he's infiltrated the infiltrators within his Empire). But as always we shall see, as I've often been wrong before.