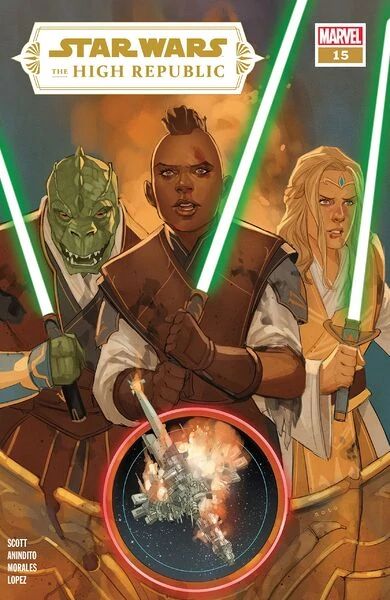 The High Republic 15: The FALL

What is it ? : The Jedi have boarded the under attack Starlight Beacon and come under instant effect of the creatures the Nihil have been using against them. Keeve Trennis is bombarded by hallucinations of creatures and spiralling colours, but through them she sees a terrifying lizard creature holding a too bright beam of energy.
As she comes to her senses, her skin cracked from being drained by the creatures, she realises it's Sskeer holding his lightsaber, his disconnection from the force has protected him from the creatures attacks, and he has killed those attacking the Jedi. Although too late for Nooranbakarakana who lies calcified and dead on the ground.
Avar Kriss leads Keeve as they must try to stop the station drifting into the planets atmosphere where it would be destroyed, and Sskeer offers to stay behind to protect them. Keeve tearfully leaves her master, knowing he'll be outnumbered and at a massive disadvantage physically without the force, but he reassures her that this is not the end and he will see her again.
Aboard the Ataraxia, Lourna Dee has escaped from her holding cell, and steals the ship by killing it's pilot and only remaining crewmember, OrbaLin.
Keeve and Kriss reach the control tower, where they find Estala Maru levitating holding the station together through the power of the force, and Avar Kriss reaches out through the Song of the Force bring the Jedi together, both fallen and still living to try to save the station. Keeve finds the near lifeless bodies of Terec and Ceret, and as a wall gives way and she begins being sucked off into space, but the twins awaken and pull her back inside.
The station impacts the atmosphere and is torn asunder and the Jedi song is broken, so Kriss urges her friend Estala to flee with her, but he refuses, telling her that she was always the guiding light, and holding the station together he uses the force to hurl her into an escape pod.
The pod launches as the remains of the station explode and then crash into the surface of the planet in a fiery ball.
Kriss climbs out of the pod on the planets surface, only to see Keeve, Ceret and Terec walking towards her through the burning wreckage of the Starlight Beacon, and she is broken by the vast number of deaths that just occurred, especially the death of her closest friend Estala Maru. Keeve holds her, while pledging to find out what the creatures were, and that this is never the end, only a beginning.

High Points : Well, that's certainly one way to end a series, with an absolute slaughter. From major characters like Sskeer, through to the many supporting characters such as Estala Maru, Nooranbakarakana, OrbaLin, KC-78 and possibly even Goonral Monshi (he is with evacuated survivors, and needs OrbaLin and the Ataraxia to rescue them, but Lourna Dee kills OrbaLin and steals the Ataraxia, so we're unsure of his status, but it kind looks like he and those he was rescuing all died), there's deaths aplenty.
The writers were definitely clearing out the cast of the comic, only keeping a few to perhaps pop up in other High Republic era stories, with Lourna Dee getting an unexplained escape as she's obviously wanted elsewhere in the canon, and Avar Kriss, Terec, Ceret and Keeve Trennis all being known enough to survive to be reused.

Sskeers illness is well used, making him immune to creatures which attack through the force, and we finally get his death we've been repeatedly promised through the run of the series.

Low Points : This ending is so rushed. When I discovered last issue that there was only one left, I wondered how they were going to wrap it all up, whether this was a planned end, or whether the title had just been cancelled. And it's so obvious that it was just cancelled, the story rushes to try to finish the current storyline with the Starlight Beacon under attack, and it does that, barely. But we've got no resolution on the whole Nihil storyline (and I'm aware that's running across multiple titles), but
the abandonment of the Drengir story to move onto the Nihil now feels especially bad. As they could have just kept that one running for a while longer, showing battles with the Drengir and the alliance with the Hutts, both of which were interesting, rather than moving onto the far more conventional story of the Nihil, which we now don't even get to see the end of.
They've tried I think to make this story instead the story of the Starlight Beacon, where the series began with its commissioning, and ending with its destruction. But the story never seemed to be about the station, although it was often their base, any more than the Prequel trilogy was a series about Coruscant.

And because it's rushed, so many of the plot points are rushed, the death of OrbaLin, which in other time would be the climactic end of an issue, is just a couple of frames. Nooranbakarakana dies unseen only to be noticed later, and we get no idea what has happened to Monshi. But most annoying to me is the deus ex machina escape of Lourna Dee, where she escapes from a holding cell, gets weapons and murders a Jedi so she can steal the hero ship, all in a couple of frames. I guess the writers were told that she really needed to be kept alive.

So what do you really think ? : I suppose at least they tried to give the story an end, although I'll be interested to hear if they pick up the storylines anywhere else and follow them up. But I think this is probably the end of Keeve Trennis, Terec and Ceret's storyline, they may crop up in crowd scenes, but their time in the spotlight is looks to be over.

We shall see if this comic series returns, or if they're just reusing the title for a fresh story, but for the moment, I'll consider this the end of this series, or at least until I discover differently in October.