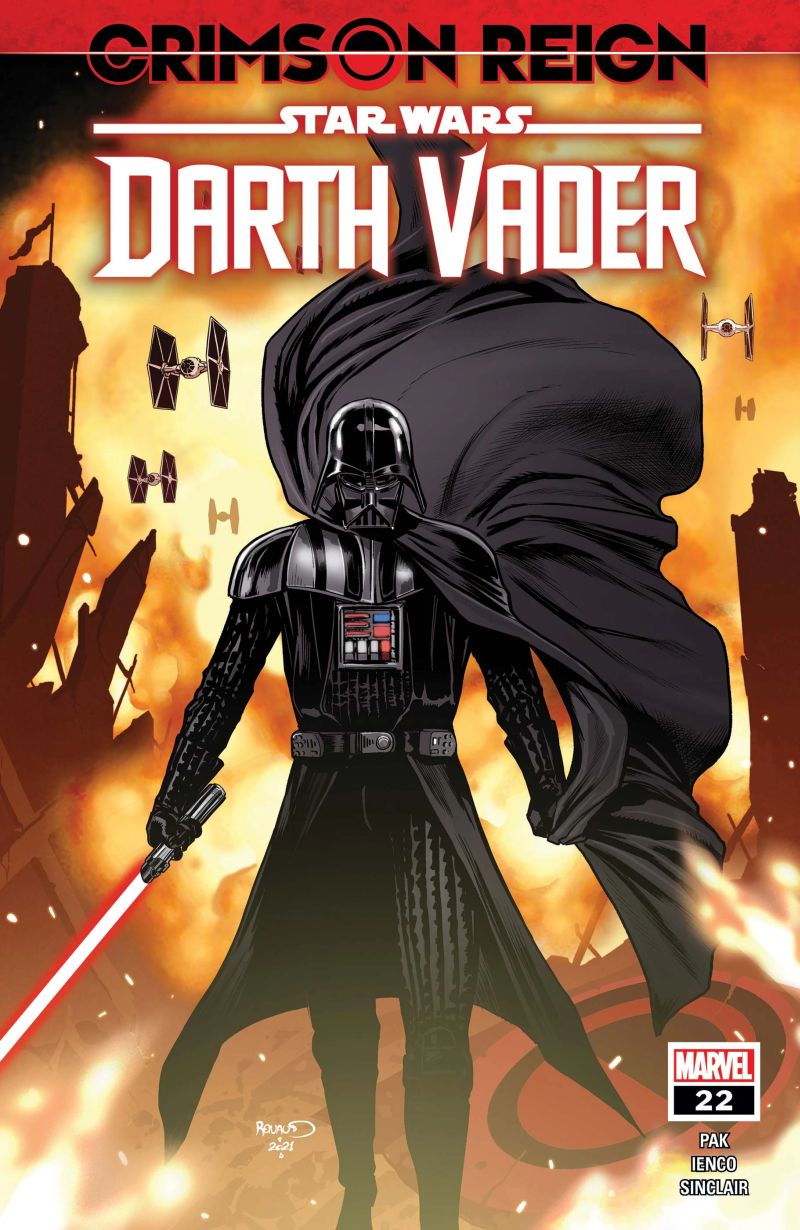 What is it ? : Vader aboard his shuttle with his new puppets Sabe, Ochi and Zed-6-7 head back to Naboo and the Sando Sea Monster Vader killed when ambushed by the Amidalans many issues ago. He dumps them on it's corpse where smaller creatures which have been scavenging it's meat turn on them and as they fight for their lives, Vader questions them.
Sabe reveals that she only infiltrated the Crimson Dawn to achieve her goal of order, and Ochi claims the same. Vader makes a point with the hordes of creatures, that with so many factions that someone must make them obey, or bring them to order, and reluctantly Sabe agrees to help, and Ochi agrees to anything which will save his life.
She takes him to a Crimson Dawn installation on the Outer Rim, and tells them that Vader rules them now, but some attack but Vaders easy defeat of them causes the others to fall in line.
Ochi meanwhile returns to General Romodi, and tells him that Vader has joined Crimson Dawn, along with what he already knew that Vader butchers many loyal troops who weren't allied with Crimson Dawn, Romodi accepts this information and dispatches his troops to deal with it.
On Oro Sankeria the Mercenaries and Revengers are waiting on Vaders orders, but come under attack by Imperial Forces under the orders of Romodi to destroy allies of Vader. This attack is just a lure for the Crimson Dawn forces to attack the Empire, and Romodi prepares to recall his now outnumbered troops. But Vader contacts him, telling him this is designed to draw out the Crimson Dawn for extermination, and the battle ends when the Dawners set off a pulse bomb killing their forces along with all of the Imperial forces.
In the aftermath Romodi questions whether this slaughter is the order the Empire is supposed to bring to the galaxy, while the Revengers question what Vader has done as Ochi tells them that Vader is not their saviour, but their nightmare.
Sabe watches along with Vader, and he asks he if nothing scares her, to which she responds, "Why would I be scared of Anakin Skywalker" . . . .

High Points : Although the story rushes along quickly not really giving any part of it time, it is well done and makes a lot of sense showing the disregard that Vader has for any forces under his command. He happily sacrifices Imperial Forces to destroy Crimson Dawn which could probably be better dealt with more easily, but he simply throws his forces into battle not caring about their fates.
And finally we get a revelation which might go somewhere really interesting, with Sabe revealing that she knows Anakin and Vader are the same person. This could lead to an exploration of Vader as Anakin, bringing the two sides together more and letting us see the compromised and sacrifices that Anakin made to stay as Vader, even against some of his own judgements. But we shall have to see whether they really dig into it, or just use it as an excuse to kill off Sabe.

Low Points : The Mercenary Assassins, and the Revengers continue to be fairly pointless. I've never really liked the way they've brought Beilert Valance back. A fairly interesting character from the Marvel comics now bares no resemblance to the original character except his backstory, we see none of his supposed hatred of Droids, or if this is after he loses that, his respect for the Rebels, especially Luke Skywalker. But despite those misgivings about the character, he's totally wasted here, for the past few issues he and the others in Vaders special team of operatives have basically just been going, "Hey maybe Vader isn't a nice guy after all", over and over again.

I've also got to question the battle on Oro Sankeria, Romodi dispatches his troops from a Super Star Destroyer, which can field 38,000 troops, 30 AT-AT's, 40 AT-ST's, and anywhere between 144, and thousands of Tie Fighters depending on load out. And these forces are apparently outnumbered by the Crimson Dawn forces they are attacked by.
The battle in no way looks like it's that large, there's perhaps a 1000 troops, with only Imperial Troop Transports for armour support, this looks like a fairly small skirmish rather than a battle on the same scale as Hoth.

So what do you really think ? : A lot happens, so I definitely enjoyed this issue more than I have for a couple of issues. But the comic just seems routine now, all of the interesting exploration of Vader as a character seems to now be forgotten, and there's no exploration of his thoughts or feelings, just using Vader as a force of nature.

Final Words : How much longer can this comic go on for? All of this is supposedly happening between The Empire Strikes Back and Return of the Jedi, a period of only one year. I feel like I'm in a marathon with this comic now, I'm sure the end is in sight, and I don't want to give up when it must be fairly near, but I'm really not enjoying it any more.