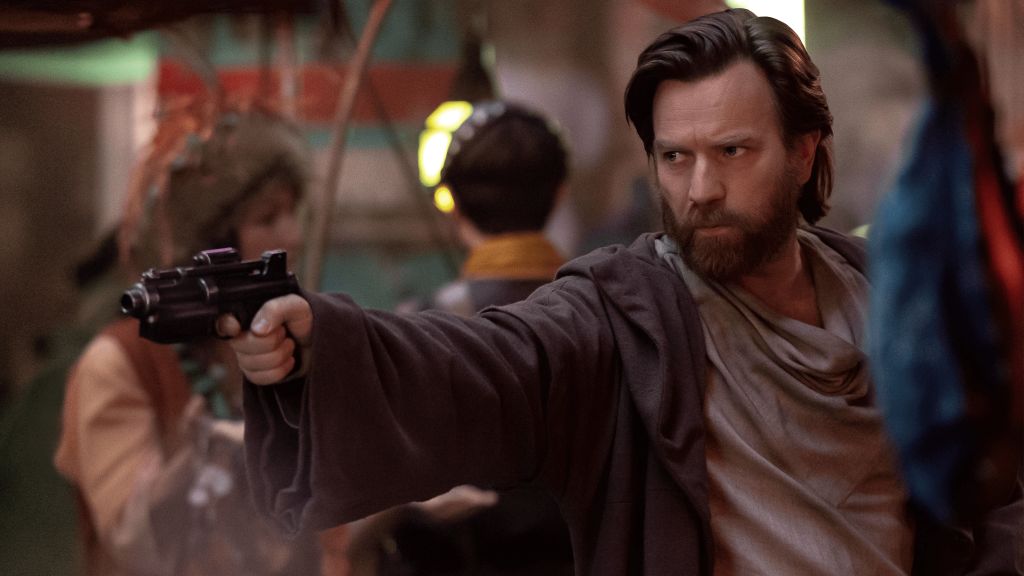 What is it ? : Obi-Wan heads to the planet of Daiyu to search for the kidnapped Leia, there he discovers that signals are jammed so no information gets in or out, meaning he cannot track her any further so he begins normal investigation. Asking around he encounters a destitute Clone Trooper, who he gives some credits to, is given a free sample of spice from a street drug dealer, before a child tells him there is a Jedi who can help him.
We see a robed figure walking into a room with a mother and child, he gestures and the window shutters close, before he sits and a device on the table lifts into his hand. He offers the mother a way off world, and when she pays him for it, he talks into a comlink and claims to use the Mind Trick to convince the guard on the other end to let the mother and child through. As they leave we see Obi-Wan watching from the shadows.
He enters and demonstrates that he knows that the Jedi's abilities were just done with remote controls and magnets, demanding to know where Leia has been taken, which the fake Jedi provides to him. Obi-Wan travels to the location and steals the clothes of a worker in the attached spice factory, and he causes a distraction to get in. He knocks some guards unconscious, but when he bursts into a jail cell he discovers only a broken droid wearing Leia's cloak and he is ambushed by the kidnappers who reveal that the Inquisitors are behind the kidnapping.
He fights with the kidnappers, before smashing the vial of spice he received earlier, and locks them in the cell with it disabling them, and quickly locates Leia in another cell. They head out into the streets, but Leia is disobedient and easily distracted as this is the first place she has been except the very safe world of Alderaan. Obi-Wan takes them to the docks, but the Inquisitors have arrived and locked them down. The Grand Inquisitor scolds the 3rd Sister about doing this, and tells her to stand down, he will capture Kenobi, but she contacts the now recovered kidnappers and get them to issue a bounty for Kenobi to drive him into the open.
Obi-Wan is attacked by a bounty hunter, and defeats him, but Leia sees the bounty on Kenobi and realises that her kidnapping was only ever to capture him, so he is responsible for her kidnapping and she runs away, heading to the rooftops.
Obi-Wan chases, but is ambushed by another Bounty Hunter, the firefight on the rooftops attracting the attention of the 3rd Sister.
Leia continues to try to flee, but falls from a rooftop, and Obi-Wan uses the force for the first time in years, to stop her falling to her death, and she gently sets down on the ground, realising that he is a Jedi, one of the legendary warriors she has been told about by her father.
As they are attacked once again by the bounty hunter from the rooftop, they are rescued by the fake Jedi, who claims to want to help them, giving them a passcard for a automated droid freighter, and contact details for someone that can help them. The fake Jedi then tries to distract the 3rd Sister as she arrives, but she easily defeats him, and then drags Obi-Wan's intended location from his mind.
In the cargo terminal, she catches up with them, and taunts Obi-Wan with the knowledge that Anakin Skywalker is now Darth Vader and still lives, while Leia sneaks into the waiting transport. But before she can get Obi-Wan, the Grand Inquisitor arrives, and after a short argument she plunges her lightsaber into his chest, which gives Obi-Wan time to slip aboard the ship which races off into the sky as the 3rd Sister shouts that she will catch him.
Obi-Wan senses a disturbance in the force and exclaims Anakin, while across the galaxy an unarmoured Darth Vader opens his eyes within his bacta tank. . . .

High Points : After the last episode was a little slow in places, this episode rushes by with action and loads of tension. It's a tight story, with Obi-Wan trying to sneak around without drawing attention as the Inquisitors trap closes around him.
The fake Jedi, played by Kumail Nanjiani is excellent, played somewhat as a comic character, but becoming a possible ally by the end, we are unsure of his motivations, and whether the information he gave Obi-Wan is real or just luring him into a different trap.
The setting is interesting, as in the past we've had Desert Worlds, Ice Worlds, Jungle Worlds, and this time we've got a Cyberpunk World. It looks decent, but almost cheap compared to the excellent visualisation of Alderaan and Tatooine last episode.

Low Points : The 3rd Sister isn't as much of a threat as I think the writers think she is, and I have to admit I was waiting for a twist where she would confront Obi-Wan, only to be easily dispatched, as he is just too powerful for her (after all this is the guy who can fight Vader to a standstill, and she is just an Inquisitor). I'm also curious as to why every other Inquisitor and Sith are deformed by the Dark Side, but she is totally normal, again making me think that she just isn't very powerful.

Leia is done fairly well, but borders on being annoying in this episode, her disobedience and disbelief in Obi-Wan begins to grate very quickly, hopefully this is now over as she knows he is a Jedi, but if it continues I'm not going to like this version of Leia very much.

So what do you really think ? : A solid second episode, and while faster paced, I didn't feel quite as Star Wars as the first episode, looking like it was done on a budget (there's not much which can make sneaking through a side alley look Star Wars, rather than just normal, and there's a lot of sneaking through side alleys in this episode).
There are elements of this episode which I preferred to the first, but I think I enjoyed the first episode more, and to a degree that was down to how much Leia irritated me rather than anything storywise or sfx wise.

Final Words : I always expect first episodes to be a bit weak, as they've got a lot of setting the scene to do. But therefore I expected more of this episode, and while it was good, it wasn't better than the first, it did feel like it was treading water somewhat to keep them on the same world for the run time of the episode, but otherwise was an enjoyable watch, and I'm looking forward to seeing where this story goes.