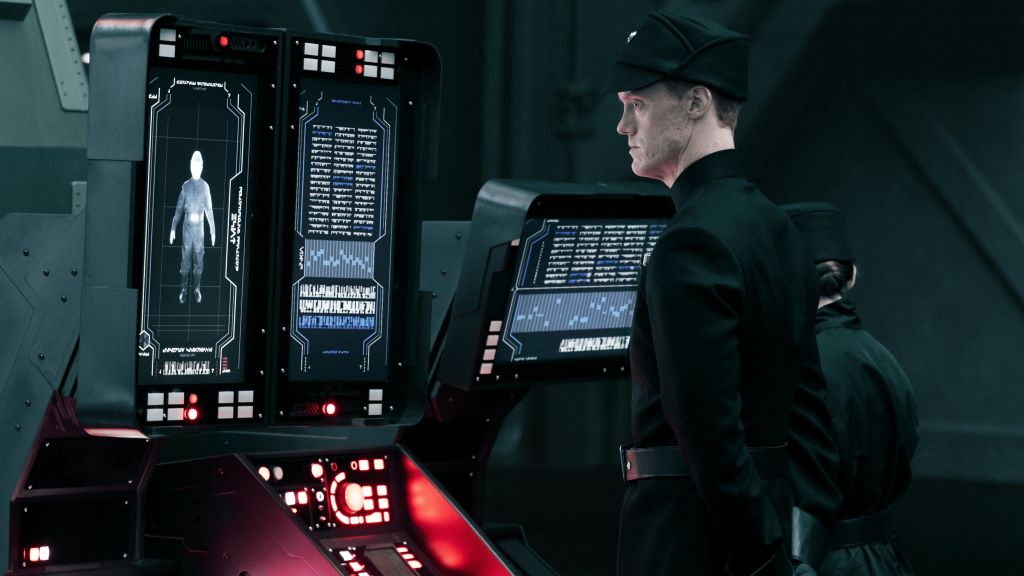 What is it ? : Obi-Wan awakens in a Bacta tank, and the image flashes between him recovering from his burns, to Vader in his. Obi-Wan panics and begins climbing out of the tank, where Tala tells him he needs to heal, but he asks after Leia.
We see Leia in the Inquisitors Citadel in an interrogation chamber, Reva enters and tells Leia that the Empire does not tolerate Jedi sympathisers, and that Obi-Wan is dead.
When they reach their destination, Obi-Wan asks the leader of the underground movement which has been rescuing Jedi for help saving Leia, they tell him that she is in the Citadel, and although reluctant, because he has personal experience with the inquisitors taking his spouse he decides to help.
Tala again disguises herself as an Imperial Officer, and takes a shuttle to the Citadel, where Obi-Wan swims in through the surrounding sea. Tala bluffs her way through a check point, and finds a terminal where she begins guiding Obi-Wan through the Citadel towards the interrogation chambers.
During her interrogation by Reva, Leia attempts to get her droid to help, but Reva easily catches it, and trying to convince her to tell where the underground are based, telling her these are the same people who left Obi-Wan to die.
Tala is noticed, and dispatches a superior officer who queries her identity, while Obi-Wan sneaks past Stormtroopers using the same trick he used to distract Stormtroopers aboard the Death Star. When he reaches the secure area, they discover why the Citadel is so enormous, contained within it are the bodies of all of the Jedi, including the Younglings, it is an enormous tomb.
Reva decides to torture Leia after the young girl resists her mind tricks and attempts to trick the Inquisitor, and has Stormtroopers take her to the same torture chamber we saw in Star Wars: Jedi: Fallen Order.
Arriving, Obi-Wan tells Tala he needs a distraction, and she summons Reva claiming to have information on the underground and their location. Reva leaves Leia, and goes to question Tala, unsure if she is spying for or against the Empire.
Obi-Wan rescues Leia, taking out the guards by putting out the lights and using his lightsaber from the darkness. Sneaking out, they are spotted by a Probe Droid which sets off alarms, and Reva has Tala arrested and heads to deal with Obi-Wan, but Tala overwhelms her guards and escapes.
In the tunnels underwater, Leia and Obi-Wan are attacked by Stormtroopers and Death Troopers, but Obi-Wan easily parries their blaster bolts, reflecting them back and taking out these troopers. When Tala catches up with them however, one of the blaster bolts cracks one of the windows, and Obi-Wan holds it back with the force, as he covers for Tala and Leia retreating against the coming Troopers. Once the two are in relative safety, he lets the water rush in and charges forwards as Tala closes the doors, he slips through and through the window they can see the dead troopers floating in the sea.
Obi-Wan disguises himself in a long coat, with Leia huddled inside it with him, and they try to reach their shuttle to leave, but Reva catches up with them realising they plan to escape. As Stormtroopers surround them, two T-47 Airspeeders, as used on Hoth, swoop in and scatter the troopers. One of the Airspeeders drops and allows Obi-Wan, Tala and Leia to board it, while the other occupies Reva by shooting at her.
As they escape, Reva uses the force to throw a cargo container at the second Airspeeder, destroying it, while the first with Leia, Tala and Obi-Wan aboard escapes.
Reva is summoned by Vader, who angrily begins to force choke her, but she reveals that she has planted a tracker aboard the Airspeeder and will soon locate their base. Vader calms down and lets her live.
The Airspeeder arrives at a starship, and safe for now, and with the danger past, Leia reaches for Obi-Wans hand for reassurance as her droid activates revealing to the view it is the tracker. . . .

High Points : It's great to see Obi-Wan back in action, he begins using the Force during this episode, and while still far from his peak, he easily takes out Stormtroopers, and is using the same move of parrying blaster bolts back at enemies that he and Qui-Gon used against Battle Droids in The Phantom Menace.
The scene where Vader is enraged by Obi-Wan escaping from the Citadel is brilliant, his anger against Reva is incredible and he is dangerous and scary exactly the way Vader should be. Although I was kind of sad that this wasn't end of Reva, and he so casually kills people both before and after this, yet holds out because she wants to tell him something, and then lets her live even though she obviously failed.

Low Points : When Obi-Wan discovers the bodies of the Jedi entombed within the Citadel, on display like trophies. I expected something more, perhaps someone we recognised, or a point to be made about the Inquisitors having even the bodies of Youngling Jedi on display. But there wasn't anything, and when I felt could have been a fairly emotional scene instead just fell a little flat.

Also, when Reva tells Vader that she has planted a tracking bug aboard the Airspeeder, I was instantly sceptical, as she obviously had been otherwise occupied by the second Airspeeder blasting at her. But I almost immediately realised that it must be the droid, as she had handled it when she was interrogating Leia, so the big reveal that it was indeed the droid seemed a weak moment to end the episode on. But it also makes me question, since when are prisoners allowed to keep their equipment and small droids when they're being tortured? Leia doesn't recover the droid as they escape, but seemingly has it all along.
The only explanation being that Reva planned for Obi-Wan to get away all along, which seems a little too like the Millennium Falcons escape from the Death Star. Are they saying this is where Vader learned that trick?

So what do you really think ? : Action packed and very enjoyable, but it does stretch credibility that this most secure of Imperial bases is penetrated and then escaped from so easily.

Final Words : While I'm enjoying this series very much, when it started I expected it to have something more to show me, and while there's nothing wrong with what they're doing, there hasn't been a moment which has really made the series a triumph.
While it's interesting to see Obi-Wan developing a connection of Leia, rather than Luke, the twin he is supposedly the guardian of, I'm not totally convinced this is a story we needed. Fun, but with a sense of pointlessness.