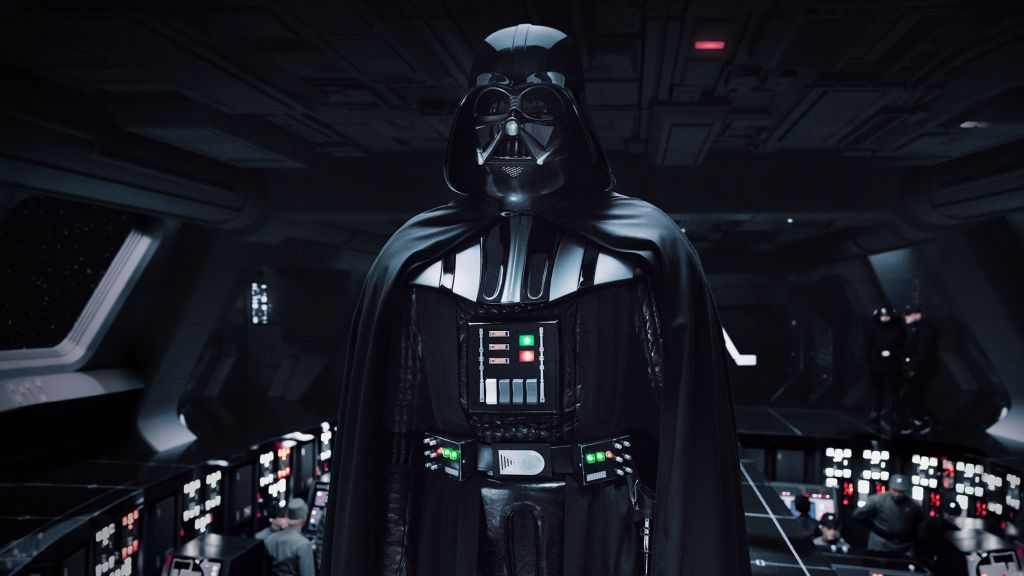 What is it ? : The entire episode cuts between a framing scene where Obi-Wan and Anakin train against each other in a court on Coruscant, their duel echoes the episode showing the knowledge Obi-Wan has of Anakin and his weaknesses. The cutting between the action and this duel happens so often, that I won't follow it as I cover the plot.
On the bridge of his Star Destroyer, the Third Sister Reva informs Vader that she has tracked Obi-Wan to Jabiim, and Vader promotes her to Grand Inquisitor.
Meanwhile on Jabiim Obi-Wan, Leia and Tala arrive back from rescuing Leia, and Sully shows them the number of refugees awaiting a path out of the refuge, and Obi-Wan promises to help where he can.
Leia's droid Lola actives with the programming that Reva has put into it, and it sabotages the hangar doors, locking their ships inside, just as they detect a Star Destroyer emerging into orbit above them.
Obi-Wan organises the defence while he asks them to trust Leia to help override the doors to let their ships escape. Outside a number of shuttles land, and a large number of Stormtroopers disembark, and Reva orders them to use heavy weapons against the blast doors into the hangar.
Obi-Wan tries to delay Reva by talking with her, and discovers that she was a youngling, and that all of this is part of her plan to get close to Vader. When she was young, she thought that Anakin was coming to rescue her during Order 66, and when he slaughtered those around her she played dead among the bodies of her Jedi "family". Obi-Wan offers to help, but she refuses, cutting through the blast door with her lightsaber, and a small battle happens in the entryway, before they retreat into the hangar itself, closing the blast doors there as well. However, Tala is wounded, and dies along with her droid in defence of those inside.
To give them time to escape, Obi-Wan surrenders himself to Reva, and when she tells him that she is bringing Vader, he responds that no, he is bringing Vader to her, for her revenge.
He slips away, and Leia overrides the doors discovering Lola, and freeing her from Reva's control, allowing the ships to prepare to leave. But Vader arrives, and breaks into the hangar as the ship lifts free. Vader holds in there using the force, before smashing it to the ground. He begins tearing it's hull apart, only for the other ship to lift off and escape while he is distracted by the empty starship.
Reva also tries to take advantage of this distraction, trying to strike Vader down from behind, but he responds instantly holding her in place with the force. He tells her he always expected this, her anger at him was useful and they have been manipulating her. They fight, but Reva is easily overwhelmed by Vader who takes her weapon from her, allowing her to use only half of it, before taking that from her as well.
His saber stabs deep into her and she collapses, only for the Grand Inquisitor to emerge, telling her that they've always been using her, and they will leave her where they found her, in the gutter.
As they leave her lying there, she crawls over to where Obi-Wan's communicator has been dropped, it is damaged but replays some of Bail Organa's messages to him, and she discovers that Anakin has a son on Tatooine in the care of Owen who she confronted in an earlier episode.
Obi-Wan senses something happening as he sits on the fleeing transport, and on Tatooine, Luke sleeps peacefully in his bed on the Lars homestead. . . .

High Points : Wow this is a great episode, even though Hayden Christensen looks a little different (I think his mouth has changed shape) even through the digital de-aging, the framing training session between Obi-Wan and Anakin is great. Being used to highlight that Obi-Wan knows Anakin so well, and can help manipulate him, even down to offering him a target for his rage so the other ship can slip away while he is distracted.
We also finally get motivation for Reva, and it's amazingly well done. She is doing all of this to get revenge on Anakin, who she thought was a rescuer when she was a child on the day of Order 66, but he instead slaughtered her friends. But more than this, she herself has been manipulated by the Grand Inquisitor and Vader, letting this rage lead her to service of the Dark Side even if she thought she was striking against it.
And finally, Vader himself is just awesome, as he viciously tears the ship he thinks Obi-Wan is aboard into pieces using the force, through to him toying with Reva as she attacks him. He is in no danger, but lets her take her attempt on his life, before just swatting her aside as the insignificant being she is compared to him.

Low Points : My only problems with this episode come at the end, why does Vader and the Grand Inquisitor leave Reva alive when they leave (unless they are going to follow her), back in the day they slaughtered all force users, no matter how insignificant, but to make her feel bad they let her live?
Also the communicator is just such an obvious point, from when we see it dropped, through to when it conveniently plays just the information about Luke and his location, it just seems as if it's there to extend this story one more episode. Which is annoying, because it's been so well put together until now.

So what do you really think ? : I've heard rumours that they're planning a Reva spin off series, which I thought was a clever piece of misinformation as I thought she was going to die at Vaders hands at the climax of this episode. But it looks as if this may very well be their plan. Which is doubly annoying, as I think this has been her tale as much as Obi-Wan's, and it's complete, and doesn't need any unnecessary extension. But also because the character of Tala I found more interesting, an Imperial officer who turns on the Empire, because while she believed they were bringing order, she was first hand forced to take part in the slaughter they commit to bring about that order. Someone who wants to redeem themselves, but doesn't necessarily disagree with the Empires final goals. Although some of that story obviously overlaps with the upcoming Andor series about a character working towards redemption.

Final Words : I've mentioned in previous reviews that while I was loving this series, I was disappointed as I was expecting something more. Well they gave me that something, and now my only worry is that there's still one episode to go, and they may have peaked already.