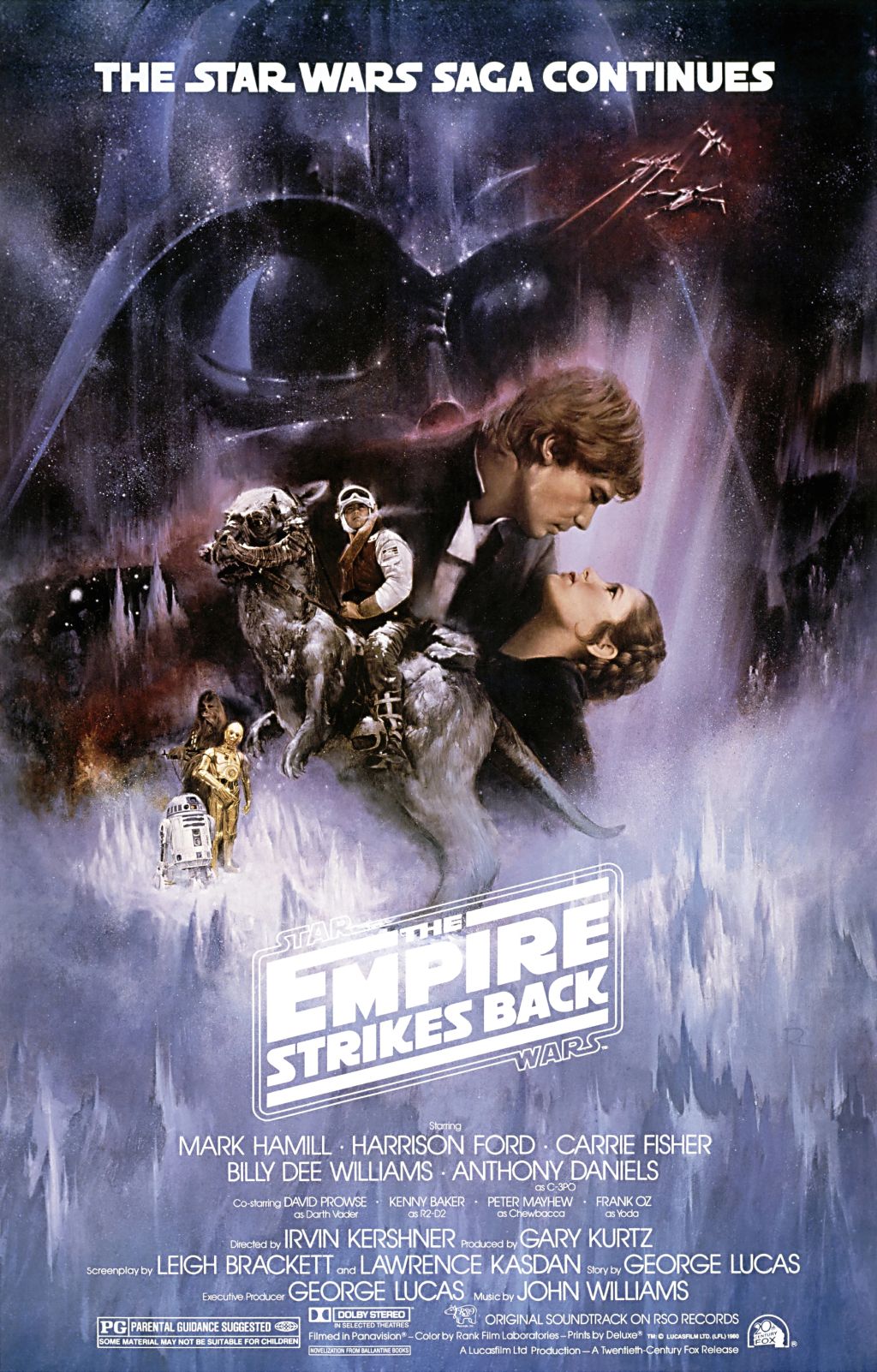 What is it ? : The Rebellion has taken refuge on the ice world of Hoth, Luke and Han are out placing beacons and scouting, when Luke is attacked by a Wampa, a large hairy beast native to this planet. He escapes through use of the force, but before he collapses with exhaustion, he sees a ghostlike image of Obi-Wan Kenobi who tells him to go to Dagobah and seek out instruction from Obi-Wan's master Yoda.
When Luke does arrive back, Han goes out alone riding a Tauntaun, but the intense cold causes it to collapse just as they find Luke. They camp down for the night, before being rescued by Rebel Snowspeeders adapted to use here, but as Luke recovers back at the base they are detected by an Imperial Probe Droid who lets the Empire know where they are.
The Rebels begin evacuating the base, but an Imperial Armada arrives, and Luke joins other pilots including Wedge in defending the base against the massive Imperial Walkers sent to attack. Luke comes up with a tactic of using the Snowspeeders towing cables to entangle the legs of the Walkers causing them to trip and fall, which delays the assault long enough for most of the Rebels to escape, with Luke fleeing in his X-Wing, but in space instead of heading to rendezvous with the rest of the Rebels, he heads instead to Dagobah to meet Yoda.
Han helps Leia escape from the base in the Millennium Falcon, but it's hyperdrive is malfunctioning and they evade the pursuing forces by entering an asteroid field. Outpiloting the Tie Fighters following them, Han hides the ship inside a large asteroid so they can repair the ship. But they discover that the cave they have hidden in is actually the mouth of a massive creature.
Fleeing the creature they once again are attacked by the Imperial forces seeking them, but evade once more by hiding the ship inside the refuse dumped by the Imperial ships. When they reactive the ship, they head for Bespin, where an old friend of Han's will likely help repair the ship, but unseen by them they are followed by a bounty hunter, Boba Fett, hired by Darth Vader to locate them.
Luke arrives at Dagobah, a swampy world, and meets an annoying creature who speaks in an oddly mixed up fashion, who claims to know Yoda. But the delay frustrates Luke, who then overhears the creature speaking to the ghost of Obi-Wan explaining that Luke lacks the patience to become a Jedi, and Luke realises this is in fact Yoda. He begs to be trained, and Yoda gives in and begins teaching him the ways of the force, leading to a confrontation in a cave where Luke senses the Dark Side. Yoda advises him to take nothing into the cave, but Luke takes his Lightsaber, and more importantly his fears. Inside he sees Vader, and fights and defeats him, revealing inside the helmet is Lukes face.
Han and Leia arrive at Bespin, a floating city in the clouds mining gas from the surrounding atmosphere where they meet Hans old friend Lando Calrissian, who firstly acts offended by Han, but then becomes friendly. He agrees to help, but then a trap is triggered on them, because Darth Vader already awaits them here, as Lando explains that the Empire arrived just before them.
Han is tortured, but then they discover that Vader actually seeks Luke and they are simply the bait to lure him here. Vader intends to use carbonite to freeze Luke for transport to the Emperor, but they needs to test the system, and Han is frozen inside a block of solid metal.
On Dagobah, Luke has visions of his friends in danger, and wants to rush to their rescue, but Yoda warns him he is not yet ready, he ignore the advice and leaves in his X-Wing. As he leaves, Yoda and Obi-Wan watch, and mention that Luke may not be their only hope, as there is another.
Arriving at Dagobah, Luke sees Leia and the frozen Han being escorted through the city by Lando and Boba Fett, but under blaster fire he loses them and ends up in the carbonite freezing chamber where Vader awaits him and they ignite their lightsabers and clash.
Lando frees Leia explaining that he had no choice but to help the Empire, but if they act quickly they can save Han, but as they arrive at Fetts ship, he flies off with the carbon frozen Han in his cargo bay.
They retreat to the Millennium Falcon meeting up with R2-D2 who was with Luke but got seperated, and they flee the station after Lando orders a retreat and R2 unlocks the door.
Vader easily outmatches Luke cutting off his hand, but offers him the chance to join him on the Dark Side, but Luke refuses to help the man who killed his father, but Vader reveals that he is Lukes father. Luke refuses to believe, leaping from the platforms they were on, and ending up dangling from the bottom of the city high above the clouds.
Leia sense Luke calling out in pain, and they turn the Falcon and collect him from the bottom of the station. But when they try to jump to Hyperspace they discover the ship is still malfunctioning. But R2 reveals that while connected to the cities computer unlocking the door, he discovered that the ship was purposely sabotaged, and he fixes the Hyperdrive allowing them to escape.
Aboard a Rebel Medical Frigate, Luke is given a cybernetic hand, and he and Leia watch as Lando and Chewbacca take the Falcon to try to rescue Han before Boba Fett delivers him to Jabba the Hutt on Tatooine. . . .

High Points : Well, lets just start with the moment that so many have tried to imitate, but never managed to match, the shocking "I am your father" moment. It took our collective breaths away, Darth Vader, who'd killed Ben Kenobi, who'd just been torturing Han Solo, turns out to by Luke's father ! ! And offers to rule the galaxy with him as Father and Son. One moment, which took Star Wars from being just amazing action movies, to being completely mind blowing.
But there's also the "There is another" moment between Obi-Wan and Yoda, which kept us talking until Return of the Jedi came out. I personally was convinced that it was Han they were talking about, as he used Luke's lightsaber when they are together on Hoth, and we didn't know whether anyone not a Jedi could use a lightsaber at that point.
I personally find it quite interesting that this movie is kind of back to front compared to most action movies, since the invasion of Hoth happens fairly close to the beginning of the movie, and the rest is about them escaping (rather than building up to a big battle as most movies do).
And there's so much else, it introduces AT-AT walkers, we see different types of Stormtroopers (Snow Troopers), Lando joins the heroes (even if we do distrust him initially), and we see Boba Fett as a new and cool villain. The Star Wars universe seemed full and expansive from the first movie, but this just kept it looking larger and more interesting.

Low Points : How could I bring myself to criticise what is generally considered the best Star Wars movie, it's everything we could have wanted from a sequel, it looked great, was exciting, and shocking, and blew us away with how good it could actually be.
I suppose I could try to pick silly faults, like the Giant Space Slug whose mouth the Falcon lands in, is pretty massive and must have eaten a lot to grow that large, but it doesn't eat the Mynocks which live in it's mouth, instead seeming only eating Starships which land there instead. Which doesn't seem like much of a diet (and if it actually eats minerals from the Asteroids, then surely it's mouth was facing in the wrong direction?) But really, does anything like that really matter, not to me when I'm having such a good time watching a movie.

So what do you really think ? : I adore this movie, although it's not always my favourite Star Wars movie as many people say it is theirs. Depending on my mood, I can prefer the original, or Return of the Jedi at times, but the three original movies there's not much to choose between as they're all great.

Final Words : In my attempt to make the summary above as brief as possible, I found it strange that I've skipped over C-3PO and Chewbacca almost completely as characters. I had to include R2-D2 in it, because he is the one who knows the Falcon has been sabotaged at the end, but this movie really does focus on the three lead characters more closely than the other movies. Han, Leia and Luke are who are important and the movie really knows that keeping us with what we should care about.