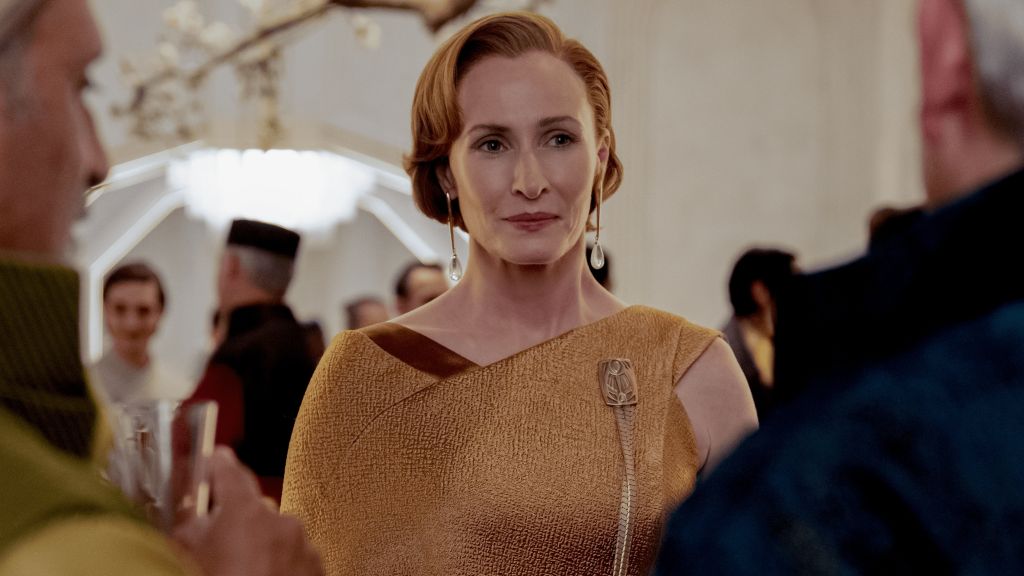 What is it ? : Andor is taken to a prison factory on Narkina 5, the prison is secured by systems in the floors so all prisoners go barefoot, and the guards wear specialised boots to protect them. Prisoners are expected to work, and are all competing against one another, each room competes against the others, and each table competes against the others in its room. Although all prisoners get as much food and water as they want, and the cells are clean and fairly comfortable, the winners get flavour in their food, and the losers get shocked.
One prisoner warns Andor to ignore the indicator in his cell which tells him how much of his sentence remains, as new legislation always increases it, and they will never be released, and the other prisoners are surprised that the changes in legislation are not known or cared about outside the prison. Later the same prisoner having lost all hope, kills himself using the security system keeping them in their cells each night.
Meanwhile on Ferrix, Andor's adoptive mother is weak and possibly near death, his old friends are watching over her, and reach out to Luthen to try to locate Andor. But unknown to them, they are being watched by Vel and Cinta from Aldhani trying to track and kill Andor for his actions after the heist.
On Coruscant, Luthen listens to the communications, but is talked into ignoring them, before he leaves to visit Saw Gerrera. He attempts to get Saw to work with another team of Rebels, offering him equipment he needs, but Saw refuses as he doesn't trust the other Rebels.
Mon Mothma mingles at a party, speaking with people as she attempts to get political support for blocking policies of Palpatine, but the majority of attendees feel safer under these policies, and detached from their negative effects. Behind the scenes she continues to work on getting funding for Rebel activities.
Supervisor Meero presents her information to the heads of the ISB including Major Partagaz and Wullf Yularen, revealing to them that the petty crimes they are seeing across the galaxy have a method behind them to provide equipment and resources to the Rebels who are seemingly becoming organised into a unified force.
Syril Karn is brought in for interrogation as he has been using his position to search for Cassian Andor, and Meero discovers how much of a cover up really happened about the situation on Ferrix, warning Syril that if he continues to search for Andor there will be repercussions. She heads to Ferrix afterwards, and Andor's friend Bix is arrested and taken in for interrogation by Meero. . . .

High Points : The acting continues to be absolutely stellar, with the scenes between Stellan SkarsgĂĄrd and Forrest Whittaker being absolutely amazing, with each accusing the other of being behind the events on Aldhani while trying to manipulate the other.
Genevieve O'Reilly and Ben Miles are hugely watchable as politicians working agains the Empire while keeping up the veneer of respectability.
And the prisoners on Narkina 5 along with Andor are all amazing, with Andy Serkis playing the head prisoner organising the others, but equally amazing is Christopher Fairbank, who without having many lines manages to draw the attention. I'm sure there something going on with his character, he seems on the edge of exhaustion and probably being worked to death in the prison, but we aren't told any of that, so I wonder if anything will actually be made of it. Christopher Fairbank is probably one of those actors you know, without knowing his name, he is famous in the UK for being one of the main actors in Auf Weidersen Pet, a popular series of the 80's and 90's. He has over the years also appeared in Doctor Who, Outlander, Guardians of the Galaxy, Invasion Earth (a personal favourite), Space Precinct, Alien3, The Fifth Element, Batman (1989), Sapphire and Steel, and loads of British TV. Although I can't find any Star Trek, so he's not a triple threat

So what do you really think ? : I really expected some progress on getting Andor out of the prison this episode, even if it was just Luthen or Vel discovering where he was. So we're really where we were at the end of last episode.
Don't get me wrong, there's plenty of things happening, just few of them seem related to the main plot of getting Andor into the Rebel Alliance.

Final Words : We were promised in this series, "The Rebellion Begins", but it's taking its sweet time about it.
Going by the three episode segments the series has shown us so far, with the escape from Ferrix, and the Heist on Aldhani coming in episodes 3 and 6 respectively, we can expect some action next weeks episode (9), but there's nothing to indicate a lead into that from this weeks episode, so perhaps a breakout, or to break the pattern the series has lulled us into believing, perhaps a failed breakout, leading to the real one at the end of the season?