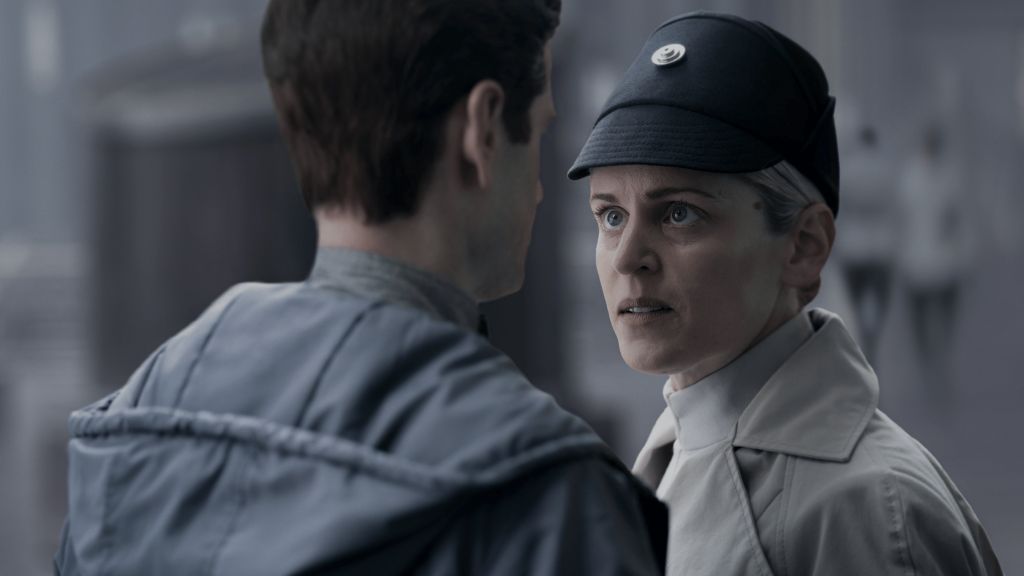 What is it ? : Bix is interrogated by Meero, who knows she's been in communication with a Rebel contact that she thinks is behind everything, and that Andor is connected with all of this. Bix refuses to speak, so Meero allows a scientist to interrogate her, this is done by playing the death screams of a race that the Empire exterminated, the screams have severe psychological effects on humans, driving them to suicide.
Andor continues in his routine in the prison, he presses his shift leader, Kino Loy for information on the guards, but he refuses to do anything because he is due to be released in 120 days, so doesn't want to endanger that. The entire facility suffers from a lockdown, and they hear rumours that it is something which happened on level 2.
On her way to present her findings to Partagaz, Meero is intercepted outside by Syril Karn, who has been promoted due to his service to the Empire, he thanks her and insists the two have a connection because they understand the danger that Andor presents, but she is repulsed by his affection ordering him to stay away. At the meeting she reveals that they have captured a Rebel pilot, and under interrogation he has told them of the next Rebel mission. She has the pilot killed and planted aboard his ship to make it look like he died in an accident to conceal the fact that the Empire knows the plan.
Mon Mothma speaks in the senate to fight another of Palpatines grabs of power, but she is voted down, and returning home she discovers her cousin is visiting. Her cousin turns out to be Vel Sartha, who led the heist on Aldhani, and they discuss their efforts in secret and the dangers they both face. Later she meets with the banker, Tay Kolma, who reveals that some of the money she contributed to the Rebellion early on is easily traceable to her accounts if she is audited, which is just a matter of time. She needs to fill the gap in her accounts with 400,000 credits, but the only suggestion he has to help her out is a criminal, something Mon Mothma is reluctant to get involved with.
In the prison, the eldest member of the work team, Ulaf, collapses on his way back from work, and Andor and Kino Loy stay with him while a medic comes. They push the medic to get Ulaf back on his feet as he only has 40 days left on his sentence, but the medic says it is pointless and puts Ulaf to sleep, killing him. When pressed as to why it was pointless to keep Ulaf alive, the medic tells them that the trouble on level 2 was because a prisoner who had been supposedly released was returned to the same level and recognised, revealing that no one is ever released. The workers rioted, and the Empire executed them all.
Andor pushes Kino Loy for information about the number of guards again, and now knowing he has nothing to lose and will never be released, Kino tells him that there are never more than 12 guards per level. . .

High Points : The scene with the death of Ulaf, and the reveal of what happened on level 2 is absolutely amazing, it tears at your heart the way they put Christopher Fairbanks character to death like a sick dog, and the dark secret behind the prison is a brilliant climax to the episode, even if it doesn't make too much sense (see below).
Syril Karn has become incredibly creepy and stalkerish in his pursuit of Meero, in a totally unexpected and riveting performance, I honestly have no idea where his story is going to go, and that is a wonderful thing.
And Meero's scenes, especially with Partagaz, but the way her entire team is coming together. They're working for the evil Empire, but they're doing quality work and believe they are doing what is best for the galaxy, and these officers, "just doing their duty" and perhaps the most believable characters we've ever seen working for the Empire, and are making this series one of the darkest visions of the Star Wars universe. Without cackling villians, without Dark Side excuses, just people working to enslave the galaxy, putting together reports and making the system which keeps people imprisoned efficient, and the executions as organised as possible.

Low Points : So, the big reveal is that a prisoner who was "released" was put back into the same section, and everyone there realised that no-one actually gets released, so the Empire slaughtered them all to stop the secret getting out.
But, they don't actually stop the prisoners talking to one another. So why has no other prisoner when they've been put into a different section turned around and told his fellow prisoners that he used to be in a different section and the countdown clock everyone has to their release isn't actually real?
The entire secrecy of this seems to be based on prisoners when they find out they don't get released, they just get moved, deciding to not let anyone else know!
"I'm going to be a prisoner forever and this countdown clock means nothing. Oh well, that's not something anyone else in this prison would want to know. Back to work."
It's a great reveal, but makes not one iota of sense.

So what do you really think ? : It's a really tense episode, with the danger that Mon Mothma is in building, and Andor's situation becoming clear. Along with some great team work from the Imperial Security Bureau, making you almost on their side as they go along.
This combined with continuing fantastic acting, Christopher Fairbank, Andy Serkis, Genevieve O'Reilly, Ben Miles, Denise Gough, and Anton Lesser all being absolutely amazing to watch.
It's great to watch, and we make some progress in the storyline, Mon Mothma is going to have to get involved with Criminals to cover her activities with the equally criminal Rebellion, even though she looks down on those she's going to have to rely on. Andor is making progress in getting out of prison, and the Imperial investigations are actually leading somewhere, probably towards Luthen's involvement galaxywide.
It's wonderful when all these elements get together with a story which is actually going somewhere rather than just treading water.

Final Words : With three episodes to go, I've got a feeling that the end of this first season isn't going to be totally triumphant, we'll get Andor escaping, and his freedom will be the victory we go out on, but I have a feeling that things aren't going to go as well for Mon Mothma and Luthen, and they will have big Imperial problems by the end of the season. But lets see.