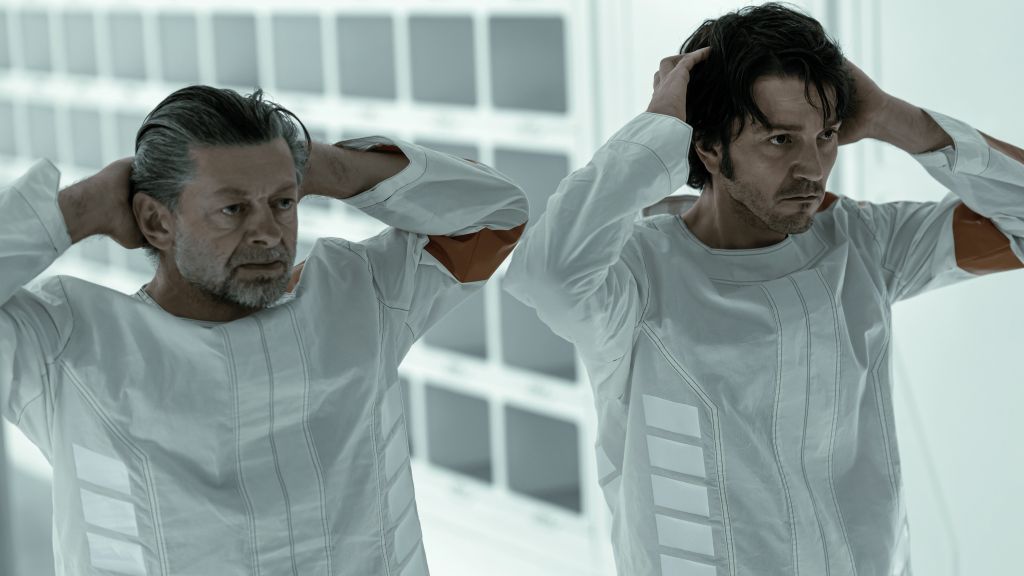 What is it ? : The news about the prisoners never getting released spreads through the prison population, and Andor pushes his escape attempt to the next day informing Kino Loy. Telling him that the attempt is based around when a new prisoner is brought in, so the replacement for the deceased Ulaf will arrive, and that the Empire will increase security soon as they'll be aware the news is spreading.
The Imperial Security Bureau have a meeting, about the interrogated pilot, and issue orders to investigate his death as normal to keep the pretence that nothing unusual is happening. On Ferrix Andors step-mother is not taking her medicine, and Andor's friends still cannot contact him. And on Coruscant, Mon Mothma meets with Davo Sculdun about a loan to conceal her transfers to the Rebellion, but his price is an arranged marriage between his son and her daughter, something Mon Mothma refuses out of hand.
When the new prisoner is brought in the next day, Andor sabotages the water system to flood the floor, so when the security system is activated as their riot begins, the floor shorts out cutting power to the prison. Grabbing weapons, and overwhelming the guards, Andor leads the prisoners in releasing more and more rooms, as they spread through the facility. Capturing the control room, they shut down power generation, and flee to the exits. But as the prisoner dive into the sea to escape, Kino Loy reveals he cannot swim, but the tide of prisoners push Andor over the edge into the sea leaving him behind.
On Coruscant, Luthen is told by his assistant that marks have been left to arrange a meeting with a contact, and it is revealed that the contact is Dedra Meero's assistant, Jung. He has been working for Luthen, but wants to quit, both working for Luthen and his position in the Empire, as he now has a family and doesn't want to risk them. He offers information about the captured pilot, the investigations of Aldhani and Ferrix, in exchange for being allowed to quit. But Luthen tells him that he is a hero of the Rebellion and his sacrifice is recognised, and Jung questions what Luthen has sacrificed. To which Luthen lists calm, kindness, kinship, and love, and having given up peace he now uses the weapons of his enemy against them. He tells Jung he has sacrificed everything, and urges Jung to continue his work. . .

High Points : Now this is how this series should work, the building tension is great as they prepare to escape from the prison, and then we get a release to that as the plan is set in motion. Andy Serkis is amazing, as the new convert to the escape, and how he does everything for the other prisoners, aware that the sea is the final barrier, and one he cannot overcome personally.
And finally, once again, Stellan SkarsgĂĄrd is astoundingly good, the speech he gives about everything he has sacrificed to fight the Empire is amazing, where he not only has sacrificed physical things, emotional things, but also his own ethics and standards to take the fight to the enemy. If for no other reason, Andor is remarkable for this character and the quality of acting that Stellan brings to it.
While a little rushed among everything else going on this episode, the scene between Mon Mothma and Davo Sculdun is interesting, how he feels out her beliefs in the arranged marriages of Chandrilian culture, before suggesting setting one up between their families, to bring his family within the establishment. Her rejection of this makes sense for the character, and his suggestion of it makes sense for the image she is portraying to the galaxy, lovely world building stuff.

Low Points : While this episode moves along nicely, I would be remiss if I didn't mention that while the tension in this episode did require building, we had TWO full episodes of Andor being in prison to build to this escape. The release that the escape gives us to this tension is great, but so much waiting for it to occur, especially as it doesn't begin until half way through this episode.
And for a series which is so slow moving as this one, the scenes with the ISB, with Mon Mothma, and with the events on Ferrix are all rushed and squashed in together, seemingly just to remind us that these storylines are progressing.

So what do you really think ? : A really excellent episode, the prison break is fantastic, and the acting continues to be excellent. This is what I wanted when I heard there was going to be an Andor series.

Final Words : What I really want now, is for the series to continue the action and speed of storytelling as we have the final two episodes. It'd be great if we continue to get Andor being chased as he escapes from the prison planet, some action involving Luthen and his involvement with the Imperial Spy, Jung (possibly having Syril Karn discover Jung's activities, and become his replacement at Dedra Meero's side).
But I'm concerned that the pace will once again go glacial, and we'll get an episode of Andor hiding out fearing capture, and planning from the Empire on the Rebel attack on Spellhaus, but we shall see . . . .