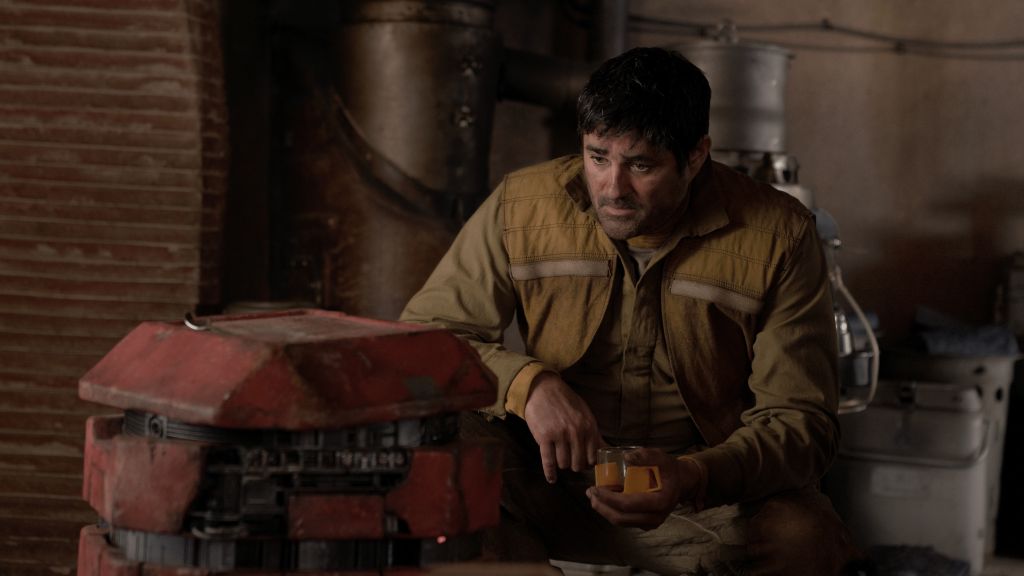 What is it ? : On Narkina 5, Andor and his fellow prisoner cling to a cliff face as a TIE Reaper searches for escaped prisoners. Evading it, they discover a couple of aliens with a Quadjumper starship, and they decide to steal it but are caught in net traps set up to protect the ship. The two aliens discuss handing in the prisoners for the bounty that has been put on their heads, but one of them is sympathetic, and help the two escape from Narkina 5.
Meanwhile on Ferrix Andors mother has passed away, his friends begin arranging her funeral, and her droid is hesitant to move on. Outside, Imperial watchers observe the activity, as does Cinta who is searching for Andor after his betrayal after the heist on Aldhani.
On Coruscant, Vel visits Luthen's antiques shop, speaking with his assistant letting her know of Andors mothers death, before leaving and visiting her cousin Mon Mothma. She observes Mothma's daughter taking part in rituals for arranged marriages, something she disagrees with, and knows Mothma does, but it is revealed in conversation that it is the daughters idea, and the possible way out of being caught for Mothma due to the money she has been channeling to the Rebellion.
Back on Ferrix, Bix is tortured as they show her an image and ask if it is the rendezvous who met with Andor, but she doesn't speak even though the image is not Luthen.
Syril Karn receives a communication from the Sergeant who led their failed activity on Ferrix, who tells him that Andors mother has died and Andor may attend the funeral. Gathering up some items, Syril prepares to leave.
Luthen arrives at a world where he meets with Saw Gerrera, Saw wants to join the mission against the power plant, and Luthen tells him no, revealing that the Empire knows of the attack. Saw quickly works out that the Rebels are going to be a sacrifice to keep Luthens contact secret. Luthen puts the decision to tell the Rebels at risk in Saws hands, and he slowly comes around to the sacrifice must happen for the benefit of the Rebellion, eventually deciding that sometimes people die in a war.
As Luthen departs, he is contacted by his assistant and told that Andors mother has died, and he considers attending to locate Andor. But She warns him against it, as there will be many other parties there who might identify Luthen.
As he considers, his ship is approached by a Arrestor class Cruiser, which locks it's tractor beams onto his ship and warns him to prepare to be boarded, even though he fakes his transponder signal.
Deploying countermeasures, which are caught in the tractor beam and shred it's emitter, he skirmishes with some Tie Fighters, and makes the jump to hyperspace.
Back on Ferrix, one of Andors friends receives a communication from him, asking to let his mother know he'll be alright, but they tell him she has died. Andor standing back on the beach planet with his fellow prisoner, passes the other man a blaster he has retrieved from his hiding place along with his money, and the two head their separate ways to get the story of the prisons out with less of a chance of being caught together. . .

High Points : Once again it's great to watch, and Stellan SkarsgĂĄrd and Genevieve O'Reilly are amazing to watch, the two characters are incredible, both making sacrifices for their beliefs, both being stretched to their absolute limits while having to keep an image of control and civilisation up to the world. Stellar stuff.
It also continues to look amazing, while some of the CGI in the space battle looks a little video gamey, most looks amazing and the sets and scenery are absolutely fabulous.

Low Points : But again the story passes at a glacial rate, and nothing much happens. Basically, Andors mum dies, and everyone is going to the funeral because they think they can catch Andor there. While the best scenes, with Saw and Luthen, and Mon Mothma and Vel, don't really progress the story at all, but are fabulous to watch.
This is putting a lot of heavy lifting into the final episode to wrap things up.

So what do you really think ? : I'm still enjoying watching the series, but it is slow, and I do wish things would happen. A lot of defenders of the series are saying that criticism is only because there aren't any space battles or lightsaber fights in it, making out that critics need the flashy stuff to keep them entertained. But since the summary of this episode could be "Andors mum dies and everyones going to the funeral to try to catch Andor.", without really missing anything else important to the overall plot, there's really not much storytelling going on here. There's lots of nice acting going on, there's little character moments, but really these are all garnish on the central plot, and there's nothing going on in the central plot.

Final Words : So one final episode to go, and everybody is going to Ferrix.
I'm guessing that the big moment will be a confrontation between Andor and Vel & Cinta, with Luthen coming in on Andor's side, and I'm guessing that him getting caught is going to be the big dramatic conclusion of the series, which will force Mon Mothma into fleeing, and even that seems dramatically very flat. But we shall see, as they hopefully have something big coming to try to get us to come back for season two. . .