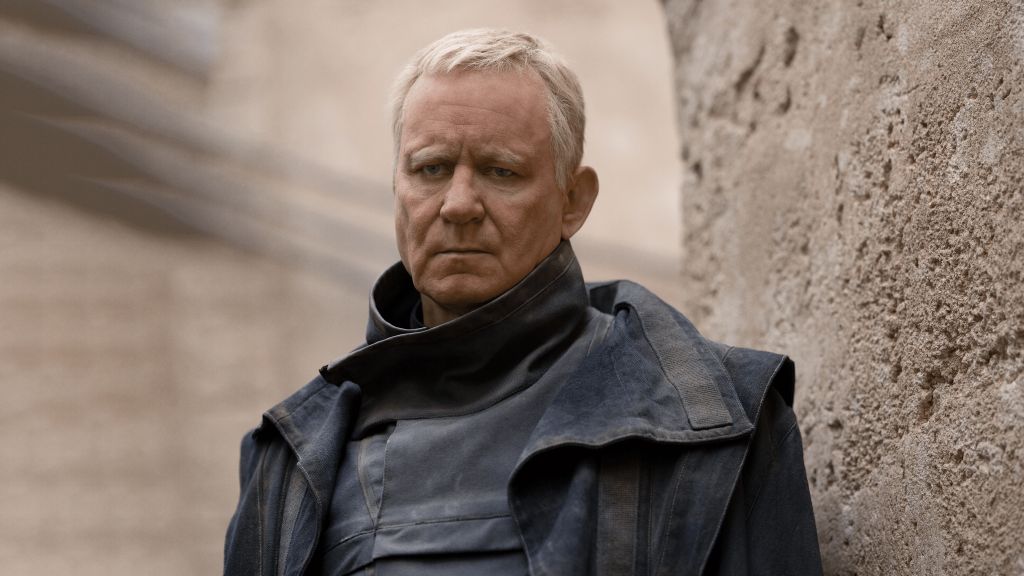 What is it ? : Everyone begins arriving on Ferrix to get Andor, Dedra Meero arrives in a Lambda Shuttle flanked by Death Troopers, Vel Arrives to meet with Cinta, but she is delayed as she stalks Dedra scouting out the town in disguise with an Imperial agent. Luthen arrives and is briefed by Vel, and finally Syril arrives with Linus Mosk his sergeant from his previous visit to Ferrix.
Andor then arrives and meets up with friends, and is told that Bix is still in Imperial captivity, so they plan to get him into the hotel which is used by the Empire as their headquarters on Ferric and free her.
On Coruscant, Mon Mothma has a falling out with her husband Perrin, scolding him over his gambling, as their driver listens in. Later we see him reporting to the ISB on this, and they suspect this is the reason that there has been rapid changes in Mothmas banking arrangements.
The ISB meets, with Major Partagaz announcing that the Rebel cell led by Kreegyr has been wiped out, over hologram, Dedra Meero wishes she was there to get over to everyone how this was a waste as they learn nothing from corpses. Partagaz tells her that this wasn't about gaining information, this was about redeeming themselves from the events on Aldhani, and if she wants information, she should capture Axis (Luthen Rael).
The funeral of Andors mother comes about, but it starts early so the Empire isn't ready, and at the end of the precession they play a recording of her calling on the people to act against the Empire. The local commander tries to stop the recording playing, but this starts a riot. As the troops react, Andor sneaks into the hotel and frees Bix.
The Imperial commander orders his men to open fire, and the riot turns into a slaughter. Meera is caught by rioters and is beaten, but then is dragged out by Syril, who she challenges and then thanks.
Luthen watches the riot, and then escapes, as Vel and Cinta remove all their equipment to cover their tracks.
Some of the rioters reach the shipyard where Andor used to borrow a ship from, and Andor meets them with Bix, leaving her in their care and telling them how to avoid pursuit.
Back on Coruscant, Mon Mothma and her husband introduce their daughter to the son of Runai Sculdun, fulfilling her part of the deal to cover up the payments she has been making to the Rebellion.
Luthen Rael boards his ship, and prepares to return to Coruscant but realises that someone is already aboard, confronting Andor. Andor asks if he came to Ferrix to kill him, indicating that he has returned the blaster Luthen gave his, telling him to do it, to which Luthen smiles. . . . .

After the credits, we see the parts than Andor was building in prison being used to anchor pieces of the superlaser dish of the Death Star together. . . .

High Points : So they bring everything back, even the guy that Andor owed money to and was confronted by in the first episode comes back to betray him to the Empire for money. Basically everyone from the entire series who was of any importance makes a reappearance in this episode, except Andy Serkis.
And the sense of doom in the episode is palpable, with it being obvious that this riot against the Empire isn't going to go well. We can see what it is building until, and the tension builds and builds until it is released in all it's terrible detail. Absolutely fantastic.
The finest scene in the episode to me is with Mon Mothma, Where she is in her speeder, berating her husband over his gambling. The realisation that she is setting up the man she is married to as cover for the money movements she has been making to the Rebellion is amazing. She, like Luthen, is betraying all her personal values to fight the Empire, the arranged marriage for her daughter, spinning stories of her husbands gambling, everything she values is just ammunition for the Rebellion. It took my breath away.

Low Points : But for bringing everyone back, they're in the whole pretty pointless. Andor rescues Bix, but she isn't much more than just a macguffin to keep Andor around and arrange the riot to cover the rescue of. A riot which leads to the deaths of multiple characters who seem about as important as her!
And the strongest element of the series, Stellan SkarsgĂĄrd, is left without any real dialogue or scenes which impress, mainly just standing on streets watching.

So what do you really think ? : Andor continues to be an amazingly acted, gorgeous looking, tale where nothing really happens. This episode is summed up as "Andor rescues a friend using a riot as a distraction.", and basically lands us back where Episode 3 had us, with him and Luthen together fleeing Ferrix. We get a nice Partagaz scene showing how the Empire works behind the scenes (working to gain the approval of the Emperor, not do the best job they can), and a wonderful scene with Mon Mothma, but these are beautiful decorations on a whole load of nothing really.
Don't get me wrong, its watchable, just very frustrating that it won't get on with the story.

Final Words : For a season finale, this really doesn't work very well. There's too many set ups, and too many continuing plotlines left hanging. Where will Luthen and Andor go from here? (but wasn't that the question 9 episodes ago?), how will Mon Mothma continue to cover her backing of the Rebellion? (again, wasn't that exactly what we were asking half a dozen episodes ago?), Will Andor see his friends again? (9 episodes ago, once again). The only real progress we've seen is the blossoming romance between Dedra Meero and Syril Karn, he's a total loser, but I kind of want him to find love.
And the post credits scene just made me laugh, the idea that it's all linked together shrinks the galaxy, and just ties everyone into the same story, and is just a silly as Cobb Vanth riding Anakin Skywalkers podracer while wearing Boba Fetts armour. It's possible they'll tie this in, by making the information Andor tells them about the prison on Narkina 5 be what leads them to investigating the Death Star in the first place (which kind of contradicts Rogue One, where Bohdi Rook's defection sets everything in motion), but really, do we need everything tied into a neat little bow with no space for a larger universe.