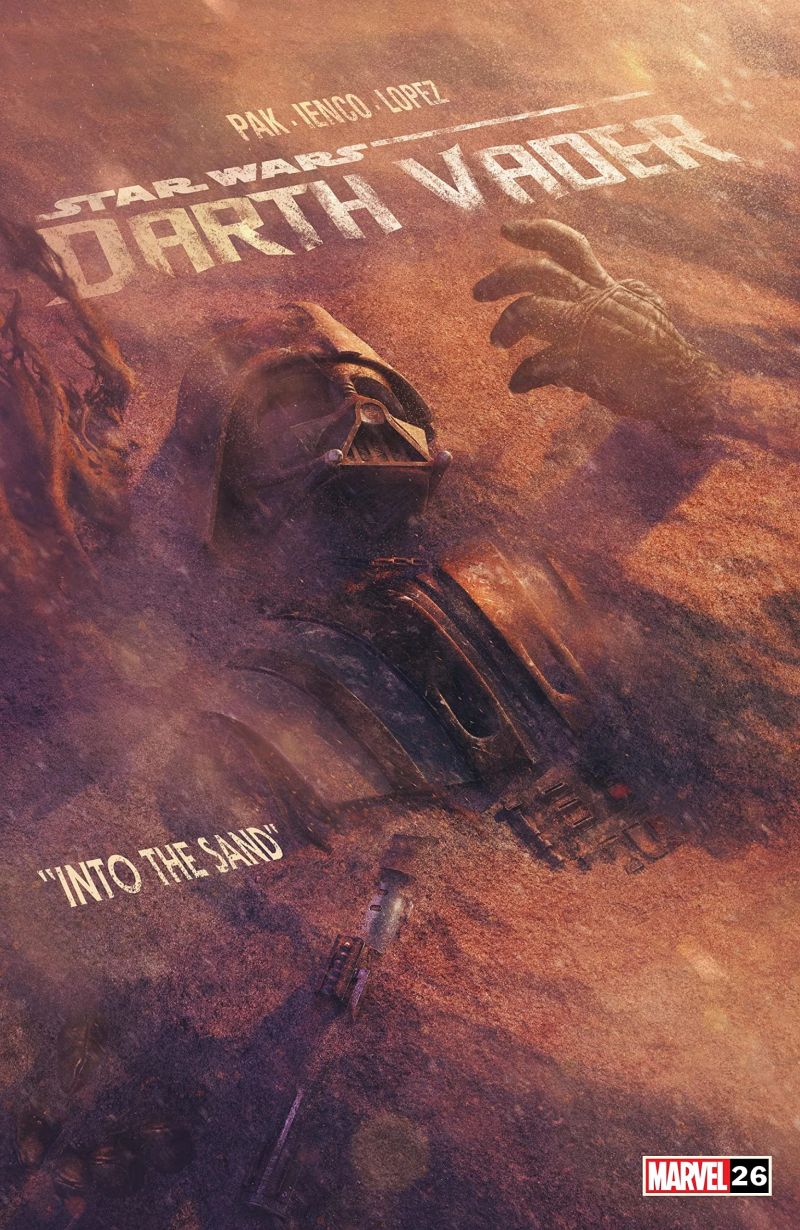 Darth Vader: Issue 26: The Shadows Shadow: Into the Sand

What is it ? : Vader remembers telling Padme he doesn't like sand, that it's rough and course and not smooth like her, while he looks at Kitsters Podracer considering heading into the sandstorm to rescue Sabe. Wald announces that no one but the greatest pod racer could pilot the vehicle into the sandstorm, and Vader remembers building his own podracer as a child, and Wald belittling his chance of winning a race in it.
He climbs about and activate the vehicle, speeding off into the sandstorm, he remembers his first time racing a podracer, and being lost in a sandstorm and rescued by his mother.
He remembers promising his mother during that sandstorm that he would never leave her, then remember Qui-Gon taking him away from his mother to the Jedi Temple on Coruscant where Yoda accuses him of fear because he missed his mother. Following through the path, to his fear leading him to the slaughter of the Sand People, and the death of his mother. He remembers Padme falling from the LAAT/i over Geonosis, and leaving her because Obi-Wan urged him to do his duty.
He powers through the memories and the Sandstorm, reaching Sabe and Kitster, freeing Sabe from under some wrecked machinery.
As Sabe begins to choke with the sand kicked up by the storm, Vader orders the Executor in orbit to fire all turbolasers on his position, Piett hesitates, but Vader chokes him, repeating the order "now".
The blasts disrupt the storm, and Vader cuts Kitster, Sabe and himself free of the wreckage, and carrying the unconscious Sabe he walks away.
Meanwhile on Coruscant, Palpatine has sensed what is happening, and says that Vader could not save his mother, could not save Padme, but thinks he can save Sabe before bursting into laughter. . . .

High Points : Well we're back to the flashbacks which have been missing lately, and it's nice to have some context for what's going on.

Low Points : But these really don't add much to the story, being very much "No one can pilot this podracer except someone who won the Boonta Eve championship!", wink, wink, nudge, nudge, remember how Vader used to be Anakin and he won the Boonta Eve Championship, well these characters don't know that. It's taking the inside knowledge which people should have of Vader and hammering it home for those that don't remember The Phantom Menace.
Also it seems to be making out that Anakin had some kind of fear of Sand, because he was lost in a sandstorm as a child. But this isn't something we've really seen before, he didn't like sand, but we've never even had it hinted that he had a deep down fear of sand.

So what do you really think ? : Apart from the flashbacks, basically Vader uses his childhood skills as a podracer, overcomes his fear of sane, to ride through a Sandstorm and rescue Sabe, and that's it. No revelations, no deep insights, no real progress in the story, it's a whole load of nothing really.

Final Words : So perhaps next issue we'll get back to the chase against the corrupt governor, but what that's got to do with the main plot of Vaders journey towards resisting the Emperor and eventually turning on him, and how it all fits in between The Empire Strikes Back and Return of the Jedi, really isn't clear.