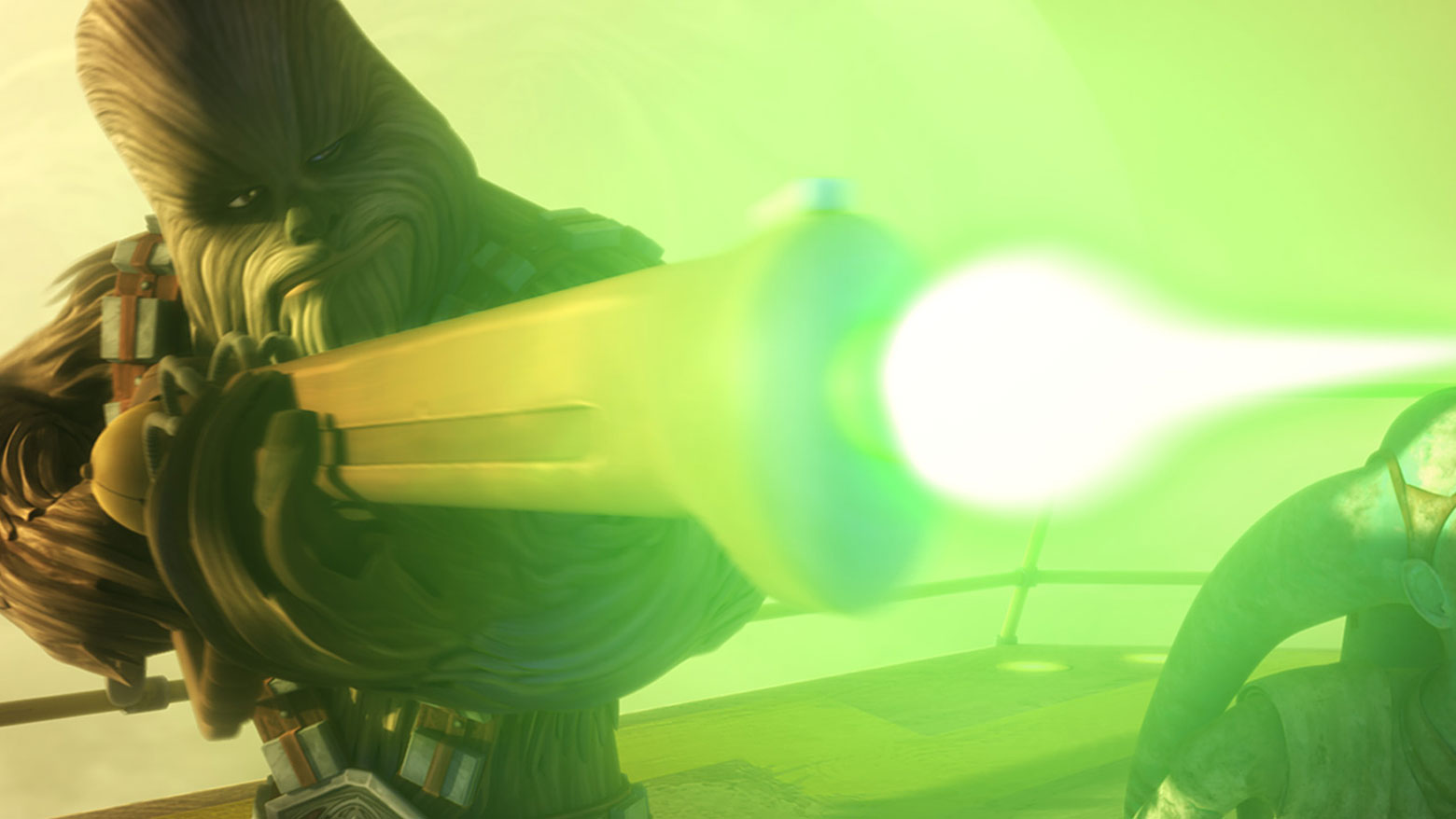 What is it ? : Ahsoka is still trapped on a moon of Trandosha by some Trandoshans, and is fleeing the site where the leader of the Younglings was killed. She returns to the younglings and they arrange an ambush on the Trandoshan ship when it returns to drop off more prisoners to be used in the hunt. They board and fight the Trandoshans aboard, but crash the ship, freeing it's single prisoner, Chewbacca.
The return to their camp, and Chewbacca explains the situation and comes up with a plan to build a communicator and request help from Kashyyyk which is in the same system.
Returning to the wreckage later, they gather the parts Chewbacca needs, and capture a Trandoshan Sniper who was lay in wait for them. After Chewbacca builds his communicator, they use the force to convince the Trandoshan Sniper to call for help so they can ambush the speeder and use it to board the Flying Fortress. Their plan works, but the number of armed Trandoshans works against them, but the odds are evened when General Tarfful and other Wookiees arrive. Ahsoka kills the leader of the by tricking him into falling, and the Wookiees take her and the younglings back to Coruscant where she is reunited with Anakin.

High Points : This is an excellent end for Season 3 of Clone Wars, in fact it's the end of a run of a dozen or so brilliant episodes. Clone Wars really has found it's feet and is making some excellent stories.

While the appearance of Chewbacca didn't excite me, I'm not keen on early appearances of classic characters, I have to say that the writing for his character was very well handled. His personality (or at least what personality you can tell from a Wookiee) seemed spot on, with him being a skilled technician as well as a powerful warrior.

Low Points : Nothing much I can complain about in this one, so just something I noticed neither good nor bad. When Ahsoka returns to Anakin at the end, she remarks that it was the skills he'd taught her that allowed her to survive, so his teachings were always with her. I found this incredibly ironic that she was praising the future Dark Lord of the Sith for the skills she'd found so useful, when she force pushed the Trandoshan leader off a balcony to his death earlier. But no matter, she'd not picked up all his talents, as she managed to rescue the younglings not butcher them.

So what do you really think ? : If Clone Wars can keep this standard, I'm definitely in for a treat over the next few months as I work through seasons 4, 5 and 6. I've heard there's some interesting storylines coming, and fingers crossed that with the skill in storytelling the series has shown building over the last season, they should be a job to watch.

Final Words : When I started watching Clone Wars I thought I was going to struggle with it, I'd seen bits and they'd not overly impressed me. But consider me a convert, Clone Wars has a number of very good episodes, and as time has gone on, the number of poor episodes has dwindled until it's now been almost 18 episodes since the last bad one. Consider me impressed.