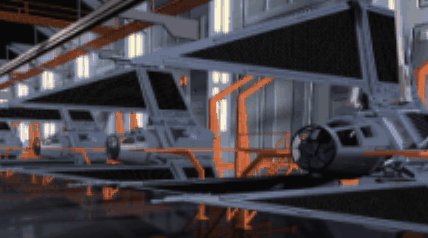 In my campaign of Star Wars, cloaking devices exist, and are used by many different sides in the conflict. However there exists no single version of this technology, as the various sides have each developed their own version, doing basically the same job, but in a slightly different manner. This document, hopes to detail how each system works.

While it is normally impossible to detect a cloaked ship, should it do something to breach its cloak (transmitting, firing weapons, etc) it becomes simply a difficult task to target it. Eg1 if scanning for ships while a cloaked vessel is talking on the radio, then a difficult sensors roll shows the location of the cloaked ship. Eg2 if during a battle a cloaked fighter opens fire, then the base target number to shoot it back is difficult (plus its dodge).

The Mandalorians, and their allies the Juannar, have developed and used cloaking devices for the past few decades. They are the only people to use cloaking technology in huge quantities, and almost every type of vessel they now build uses it.

Mandalorian cloaking technology is not true cloaking, but really just very advanced stealth systems, that lead to virtually the same end. These systems absorb all emissions heading towards the cloaked vessel, meaning that the ship is invisible (since light is absorbed rather than reflected), and offers no sensor return either so is just as invisible to sensors.

However this form of cloaking has several weaknesses.

1) The vessel has to be designed to use this form of cloaking, and it cannot be retrofitted into another vessel without major reworking of all its systems.

3) The cloaked vessel cannot use any active sensors while cloaked, since the energy emissions would be easily detected.

4) Force Shields cannot be used while cloaked, for the dual reasons of their energy emissions, and them radiating energy away, rather than absorbing it.

5) Weapons likewise cannot be charged (although decloaking and charging weapons is usually linked together on Mandalorian vessels) or the high energy emissions would be detected through the cloak.

6) The cloak has to be carefully used, since it absorbs all sensor emissions leaves a blank spot which normally cannot be noticed against the blankness of space. However if the cloaked vessel was to get in between a target vessel and another object (a planet or another ship) then the absorbed emissions would create an obvious hole in the sensor image of the other object.

While these features make the Mandalorian cloaking technology flawed, it is still an incredibly useful technology, allowing fleets to move around undetected, and enemy movements to be tracked by cloaked scoutships with relative ease.

Imperial Cloaking technology is based around the manipulation of gravity fields, which warps light, and energy around the cloaked vessel. This does make the vessel detectable by CGT (Crystal Gravity Trap) sensors, but is immune to detection by by other means (except the Force) no matter where the ship is,

Imperial Cloaking devices however have the unfortunate side effect of blocking the cloaked vessels own sensors and communications systems, rendering it completely blind and deaf. But the total blocking does work to the ships slight advantage, allowing it to use sheilds and weapons freely without endangering its cloaked status.

This weakness caused Imperial Cloaking technology to be abandoned for a long time, putting even the very successful Tie Phantom out of production until a solution was created.

The solution was found shortly after the start of the Imperial alliance with the Sith, and combined simlified CGT sensors with weak gravity well generators.

Using a very small Gravity Well generator, fluctuations could be created in the local gravity field, which could be detected by cloaked ships.

By combining these systems, it allowed cloaked fighters to be communicated with, and standard policy was that cloaked fighters were accompanied by a capital ship, or other command vessel, which would feed them sensor data, allowing them to fight while remaining cloaked.

While not as much of an edge as most cloaking technologies, this still gave the cloaked fighters a significant edge in battle, and allowed Imperial forces to minimise raids on convoys (because the transports could be feeding sensor data to cloaked fighters, there was no way to tell which convoys were being escorted, and which weren`t, it also became difficult to determine Imperial strength in any particular area).

The form of communication between the command vessel and the cloaked ships was also a point of strength and weakness in the system, firstly it could not be disrupted by jammers on A Wing fighters, or capital ships since it was gravity waves and not conventional signals. However, it was disrupted by full gravity well generators, meaning that the communications could not be used around interdictor cruisers or other gravity well deploying vessels.

New Republic scientists are working on ways to jam the gravity communications system, but current policy is to destroy the command vessel, forcing the cloaked fighters to decloak or be unable to continue battle.

The New Republic is currently without a functioning cloaking system, altough the Verpine hives in the Roche asteroids are working on a system, and have produced several flawed but functional prototypes.

Their work seems to combine elements of both Mandalorian and Imperial technologies, creating devices which allow the vessel to use passive sensors, communications systems, etc but not to give its location away by blocking all sensors. If successful this will be the best of both worlds, and superior to both of the rival designs, however power use is currently causing problems, with burn-outs being common on test vessels, and energy leaking through the cloak and giving the ships location away, but experiments are continuing.